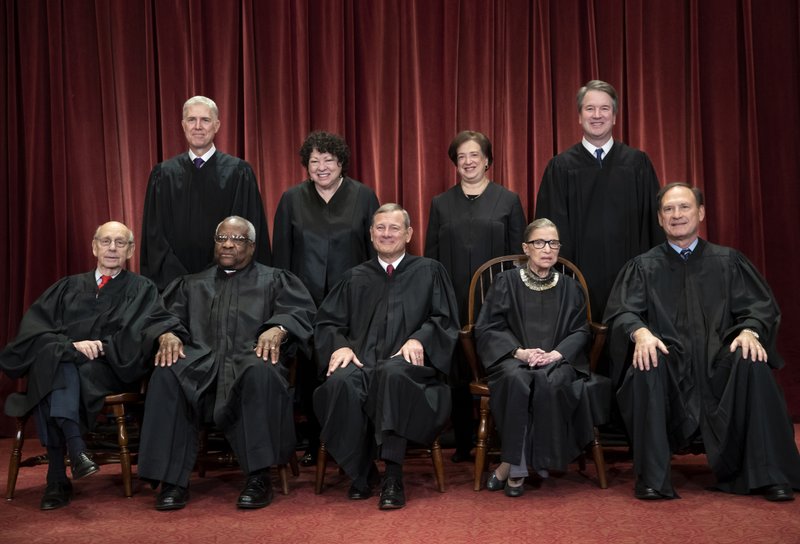 The US Supreme Court is back for Day Three of arguments by telephone with the audio available live to audiences around the world. You can listen live here starting at 10 a.m. Eastern.

The stakes are higher on Wednesday. There are two arguments scheduled, and there’s a more high-profile case.

This is the last day for arguments this week. The justices have three more days and six cases remaining next week.

The Supreme Court is back for Day Three of arguments by telephone with the audio available live to audiences around the world.

Here are some observations, trivia and analysis from our Supreme Court reporters (all times local):

The Supreme Court has wrapped up its first week of arguments by telephone, with live audio available also for the first time.

The three days of hearings were remarkably smooth, even as Justice Ruth Bader Ginsburg participated from her hospital room and Justice Stephen Breyer was briefly kicked off the line on Wednesday. The 87-year-old Ginsburg is being treated at a Baltimore hospital for an infection caused by a gallstone.

Breyer’s brief absence from the arguments came in a case about robocalls. When Breyer rejoined the call, he said he was cut off when someone had tried calling him.

The court Wednesday also heard arguments over Trump administration rules that would make it easier for employers to cite moral or religious objections in refusing to provide cost-free contraceptives to women, as required by the Affordable Care Act.

The justices will return to the phones next week for six cases over three days. Those include President Donald Trump’s efforts to shield his tax and other financial records and whether presidential electors must cast their Electoral College votes for the candidate who wins the popular vote in their state.

In Supreme Court phone arguments about robocalls, Justice Stephen Breyer says he got cut off when someone tried calling him.

Breyer said after he rejoined the court’s arguments Wednesday: “The telephone started to ring, and it cut me off the call and I don’t think it was a robocall.”

The court was hearing its second argument of the day by telephone because of the coronavirus pandemic. It was a free speech case involving a law aimed at protecting consumers from unwanted telemarketing calls.

Earlier in the day, the justices heard a case that involves the Affordable Care Act’s requirement that most insurers cover contraceptives for women.

The Supreme Court has finished its first phone argument for the day and quickly moved on to the second.

The court on Wednesday spent an extra 40 minutes beyond the allotted one hour for the first argument. It heard about Trump administration plans to make it easier for employers to get out from the requirement in the Obama-era health care law to provide women covered by their health insurance plans with cost-free contraceptives.

The justices took a break of only a couple of minutes before beginning the second set of phone arguments, about whether a 1991 law protecting consumers from unwanted telemarketers violates the First Amendment.

Justice Ruth Bader Ginsburg has been participating from a Maryland hospital where she’s being treated for an infection caused by a gallstone.

Supreme Court Justice Ruth Bader Ginsburg is participating in telephone arguments from a Maryland hospital where she’s being treated for an infection caused by a gallstone.

The court said Tuesday evening that the 87-year-old justice had undergone non-surgical treatment for a benign gallbladder condition. The court said she planned to participate in arguments from the hospital Wednesday.

Ginsburg’s first question was a lengthy one, essentially saying the Trump administration tossed “to the wind” the requirement in the Affordable Care Act that women have seamless access to no-cost contraceptives.

Because of Ginsburg’s seniority on the court she has been third to ask a question during this week’s telephone arguments, following Chief Justice Roberts and Justice Clarence Thomas. But Thomas apparently was having some technical difficulties when Roberts first called on him. Instead, Thomas followed Ginsburg with questions.

The court says Ginsburg is expected to be in the hospital for a day or two. It has said some justices are participating in arguments from home while others are at the court.

The Supreme Court has started Day Three of arguments it’s hearing by telephone because of the coronavirus pandemic.

The court again urged lawyers to use a landline, not a cellphone. There are two arguments Wednesday, and they’re more high-profile than the ones the court heard Monday and Tuesday. They’re scheduled to each last an hour, with a short break in between. The arguments Monday and Tuesday ran a few minutes long.

If you’ve been following along, then you know the drill: The justices will ask questions in order of seniority, after Chief Justice John Roberts goes first.

The court announced late Tuesday that Justice Ruth Bader Ginsburg is being treated for an infection caused by a gallstone and plans to participate from a Maryland hospital.

Before the justices is a case that involves the Affordable Care Act’s requirement most insurers cover contraceptives for women. The second argument is a free speech case involving a law aimed at protecting consumers from unwanted telemarketing calls.

The stakes are higher in the phone arguments the Supreme Court is set to hear Wednesday.

The high court will hear two arguments in one day over the phone because of the coronavirus pandemic, with audio provided live. The session is expected to last approximately two hours.

The higher-profile case is about a dispute over Trump administration rules that would allow more employers who cite a religious or moral objection to opt out of providing no-cost birth control to women. It stems from former President Barack Obama’s Affordable Care Act.

The second argument is a free speech case involving a 1991 law aimed at protecting consumers from unwanted telemarketing calls.

On Monday the court heard a case about Booking.com’s ability to trademark its name. On Tuesday the case was about federal money to fight AIDS around the world.

The Supreme Court’s foray into modern technology has gone smoothly. On Monday and Tuesday there were few glitches as the justices heard arguments over the telephone with audio available live for the first time in the court’s history because of the coronavirus pandemic.

But the stakes are higher Wednesday. There are two arguments in one day, and they’re more high profile. One case involves the Affordable Care Act, often called “Obamacare.” The other relates to unwanted telemarketing calls.

Justice Ruth Bader Ginsburg has an infection caused by a gallstone and plans to participate from a Maryland hospital.

The court heard one case per day on Monday and on Tuesday. Among the biggest surprises during arguments came from Justice Clarence Thomas, who once went 10 years between questions. In this format, Thomas has been speaking up, asking questions both days.

Justice Sonia Sotomayor forgot to unmute herself both days, but it was only for a moment. On Tuesday, she told Chief Justice John Roberts, “I’m sorry, chief. Did it again.”