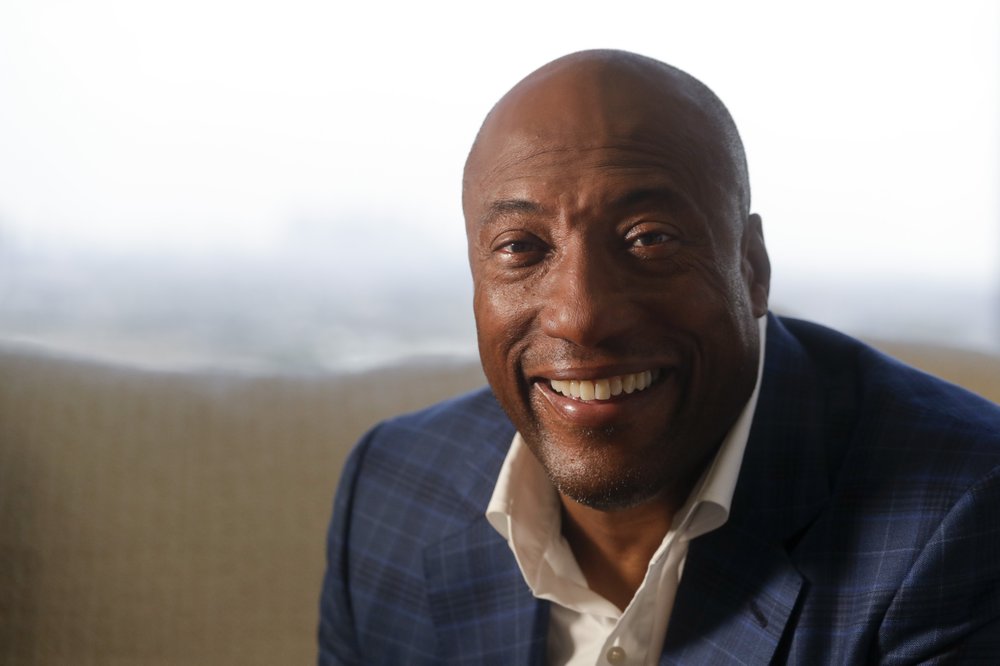 Comedian and media mogul Byron Allen poses for a picture Thursday, Sept. 5, 2019, in Los Angeles. The Supreme Court will hear arguments Nov. 13 in a $20 billion lawsuit Allen filed against Comcast, with the outcome also affecting a $10 billion case he filed against Charter Communications. If Allen wins, it will become easier for black-owned businesses to bring and win civil rights lawsuits like his that allege discrimination in contracting. (Photo: AP)

Comedian and media mogul Byron Allen wants TV viewers to watch the channels his company produces — from one that runs “Judge Judy”-like shows all day to those dedicated to comedy, cars, food and pets. But while many distributors carry Allen’s channels, two cable giants have refused.

Allen says the reason is that he’s black, and so he’s sued for racial discrimination. An appeals court has let his lawsuits go forward, but now the Supreme Court will weigh in and could deliver a setback.

The justices will hear arguments Nov. 13 in a $20 billion lawsuit that Allen filed against Comcast, with the outcome also affecting a $10 billion case he has filed against Charter Communications.

If Allen prevails, black-owned businesses will have an easier time winning suits that allege discrimination in contracting. If Comcast wins, the bar will be high to bring and succeed with similar suits.

The question for the justices is whether Allen needs to show that race was just a factor in Comcast’s decision not to offer him a contract or whether it was the sole factor.

Allen said his case is about getting rid of institutionalized racism. Pursuing that claim, he said, “is one of the greatest things I’ve ever done in my life” and “one of the things I’m most proud of.”

A trial court dismissed Allen’s suit three times before an appeals court, according to Comcast, wrongly let it go forward . The Trump administration has sided with Comcast.

Allen, 58, began his route to media mogul as a child when his family moved from Detroit to Los Angeles. His mother got a job at NBC, which meant Allen hung around the studios. He would see Johnny Carson tape “The Tonight Show” and comedian Flip Wilson rehearse for his variety show.

As a teenager, Allen began doing comedy himself, and he appeared on the “Tonight Show” for the first time when he was 18. That led to a job as a host for reality television forerunner “Real People” while he was a student at the University of Southern California. Ultimately, Allen’s interests turned to the business of television, and in 1993 he founded his own media company.

Today his Los Angeles-based Entertainment Studios has 10 television networks, including Cars.tv, Comedy.tv, Pets.tv, Recipe.tv and JusticeCentral.tv. Last year, he bought The Weather Channel . He also has a movie distribution company.

But Comcast and Charter Communications, the nation’s two largest cable providers, have passed on carrying Allen’s channels. Other distributors including Verizon FIOS do carry the channels. So do the now-merged AT&T and DirecTV after Allen sued them and they settled.

Comcast has called Allen’s suit “a scam,” saying it and others that Allen filed were intended to generate media attention and timed to exploit when the companies were working on mergers. Comcast has noted that Allen originally sued Comcast but also civil rights groups including the NAACP and National Urban league, saying they had conspired to discriminate against him. Comcast has called the allegations preposterous.

“This is really a run-of-the-mill carriage dispute that has been dressed by Mr. Allen in the garb of racial discrimination for purposes of his own,” said Comcast lawyer Miguel Estrada.

But Skip Miller, one of Allen’s lawyers, said Allen’s channels are “perfectly good channels” and “popular programming in many areas.” Miller said he cannot see any legitimate reason that Comcast and Charter would refuse to carry them.

“There’s no reason, no reason in our opinion, other than he’s black,” Miller said.

Allen sued Comcast in 2015, pointing to Section 1981 of the Civil Rights Act of 1866 . Enacted a year after the Civil War ended, the law bars racial discrimination, saying all people should have “the same right ... to make and enforce contracts ... as is enjoyed by white citizens.”

Allen and his lawyers argue that to sue under the law and win, he only needs to show that his race played a factor in Comcast’s decision not to offer him a contract. Comcast says Allen has to demonstrate that he didn’t get a contract solely because of his race.

No matter what the justices decide, Allen is prepared to make either argument and for the case to continue after the Supreme Court’s decision, his lawyer said. This past week he got support from the Los Angeles Urban League, which threatened Comcast with a boycott and other action if it doesn’t drop the case.

“This case is bigger than me,” Allen said.