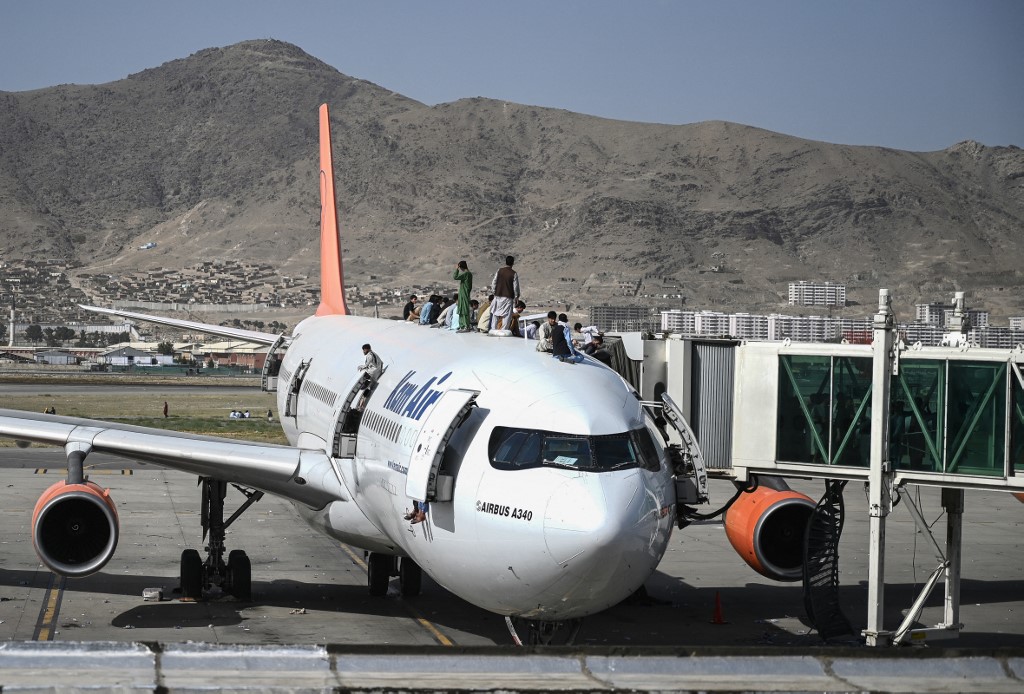 Afghan people climb atop a plane as they wait at the Kabul airport in Kabul on August 16, 2021. (Photo: AFP)

Frantic Afghans trying to flee the Taliban takeover clung to an American plane as it prepared to take off from Kabul airport, as thousands of people desperately searched for a flight out of the country on Monday.

US troops fired shots into the air and all commercial flights were cancelled as chaos broke out on the tarmac.

Dramatic footage posted on social media shows hundreds of men running alongside a US Air Force plane as it rolls down the runway, with some clinging to the side of it.

In other videos, civilians frantically clamber up an already overcrowded and buckling set of airstairs.

Crowds watched on, as those who successfully climbed the stairs helped others up, while some hung from the stair railings by their hands.

Panicked families with frightened children in tow and laden with luggage were trying to escape the incoming Taliban regime, two decades after the group’s harsh rule was toppled by a US-led invasion.

"I feel very scared here. They are firing lots of shots into the air," the witness said, asking not to be named in case it jeopardised his chances of leaving.

The US State Department said American troops had secured the perimeter of the airport as they evacuate embassy employees and thousands of Afghans who worked for Washington's interests since they toppled the Taliban in the wake of the September 11 attacks.