WORLD Kavanaugh accuser wants to talk to Senate; terms up in air

Kavanaugh accuser wants to talk to Senate; terms up in air 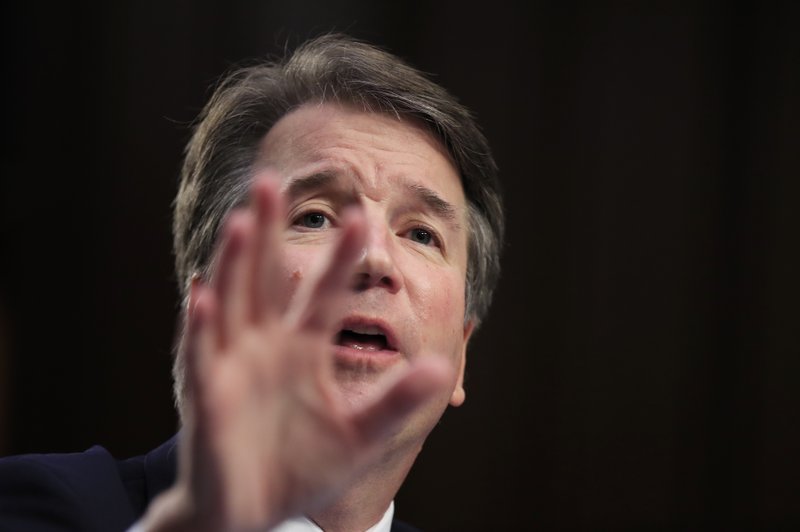 The woman accusing Supreme Court nominee Brett Kavanaugh of a decades-old sexual assault has accepted a Senate committee’s request to tell her side next week but Christine Blasey Ford wants to resume negotiations over the exact terms of her appearance, her lawyers said Saturday.

It was not immediately clear whether the Republican-run Senate Judiciary Committee would agree to more talks with Ford’s team. Also unclear was when she might come to Capitol Hill and she was offering to speak in a public session or a private one. The committee wanted her to appear Wednesday, but she prefers her earlier request for Thursday, according to a person familiar with the negotiations who was not authorized to discuss the matter publicly.

Her lawyers’ letter to the committee’s GOP majority was released just at the 2:30 p.m. deadline set by the chairman, Sen. Chuck Grassley, to respond to the panel’s latest offer. Grassley, R-Iowa, had set a possible Monday vote to decide whether to recommend Kavanaugh’s nomination to the full Senate.

As Republicans were considering their next move in private talks Saturday, they also made it clear they viewed Ford’s offer as a way to delay voting on President Donald Trump’s pick for the court.

The White House views Ford’s potential testimony with trepidation, nervous that an emotional performance might not just damage Kavanaugh’s chances but could further energize female voters to turn out against Republicans in November against the backdrop of the #MeToo movement.

Moreover, the West Wing aides who had urged Trump to remain muted in his response to the accusations worried about how the president might react if she ended up partaking in an hourslong, televised hearing. In a single tweet Friday, Trump broke his silence to cast doubt on Ford’s story in ways Republicans had been carefully trying to avoid.

Trump mused to confidants that the “fake” attacks against his nominee were meant to undermine his presidency, according to a White House official and a Republican close to the White House. Both spoke on condition of anonymity because they were not authorized to discuss private conversations.

Other Republicans scoffed at Ford’s willingness to accept the committee’s request to tell her story.

“When?” tweeted the No. 2 GOP Sen. John Cornyn of Texas, a member of the committee.

The lawyers for Ford wrote that she “accepts the Committee’s request to provide her first-hand knowledge of Brett Kavanaugh’s sexual misconduct next week.”

Attorneys Debra Katz and Lisa Banks said many aspects of Grassley’s latest offer were “fundamentally inconsistent” with the committee’s promise of a “fair, impartial investigation.” They said they remained disappointed by the “bullying” that “tainted the process.” Yet they remained “hopeful that we can reach agreement on details.”

It was unclear whether Grassley would permit more negotiations Saturday, with patience among Republicans is running thin. The GOP is facing enormous pressure from its base of conservative leaders and voters to swiftly approve Kavanaugh, who would become the second of President Donald Trump’s nominees to sit on the nation’s highest court, before the Nov. 6 election.

A spokesman for GOP Sen. Mike Lee of Utah, a committee member, tweeted that Ford “agreed to nothing. She rejected the committee’s offer to testify Wednesday.”

Earlier Saturday amid the latest deadline standoff Vice President Mike Pence called Kavanaugh “a man of integrity with impeccable credentials.” He expressed confidence that Republicans “will manage this confirmation properly with the utmost respect for all concerned” and said he expected Kavanaugh to join the high court soon.

Grassley had set a Friday night deadline for the 51-year-old California psychology professor to agree to the committee’s latest offer setting terms for her appearance. Grassley said that if she missed that deadline, he would scrap the hearing and his committee would vote on sending Kavanaugh’s nomination to the full Senate.

Ford’s lawyers asked for another day. In a tweet aimed at Kavanaugh shortly before midnight, Grassley said he was giving them additional time.

“She shld decide so we can move on. I want to hear her. I hope u understand. It’s not my normal approach to b indecisive,” Grassley wrote.

Ford’s accusations and the standoff over the terms of her appearance have left the appeals court judge’s confirmation in jeopardy. And just seven weeks from an election in which Democrats are hoping to capture control of the House and maybe the Senate, her emergence also has drawn intensified attention to the #MeToo movement’s focus on sexual abuse.

Ford says an inebriated Kavanaugh pinned her on a bed, muffled her cries and tried removing her clothes when both were teenagers in the 1980s. Kavanaugh has denied doing this and said he wants to appear before the committee as soon as possible to clear his name.

In backing away from his deadline, Grassley underscored the sensitivity with which Senate Republicans have tried handling Ford. Moderate female voters will be pivotal in many races in the elections and the #MeToo movement has elevated the political potency of how women alleging abuse are treated.

In requesting another day to decide, Katz called Grassley’s original deadline “arbitrary” and said its “sole purpose is to bully Dr. Ford and deprive her of the ability to make a considered decision that has life-altering implications for her and her family.”

Earlier Friday, Grassley rejected concessions Ford wanted if she is tell her story publicly before the committee.

Grassley turned down Ford’s request that only senators, not attorneys, be allowed to ask questions. The committee’s 11 Republicans — all men — have been seeking an outside female attorney to interrogate Ford, mindful of the election-season impression that could be left by men trying to pick apart a woman’s assertion of a sexual attack.

He also rejected her proposal that she testify after Kavanaugh, a position lawyers consider advantageous because it gives them a chance to rebut accusations.

Grassley’s stance reflected a desire by Trump and GOP leaders to usher the 53-year-old Kavanaugh onto the high court by the Oct. 1 start of its new session and before the November elections, when Democrats are mounting a robust drive to grab congressional control.

Friday was the latest in a string of tumultuous days for Kavanaugh, whose ascension to the Supreme Court seemed a sure bet until Ford emerged last weekend and provided details of the alleged assault.

Earlier, Trump ended a week of constraint and sarcastically assailed Ford, tweeting that if the episode was “as bad as she says,” she or “her loving parents” surely would have reported it to law enforcement.

Trump’s searing reproach defied the Senate Republican strategy, and the advice of White House aides, of not disparaging Ford while firmly defending his nominee and the tight timetable for confirming him.

The president’s tweet brought blistering rejoinders from Democrats and a mix of silence and sighs of regret from his own party. Republican Sen. Susan Collins of Maine, who hasn’t declared support for Kavanaugh, called the remark “appalling.”

Grassley rebuffed other Ford requests, including calling additional witnesses. Ford wants an appearance by Mark Judge, a Kavanaugh friend who Ford asserts was at the high school party and in the room where the incident occurred.

Grassley consented to other Ford demands, including that she be provided security and that Kavanaugh not be in the hearing room when she testifies.

Ford’s request for security comes after her lawyers said she has relocated her family due to death threats.