WORLD Kentucky teachers stage 'sick out' to protest at legislature

Kentucky teachers stage 'sick out' to protest at legislature 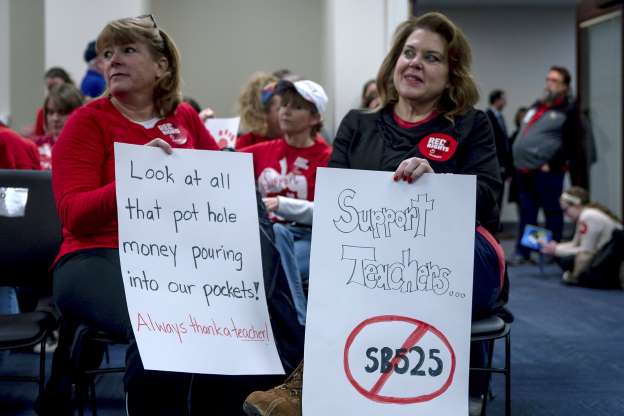 Kristin Walker, a Jefferson County teacher sits in a hearing room waiting to protest the passage of a bill that would change how individuals are nominated to the Kentucky teachers retirement systems board of trustees, in Frankfort,, Ky, Thursday, Feb. 28, 2019. (Photo: AP)

At least six Kentucky school districts were forced to close on Thursday — including the two largest systems in the state — as a wave of teachers called in sick to protest what one leader called "half-truths" and "shadiness" at the state legislature.

The "sick out" was organized by the group KY 120 United, a reference to the state's 120 counties, which encouraged teachers in a Facebook post Wednesday night to call in sick.

Within hours, the state's two largest school districts in Jefferson and Fayette counties announced they would close because they did not have enough teachers to cover classes. Districts in Marion, Carter, Letcher and Boyd counties were also closed on Thursday. In Fayette County, officials said at least 40 percent of teachers called in sick.

The protest comes on the same day lawmakers in the Republican-controlled state legislature were scheduled to discuss House Bill 525, a proposal that would change how people are nominated to the Kentucky Teachers Retirement System's board of trustees. But Nema Brewer, one of the group's leaders, said the protest is not targeting one specific bill.

"This is (about) a series of kicks in the teeth. And the dog is now ready to fight back," she said.

Specifically, Brewer said teachers are angry that GOP leaders suspended a bipartisan working group that was examining potential changes to the pension system. They also are concerned about Senate Bill 257. It adds gender neutral language to the state's pension law, but Brewer said teachers worry that lawmakers will use it as a vehicle for a more expansive pensions overhaul.

Kentucky's pension systems are among the worst funded in the nation. State officials are at least $39 billion short of the money required to pay benefits over the next 30 years.

Lawmakers have made changes to the system that oversees state and local government employees. But they have been unable to make changes to the Kentucky Teachers Retirement System. Teachers are well organized and oppose anything they see as a threat to their profession.

Thousands marched at the state Capitol last year to protest a Republican-backed bill that would have put all new teacher hires into a hybrid pension system. Lawmakers passed the bill anyway, but the state Supreme Court struck it down in December on a procedural issue.

Republican lawmakers appeared dismayed on Thursday as teachers gathered in the committee room. Republican state Rep. Ken Upchurch, who sponsored House Bill 525, said "It is staggering that people would strike so early in the process, and more astonishing that the organization that says they represent teachers' best interests has called for it."

Upchurch said he has been working on an amendment to the bill that would "increase the say teachers have."

Republican Rep. Jason Nemes told WHAS radio he was on the phone with teachers in his district on Wednesday until after midnight, saying they "are scared."

Thursday's protests are likely to stir up the Democratic primary for governor, where several candidates are courting the support of teachers upset with the Republican-dominated state legislature and Republican Gov. Matt Bevin.

Democratic candidate Adam Edelen called House Bill 525 "political retribution against Kentucky's teachers for having the guts to stand up to Matt Bevin and Frankfort politicians." Another candidate, Attorney General Andy Beshear, was on his way to the scene.