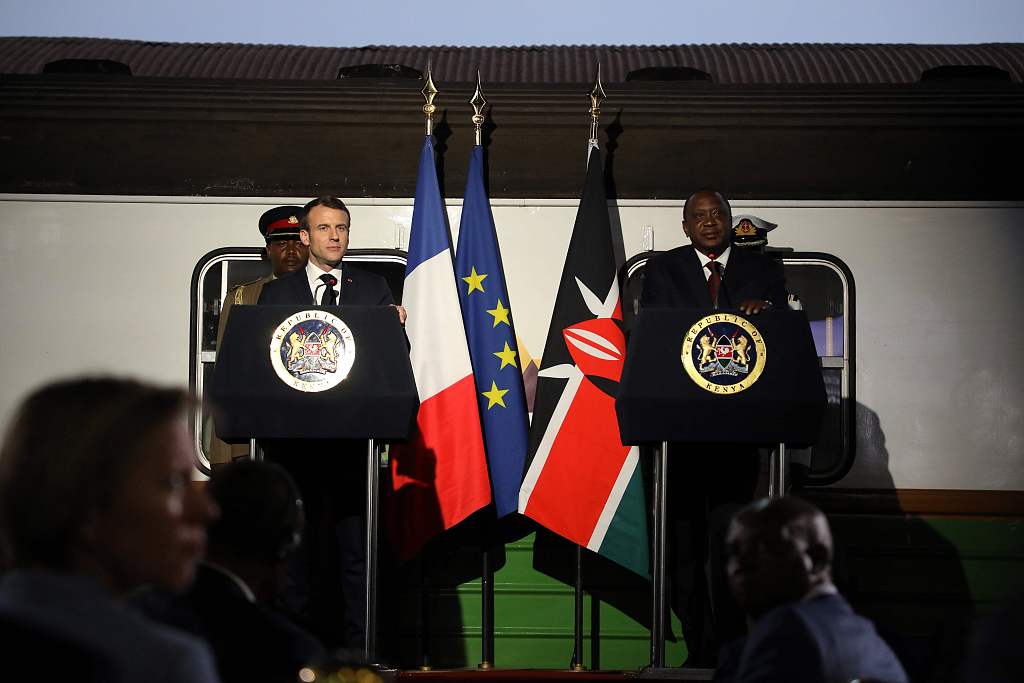 French President Emmanuel Macron (L) and Kenyan President Uhuru Kenyatta give a joint statement during an event at Nairobi Central Railway Station in Nairobi on March 13, 2019, on the first day of a state visit to Kenya. (Photo: VCG)

France is committed to working together with Kenya in several areas of mutual interest, among which are trade, investment, infrastructure, security and counter-terrorism activities, said French President Emmanuel Macron after the signing of the agreements in Nairobi.

"We also want to open a new partnership on the economy; we will sign a series of new agreements in order to develop public and private partnerships," Macron told at a joint news conference with Kenyan President Uhuru Kenyatta.

Macron is accompanied on his two-day state visit by a large group of businessmen and investors who will meet with government agencies and private sector players in Kenya to explore opportunities for investment.

Macron's visit is the first by a French president to Kenya since the eastern African country became independent from Britain in 1963.

Kenyatta said France continues to be one of the most important contributors to Kenya's tourism sector, and expressed optimism that the visit by Macron will help increase the number of French tourists visiting Kenya.

"This is good for Kenya and for our development," Kenyatta said. Today, France has become Kenya's major trading partner. "My expectation is that France will grow into an even more important trading partner for Kenya as a result of this visit."

The two presidents launched the Peugeot 3008 SUV, one of the models locally assembled at the Kenya Vehicle Manufacturers (KVM) in Thika, about 35 km northeast of Nairobi, by French vehicle manufacturer Groupe PSA.

The assembling of Peugeot 3008 began in September 2017, and that of two additional models are scheduled to start in April and September.

Kenyatta said when the KVM plant is fully operational, Groupe PSA hopes to assemble at least 15,000 vehicles annually in Kenya for both the local and regional markets.