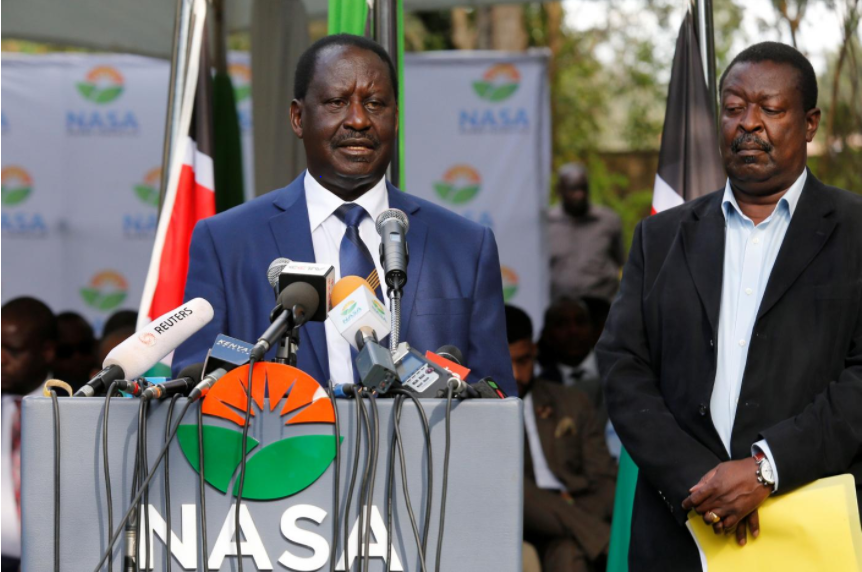 Kenyan opposition leader Raila Odinga on Tuesday called for pickets and petitions against an election he boycotted last week won by President Uhuru Kenyatta but stopped short of appealing for mass protests or announcing a court challenge to the result.

Odinga pulled out of the vote saying it would be unfair because the election board had failed to implement reforms after the Supreme Court cited procedural irregularities and annulled an Aug. 8 vote that had been won by Kenyatta.

Odinga said the Oct. 26 result would not stand but did not announce measures likely to overturn it or force the government to negotiate. He said his opposition coalition would form a people’s assembly to study issues of governance and issue recommendations to county assemblies.

“The resistance movement shall be responsible for implementing a vigorous positive political action program that includes economic boycotts, peaceful processions, picketing and other legitimate protests,” he said.

“This election must not stand .... It will make a complete mockery of elections and might well be the end of the ballot as a means of instituting government in Kenya. It will completely destroy public confidence in the vote,” he said.

The ruling party controls a majority in both houses of parliament and most of the 47 county governorships, making it difficult for the opposition to implement its proposals.

Odinga’s proposals left many of his supporters confused.

“I don’t understand what he wants,” said Felix Wanga, a 25-year-old waiter who listened to the speech in Kisumu, the western city that forms the bedrock of Odinga’s support.

“I will have to wait until tomorrow to hear from our local leaders.”

On Monday, Kenyatta was declared the winner of the repeat presidential election with 98 percent of the vote, handing him a second five-year term at the helm of the region’s richest economy.

In a sign of the tensions raised by the election, Odinga’s speech was delayed when the media walked out en masse after his supporters assaulted two journalists, whom they accused of bias. Odinga apologized for the incident.

The election crisis had blunted growth in Kenya, a trade and diplomatic hub for east Africa and a headquarters for multinational companies because of its relatively free market, pro-Western diplomacy and stability.

Around 50 people died in political violence after the Aug. 8 elections, and another 14 people since Thursday’s vote, according to diplomatic sources. A provisional government tally said nine people had been killed since Thursday.