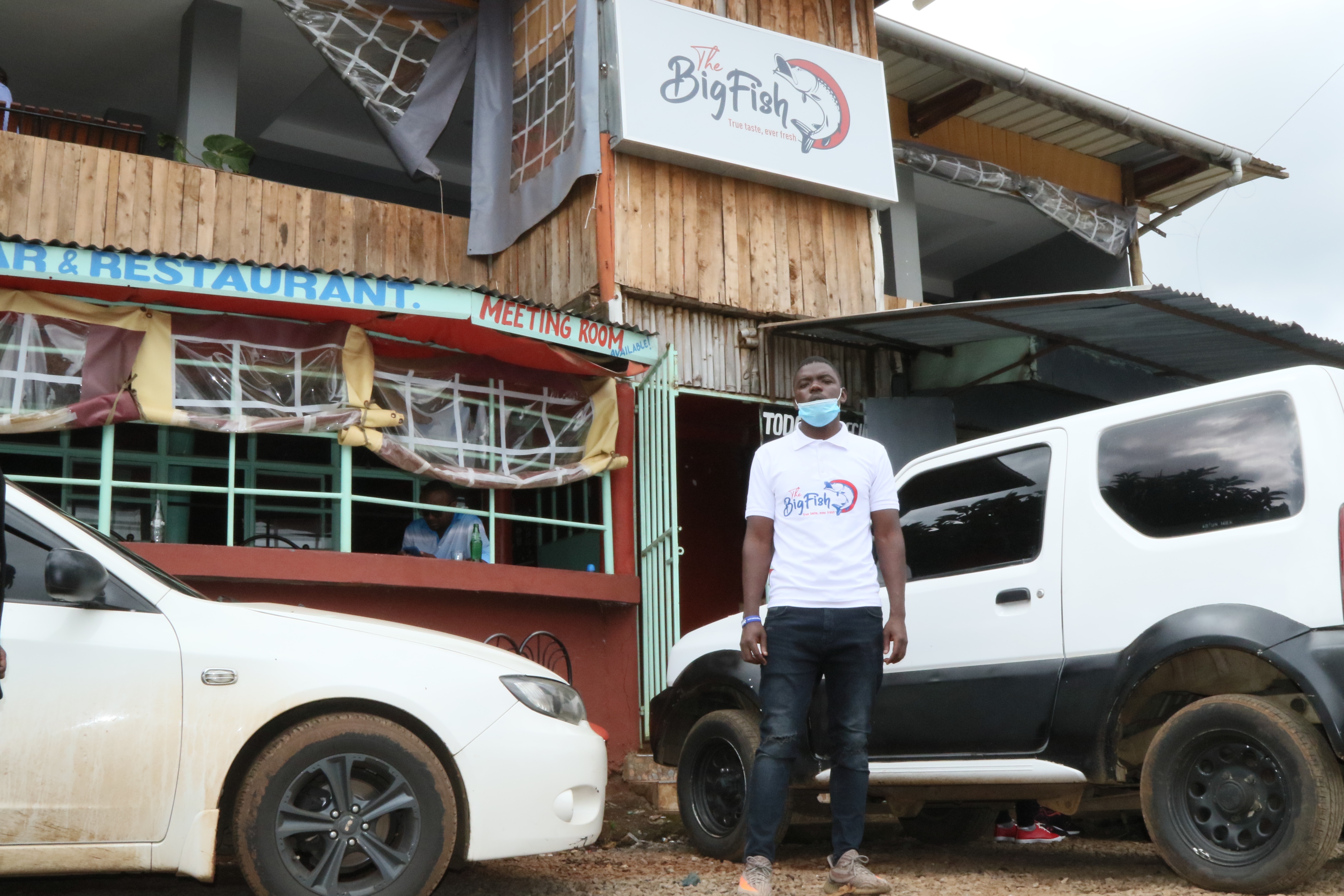 Bradox Osumo, co-owner of The Big Fish restaurant, is seen in front of his second outlet along Nairobi's Thika superhighway. (Photo: chinadaily.com.cn)

Like many young Kenyans, Bradox Osumo graduated from university in 2016 but spent two years trying to land a job. With rising levels of unemployment in the country, Osumo tried to look for gainful employment to no avail.

To keep busy, the jobless biochemist decided to help his sister with her side business. With times becoming tough even for the employed, Osumo's sister, who worked as a teacher, would sell fish and fried fish in the evening in the neighborhood.

"Since I could not land a job, I decided to help my sister in her fish business because she still had to work as a teacher. I managed to convince my sister that we needed to erect a small structure where we could serve dine-in customers. Initially, she only sold take-away fish to passers-by. That is how The Big Fish restaurant started," Osumo said.

He partnered with his sister in August 2018 and started growing the restaurant but their big break came in 2019 when Osumo's tweet about the meals went viral on Twitter.

"I think my post went viral because it depicted a very simple restaurant with very well done fish, but at a very affordable price. By the time the post was going up, I only had about 300 followers on Twitter but when it went viral, the number of followers and inquiries about my fish spiked," Osumo said.

Once interest in the restaurant began growing online, Osumo and his sister realized that their small facility with three tables and 10 chairs could not meet the growing demand. That's why they secured an additional facility and opened the restaurant's second branch, which has grown to become the favorite for Nairobi's young people who love fish.

"Our first restaurant still runs and is slowly expanding. However, to meet the sharp rise in demand we had to get a bigger space. When I put that first post on Twitter, I did it because I believed in our business and that we can offer something different. However, the overwhelming response, especially when the post went viral, came as a surprise," Osumo Said.

Taking advantage of his new-found fame, Osumo has been using social media, especially Twitter, to grow his business. From a few hundred followers, Osumo now has almost 21,000 and interest in his fish is still growing. Through his Twitter page, customers now can make orders for delivery.

According to the budding fishmonger, online recognition came at the right time for his business. Since his post went viral in late 2019, the business started expanding, and by the time the first case of the novel coronavirus was announced in Kenya in March 2020, the second branch was up, running and growing more famous.

"Were it not for the reputation I built on Twitter, our business would not have survived the pandemic. We have definitely been affected by the virus because we cannot work at full capacity due to social distancing requirements," Osumo said.

"In addition, before the pandemic we would serve our customers up to midnight, but the curfew introduced meant that we had to close at 7 pm. However, the fact that we had just expanded by opening a bigger branch and were becoming known online has helped us manage through the pandemic," he added.

Osumo believes that despite the pandemic, youth who have been affected by job losses should not be afraid of using their love for technology to create opportunities. He adds that youth today have the advantage of showcasing their skills through social media at no cost and they should take advantage of it.

"I would like to encourage my fellow youth not to shy away from using technology to promote themselves. As long as you believe in your trade, be bold enough to share it with people on social media and be consistent about it. Today most people have smartphones and even one share or like on social media is good for business," Osumo said.