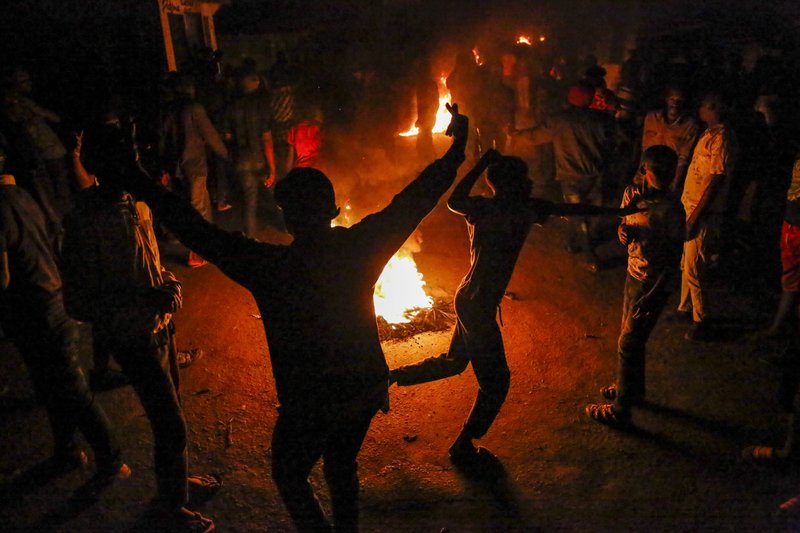 In this photo taken Monday, June 1, 2020, residents burn fires late at night on a street to protest the death of James Mureithi, a homeless man who protesters alleged was shot dead by police during the nightly dusk-to-dawn curfew established to curb the spread of the coronavirus, in the Mathare slum, or informal settlement, of Nairobi, Kenya. Hundreds of people in Mathare left their homes and burnt tires on the streets in the latest outrage over alleged police brutality, with a rights activist claiming that 19 Kenyans from low-income neighborhood have died from police actions in enforcing the curfew. (Photo: AP)

Residents of a slum in Kenya’s capital have protested the death of a homeless man who they said was killed by police for violating a dusk-to-dawn curfew for the coronavirus.

Hundreds of people in Mathare left their homes and burnt tires on the streets Monday night in the latest outrage over alleged police brutality.

“The pathologist I talked to said my brother was shot twice; one on the legs and the other on the chest,” Njagi told The Associated Press. “The pathologist said the chest wound was at close range.”

He said Mureithi was a university-educated automotive engineer who suffered a mental breakdown after divorcing his wife 10 years ago.

Police did not respond to a request for comment.

Local elder Stephen Wesonga said Mureithi was well-known in the slum as he used to walk around collecting recyclables to sell.

Rights activist Boniface Mwangi asserted that 19 Kenyans have died from police actions in enforcing the COVID-19 curfew, all from low-income neighborhoods.

He said the Kenyan deaths and the global protests over the killing of George Floyd in the U.S. show that “struggles against police brutality are the same everywhere.”

People are more afraid of the police than COVID-19, Mwangi said.

He said activists are planning demonstrations and had hesitated before because they feared arrest that could lead to six months in jail for illegal assembly — or 14 days in a quarantine facility.

A statement Tuesday by the Independent Policing Oversight Authority, established by Parliament, said 15 deaths and 31 incidents where people sustained injuries have been directly linked to actions of police officers during curfew enforcement.

The authority said it has dispatched teams to investigate another six deaths allegedly linked to the police since May 29, including that of Mureithi.

Also Tuesday, Kenya’s director of public prosecution ordered the arrest and prosecution of a police officer in the death of 13-year-old Yasin Hussein Moyo, who was shot dead while standing on his family’s balcony in March as police moved through his crowded neighborhood enforcing the curfew. Police at first said he was hit by a stray bullet.