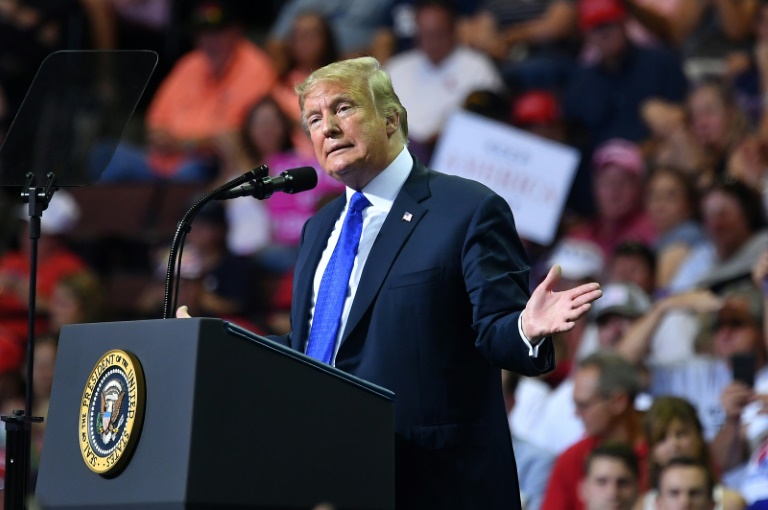 In an election speech in Mississippi Tuesday, President Donald Trump mocked Christine Blasey Ford, the woman who has accused Supreme Court nominee Brett Kavanaugh of attempting to rape her in 1982. (Photo: AFP)

Three Republican senators key to Brett Kavanaugh's approval to the US Supreme Court blasted Donald Trump Wednesday for mocking the woman accusing his nominee of sexual assault, as he played to a crowd of thousands at a political rally.

Senator Lisa Murkowski called Trump's speech "wholly inappropriate" and "unacceptable" while Senator Jeff Flake, the third Republican swing vote, said there was "no time and no place for remarks like that."

"To discuss something this sensitive at a political rally is just not right. I wish he hadn't done it. It's kind of appalling," Flake said.

The stern lawmaker reactions raised fresh doubts over the fate of Kavanaugh, as the Federal Bureau of Investigation reviews allegations by three women that the appeals court judge drank heavily and engaged in sexually abusive behavior while he was a student in the 1980s.

The FBI was last Friday given a week to probe the accusations -- with a floor vote in the Senate pushed back accordingly -- but top lawmakers on the Senate Judiciary Committee said they now expected the investigators to report back as early as Wednesday.

Trump stirred the furious backlash when, at a Mississippi election rally late Tuesday, he ridiculed Blasey Ford's claim that Kavanaugh drunkenly tried to rape her in 1982, when both attended elite private high schools in suburban Washington.

The White House denied that Trump had derided the university professor.

"The president was simply stating facts that Dr Ford herself laid out in her testimony," spokeswoman Sarah Sanders told journalists.

"Excuse me, she's been treated like a Faberge egg by all of us, beginning with me and the president," Conway said of Blasey Ford.

In searing testimony before the Senate Judiciary Committee last week, Blasey Ford told lawmakers she recalled some important details of the incident at a party in a private home, and was absolutely certain that Kavanaugh was the attacker.

She could not remember other aspects however -- prompting Trump to mock her before an auditorium of supporters.

"I had one beer, right?" Trump said, echoing one point Blasey Ford did recall.

"But I had one beer. That's the only thing I remember." Trump said.

Michael Bromwich, one of Blasey Ford's attorneys, slammed "a vicious, vile and soulless attack" on his client.

"Is it any wonder that she was terrified to come forward, and that other sexual assault survivors are as well? She is a remarkable profile in courage. He is a profile in cowardice."

It was not clear whether the remarks shifted the dynamic in the battle over Kavanaugh, whose appointment Republicans hope could shift the balance in the Supreme Court decisively to conservatives.

Democrats say Kavanaugh cannot be confirmed with the still-unproven accusations hanging over his head. Kavanaugh steadfastly denies the allegations.

With Republicans holding a slim 51-49 majority in the Senate, the loss of any two of their senators would doom Kavanaugh.

None of the three undecided Republicans would say if their views had solidified, one way or another.

Flake said Trump's comments would not affect his view of the nominee.

"I am taking everything into account," Murkowski told reporters when asked about the importance of Trump's remarks.

Media reports Wednesday said the FBI was under constraints from the White House on how far it could go in interviewing witnesses.

Sanders insisted Trump had given the investigators as much rein as needed, but added that it was the Senate which dictates the scope of the probe.

"It's time to put this embarrassing spectacle behind us," he said, calling the criticism of Kavanaugh "a feeding frenzy."