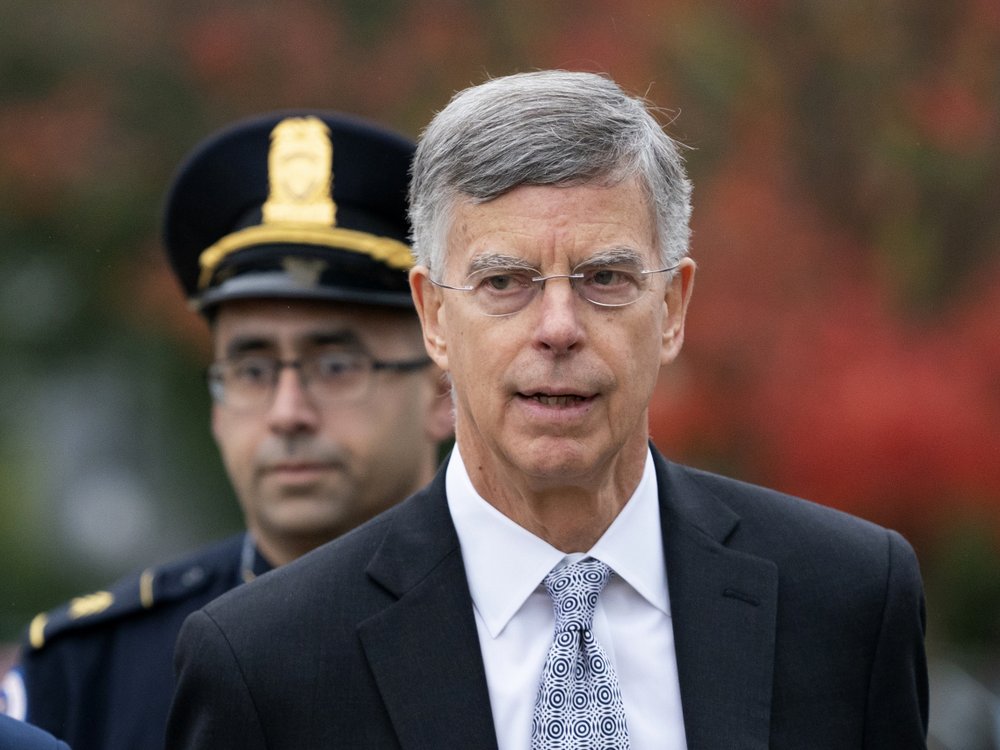 Ambassador William Taylor is escorted by US Capitol Police as he arrives to testify before House committees as part of the Democrats' impeachment investigation of President Donald Trump, at the Capitol in Washington, Tuesday, Oct. 22, 2019. (Photo: AP)

Maybe it was a quid pro quo after all.

A top US diplomat told House impeachment investigators that President Donald Trump was withholding military aid to Ukraine unless the country’s president went public with a promise to investigate Democrats.

William Taylor’s 15-page opening statement — delivered Tuesday as part of a closed-door deposition — is now central to the impeachment inquiry. It contradicts Trump’s repeated denials, and details what Taylor says was a pressure campaign against Ukrainian President Volodymyr Zelenskiy to investigate Democrats and a company linked to the family of Trump’s potential 2020 Democratic rival Joe Biden.

Democrats said that they were shocked and disturbed by what they heard.

A look at the key takeaways from Taylor’s statement:

In his statement, Taylor recounts conversations with other officials in the Trump administration, including Ambassador Gordon Sondland.

While Sondland told lawmakers he had spoken with Trump before reassuring Taylor on Sept. 1 that there was no quid pro quo with Ukraine, Taylor remembers the call with Sondland differently.

“During that phone call, Ambassador Sondland told me that President Trump had told him that he wants President Zelenskiy to state publicly that Ukraine will investigate Burisma and alleged Ukrainian interference in the 2016 US election,” Taylor said in the statement. Biden’s son, Hunter, served as a board member of Burisma Holdings.

Crucially, according to Taylor, Sondland said “everything” Ukraine wanted was contingent upon Ukraine opening an investigation, including the military assistance approved by Congress that Trump was holding back.

KEPT IN THE DARK

Taylor testified he took over the embassy in Ukraine earlier this year, after the ousting of former Ambassador Maria Yovanovitch. He spoke with her about the job offer, and she urged him to go, “both for policy reasons and for the morale of the embassy.” (Yovanovitch testified to impeachment investigators earlier this month that Trump had her removed from Ukraine.)

But he felt increasingly in the dark, as did others, about what was really happening with Ukraine policy. He was even kept in the dark about Trump’s call on July 25 with Zelenskiy.

“Strangely,” Taylor said, “even though I was Chief of Mission and was scheduled to meet with President Zelenskiy along with Ambassador Volker the following day,” he received no readout of the call from the White House. “The Ukrainian government issued a short, cryptic summary.”

Taylor detailed an unusual arrangement for US policymaking involving Ukraine — an official channel through the State Department and a “highly irregular” channel.

That irregular channel, Taylor told lawmakers, involved Rudy Giuliani, the president’s personal lawyer; Sondland; US special representative for Ukraine Kurt Volker; and Energy Secretary Rick Perry. The group was so well-connected in Washington that they could operate outside of the official State Department channels, he said. And they did.

Members of the group also took strides to avoid having their conversations documented, Taylor said.

In one instance, Sondland told Taylor that he didn’t want some US officials to listen in to a call in June. The next day, when the call was to take place, Sondland said he wanted to “make sure no one was transcribing or monitoring” as Zelenskiy joined the call, Taylor said.

Taylor also said that by mid-July it was clear that any meeting between Trump and Zelenskiy would have to come after Zelenskiy agreed to investigate Burisma Holdings.

“It was also clear that this condition was driven by the irregular policy channel I had come to understand was guided by Mr. Giuliani,” Taylor said.

Taylor said he first learned aid was being held from Ukraine on July 18, during a video conference, from a staff member at the Office of Management and Budget.

“In an instant, I realized that one of the key pillars of our strong support for Ukraine was threatened,” he said.

The State Department, the Defense Department, the Central Intelligence Agency and the National Security Adviser all thought the president should reverse course, Taylor said. They tried to get a meeting but it never happened, he told lawmakers.

Taylor described an urgent need for military aid. He and Volker went to the front lines in northern Ukraine shortly after the July 25 call, where Russian-backed forces were fighting, to get a briefing from the commander of forces there. The commander there thanked them for the security assistance. “But I was aware that this assistance was on hold, which made me uncomfortable,” he said. He noted more than 13,000 Ukrainians had been killed. And more “undoubtedly” would die without US assistance.

When Vice President Mike Pence met with Zelenskiy on Sept. 1, Zelenskiy asked almost immediately about the security aid, Taylor said he was told.

In subsequent meetings, Taylor said Sondland told him that the restoration of aid to Ukraine was dependent on Zelenskiy making a public statement that he would investigate the Bidens.

Taylor told lawmakers that Sondland tried, at one point, to explain the dealings with Ukraine by stating that “President Trump is a businessman.” ″When a businessman is about to sign a check to someone who owes him something, the businessman asks that person to pay up before signing the check,” he recalls Sondland saying.

Volker used the same terms later. Taylor said that he argued to both the explanation made no sense, because Ukraine owed Trump nothing.

“And holding up security assistance for domestic political gain was ‘crazy’ as I had said in my text message,” he said, referring to a text released by House Democrats.