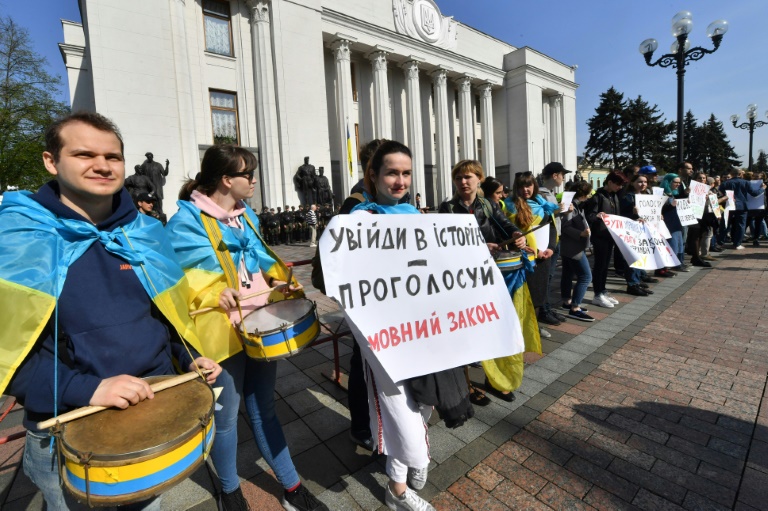 An activist holds a placard reading "Become part of the history - vote for the language law" during a rally in front of the Ukrainian parliament in Kiev on April 25, 2019. (Photo: AFP)

Ukraine's parliament on Thursday passed a law enforcing the use of the Ukrainian language in official settings, a move likely to rile Russian-speaking areas of the country and Moscow.

Officials at all levels as well as doctors, teachers, lawyers and others, will have to speak Ukrainian or face fines. The law will not apply to private communications or religious rites, media reported.

The law will not be enforced for three years as centres are set up around the country to support the learning of Ukrainian language and culture, MP Nikolai Knyazhitsky told the Interfax-Ukraine news agency.

Outgoing President Petro Poroshenko on Twitter called the vote a "historic event", comparing it to the regeneration of the army and the creation of a unified Ukrainian Orthodox church during his term in office.

President-elect Zelensky, a comedian who has played the role of president in a Russian-language drama but until now has had no political experience, often speaks in Russian.

The law makes "public humiliation or neglect" of the Ukrainian language a criminal offence.

It says that every Ukrainian is obliged to speak the state language "as the language of his citizenship".

The document said that "attempts to introduce official multilingualism in Ukraine" is unconstitutional and could provoke "inter-ethnic confrontation."

Most people in the country can speak both Ukrainian and Russian, which are closely related Slavic languages, but the east and south of Ukraine are primarily Russian speaking.

Authorities in the pro-Western Lviv region last year voted to ban all Russian-language arts -- from songs to books and films -- but the measure was never implemented.

Ukraine also has sizeable ethnic Hungarian and Romanian minorities in the west of the country.

The language law has previously led to tensions between Kiev and Budapest.

The new bill was approved a day after Russia made it easier for people living in eastern Ukraine's separatist territories to obtain Russian passports, drawing swift condemnation from Kiev.

Moscow and Kiev have been at loggerheads since a popular uprising in 2014 ousted a Kremlin-backed Ukrainian leadership.

Russia then annexed the Crimean peninsula and supported rebels in a separatist conflict in Ukraine's east that has so far claimed 13,000 lives.