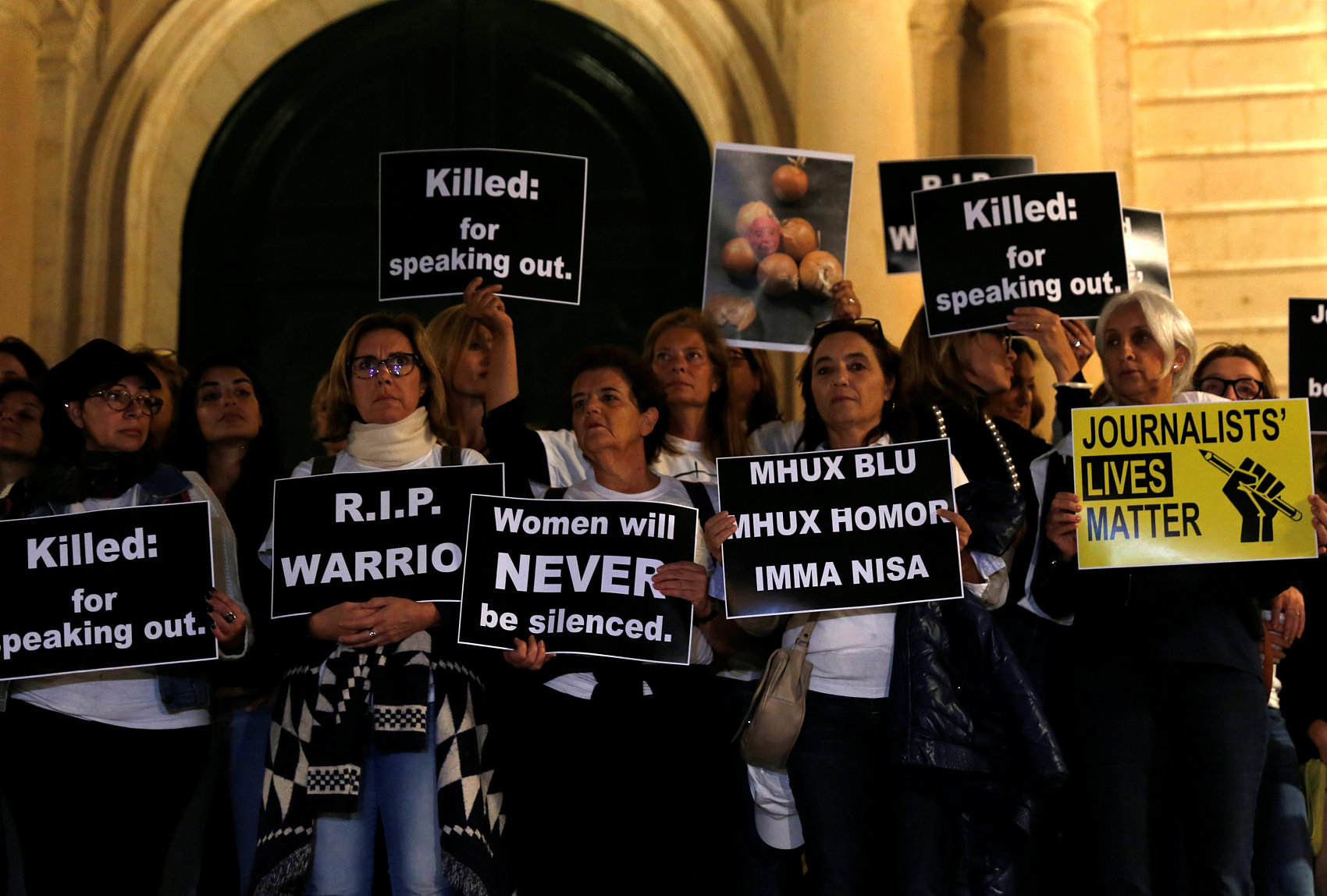 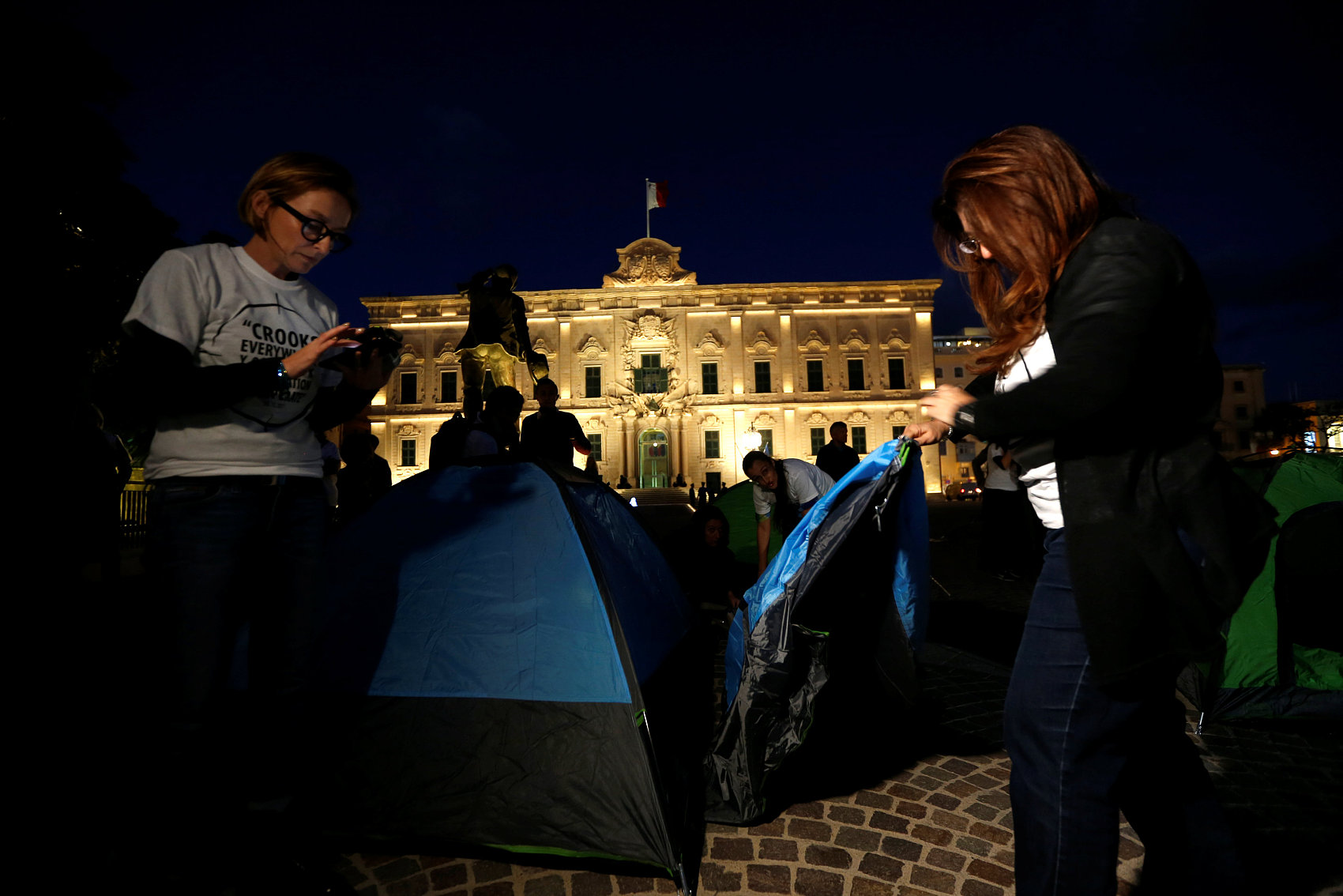 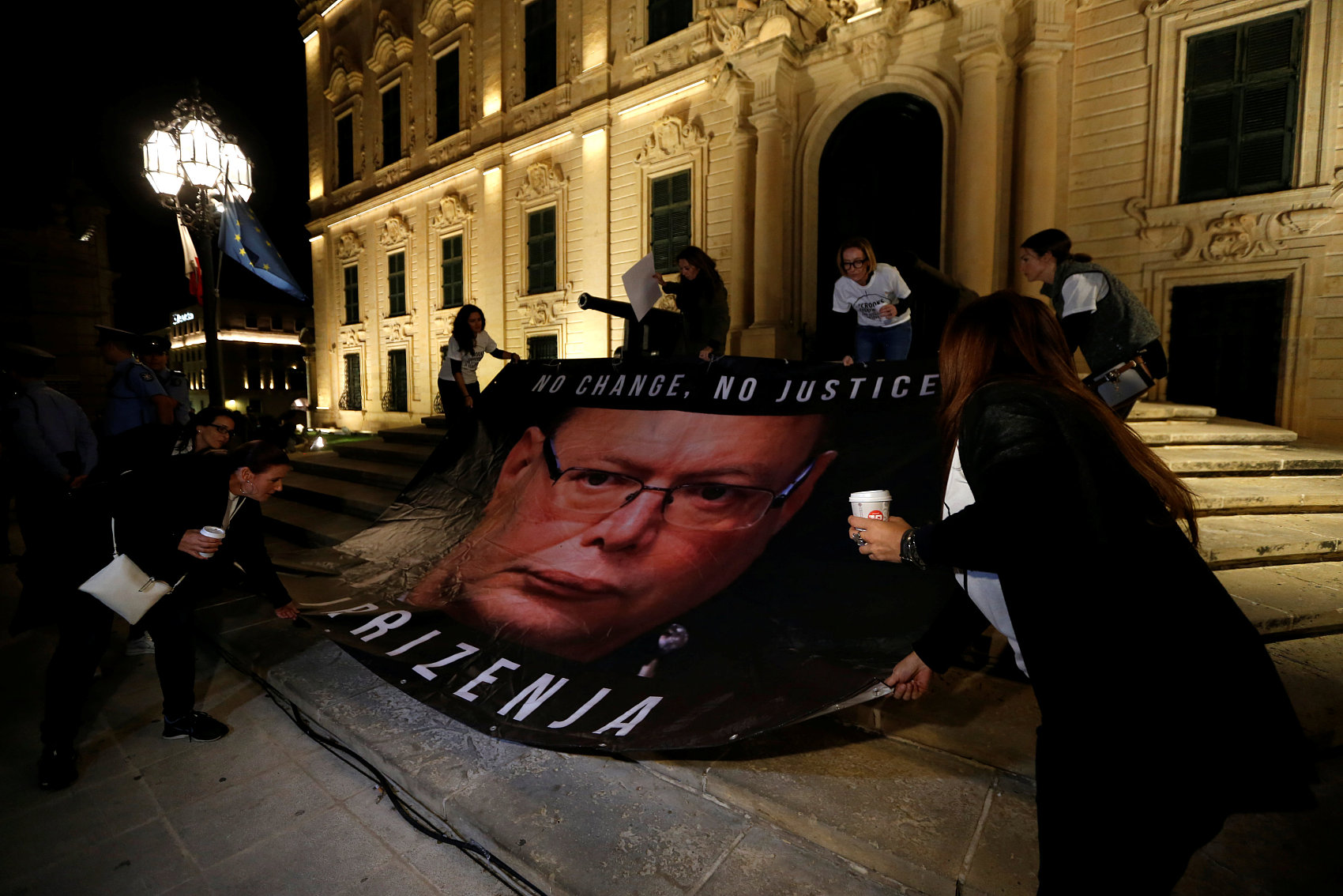 Protestors stand outside the Auberge de Castille, the office of Prime Minister Joseph Muscat, at the start of a four-day protest against the assassination of investigative journalist Daphne Caruana Galizia, who was murdered in a car bomb attack last week, in Valletta, Malta, October 26, 2017. (Photo:VCG)

A few hundred meters from the home of Maltese investigative journalist Daphne Caruana Galizia, in the field where the flaming wreckage of her car landed after being blown off the road by an assassin's bomb, a plastic pen is stuck into the ground near a Maltese flag.

A hand-written note among bunches of flowers nearby reads: "What you wrote and what you uncovered cannot be blown away."

Grief and anger are still palpable in this tiny Mediterranean nation, where Caruana Galizia's website, "Running Commentary," was essential reading in cafes, corridors of power, boardrooms and newsrooms.

"You wouldn't sleep at night if you hadn't read Daphne," said Rachel Attard, news editor at the Malta Independent, which published a twice-weekly column by Caruana Galizia.

Nearly two weeks after the journalist's brutal death, police have said almost nothing about their investigation or the prospect of identifying suspects. There have been six car bombings in Malta over the past two years, including Caruana Galizia's. None have been solved.

Caruana Galizia, 53, was educated at Catholic schools before starting work as a journalist in 1987. She cited her parents as her inspiration, saying in one of her posts that they faced challenges "with dignity, correctly and without moral compromise" from 1971-87, when Malta was ruled by the Labor Party and gripped by political turmoil.

She set up her blog in 2008 with the same absence of moral compromise. Fed by a network of sources who tipped her off about stories, Caruana Galizia turned into a headline machine that could set the nation's news agenda on any given day.

"She received so many stories from her sources, she was struggling to keep up," her son Andrew told The Associated Press at the family home.

She targeted both sides of politics with the same sense of moral outrage, accusing the country's leaders of corruption and undermining its democratic institutions.

Her sons, in a Facebook post after her Oct. 16 death, took up where she left off, calling on Maltese Prime Minister Joseph Muscat to resign "for watching over the birth of a society dominated by fear, mistrust, crime and corruption."

Caruana Galizia also followed up on the Maltese content in the Panama Papers offshore accounts leaks in 2016. She alleged earlier this year that documents provided by a whistleblower showed that the wife of Prime Minister Joseph Muscat had an offshore holding in Panama to receive money from Azerbaijan. Muscat and his wife, Michelle, denied that they had companies in Panama.

Meanwhile, opposition leader Adrian Delia sued her over stories linking him to a prostitution racket in London. He dropped the case after her death.

Despite her hard-hitting reporting, in private the journalist was gentle and reserved, said a lawyer who defended her in some libel cases.

"In person, she was very timid, docile, she was almost shy. It was the opposite of what one would think if you were to read her blogs, her posts, her articles," said Roberto Montalto.

Her life was not totally dominated by her hard-hitting investigations of corruption. She also edited a glossy, monthly lifestyle magazine called Taste&Flair, which was distributed free of charge with the Malta Independent on Sunday.

Caruana Galizia would unwind at her home, driving into the hills, along narrow country lanes lined by trees and dusty cactus plants to a house built from limestone blocks quarried in Malta that stands, shaded by trees, at the end of a long dirt track.

"She created a paradise at home for herself that was an escape from everything she saw in her journalism," said Matthew, another of her three sons and a member of The International Consortium of Investigative Journalists that won a Pulitzer Prize for its reporting on the Panama Paper revelations.

When protesters camped out outside Muscat's office in the capital, Valletta, in a show of support for the slain journalist and to call for the resignations of the country's police chief and attorney general, the sons sent them pizza and branches of bay laurel from the garden, calling them symbols of courage and strength.

But even in her beloved garden, Caruana Galizia never sat still. Shortly before her death, she had bought saplings of native trees to plant and was considering building a chicken coop.

Her supporters in Malta are now hoping the outrage generated by Caruana Galizia's killing will spark change that could help this nation shrug off its reputation as a haven for money laundering and corruption.

Greta Muscat Azzopardi, a 34-year-old project manager who was among those camping outside the prime minister's office, said the journalist was an inspiration.

"I haven't always agreed with what she posted, but I really believe we need to be OK with criticizing each other in public," she said. "A lot of things get hidden because we are so afraid to criticize and challenge and question."