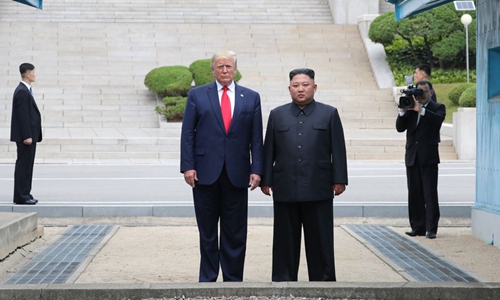 US President Donald Trump meets with Kim Jong-un, top leader of the Democratic People's Republic of Korea, in the inter-Korean border village of Panmunjom on June 30, 2019. (Photo: Xinhua)

North Korea promised an ominous "Christmas gift" earlier this month if Washington does not give ground by the end of December. The denuclearization process has been largely deadlocked since the collapse of a summit in Hanoi, Vietnam at the start of the year.

Pyongyang has carried out a series of static tests at its Sohae rocket facility this month, after a number of weapons launches in recent weeks - some of them described as ballistic missiles by Japan and others. North ­Korea is banned from carrying out such tests under UN sanctions.

Kim held an enlarged meeting of the Workers' Party's Central Military Commission, for which he serves as chairman.

There, he "gave analysis and briefing on the complicated internal and external situation... to bolster up the overall armed forces of the country," the official KCNA news agency reported.

"The Supreme Leader indicated in detail the direction and ways to be maintained" to boost the armed forces, KCNA said.

"Important issues for decisive improvement of the overall national defense and core matters for the sustained and accelerated development of military capability for self-defense" were also discussed, it added.