Kim in Beijing for 4-day visit 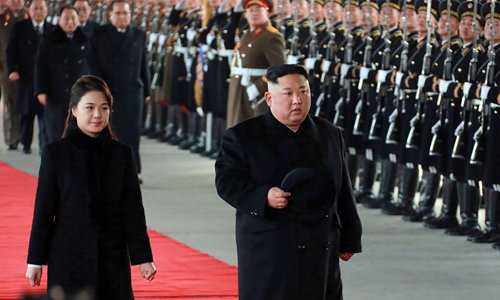 North Korean leader Kim Jong-un arrived in Beijing seeking a breakthrough in denuclearization talks and ways to improve ties with the US.

If North Korea reaches positive and historic results in the negotiations with the US, Chinese analysts noted that 2019 could be as seminal a year for North Korea as 1979 was for China, drawing a parallel to the year China and the US established formal diplomatic ties and China began its reform and opening-up.

At the invitation of Xi Jinping, general secretary of the Central Committee of the Communist Party of China (CPC) and Chinese president, Kim, chairman of the Workers' Party of Korea and chairman of the State Affairs Commission of North Korea, is visiting China, the Xinhua News Agency reported on Tuesday.

Kim is set to visit China Monday to Thursday, said a spokesperson of the International Department of the CPC Central Committee in Beijing.

Kim's visit is taking place as North Korea and the US are reportedly planning a second leaders' summit, prompting some Chinese media and observers to speculate that Kim wants to consult with China about the Trump meeting.

Discussions on "major issues of political security, economic development and strategy" have become a tradition of China-North Korea relations at the beginning of a new year, Wang Junsheng, a research fellow on East Asian Studies at the Chinese Academy of Social Sciences, told the Global Times on Tuesday.

Visiting China before a meeting with Trump seems like a new tradition in the China-North Korea relationship, Zheng Jiyong, director of the Center for Korean Studies at Fudan University in Shanghai, told the Global Times on Tuesday.

Kim visited China three times in March, May and June 2018. The March and May visits came before his historic meeting with Trump.

Wang Sheng, a professor of international relations at Jilin University, believes the reason North Korea could take a daring step toward denuclearization and engagement with the US in 2018 was "mainly because of its trust in China."

Although both sides are planning a second summit, the situation is not entirely optimistic.

Kim said in his New Year address on January 1 that if the US "does not keep the promise it made in the eyes of the world…we may be compelled to find a new way for defending the sovereignty of the country," according to the Korean Central News Agency.

The US attitude toward sanctions and denuclearization appears unchanged and this has caused a deadlock, analysts noted.

"With North Korea and the US in a deadlock, China's role will be extremely important," Zheng said.

"Xi and Trump praised each other on efforts to solve the peninsular issue at the G20 in Argentina, and after the meeting with Trump in December, Xi invited Kim to Beijing in January, which shows that China is making a substantial contribution to the denuclearization of the peninsula," he said.

As the timing of Kim's visit overlaps with the vice-ministerial trade talks between China and the US, and a US warship sailing off the Xisha Islands in the South China Sea on Monday, some observers and media concluded that China was using the Korean Peninsula issue to strengthen its hand at the negotiating table with the US.

But Chinese Foreign Ministry spokesperson Lu Kang said at Tuesday's routine press conference that the overlap was just a coincidence.

China's stances, whether on the trade friction with the US or developing ties with North Korea, are clear, consistent, open and transparent, Lu said.

"So I don't think we need to play some tricks or techniques to let the US receive our messages. The US is pretty clear about China's stance," Lu said at the press conference.

Asked if the visit was related to Kim's reported second meeting with Trump, Lu said that China would firmly support continued dialogue between North Korea and the US to achieve positive results.

Another interesting coincidence is that Kim might celebrate his 35th birthday during his trip in China. January 8, Tuesday is reportedly the birthday of Kim, though North Korea never confirmed his birth date.

"In 2018, the two sides had exchanges and communication in many fields including the arts, sports and culture," Wang said.

Against the background of US sanctions, economic development is a top priority for Kim, Zheng noted.

Kim is planning a new era after his second summit with Trump, which might open his country to massive development opportunities, Wang Junsheng said.

Kim said in his address that "All sectors and all units should fulfill their quotas of the national economic plan in all its indices by identifying and enlisting every last reserve, possibility and potential and by increasing production and practising economy."

Zheng said that "Kim wants to gain from Chinese experiences on economic development and improving the livelihood of ordinary people."