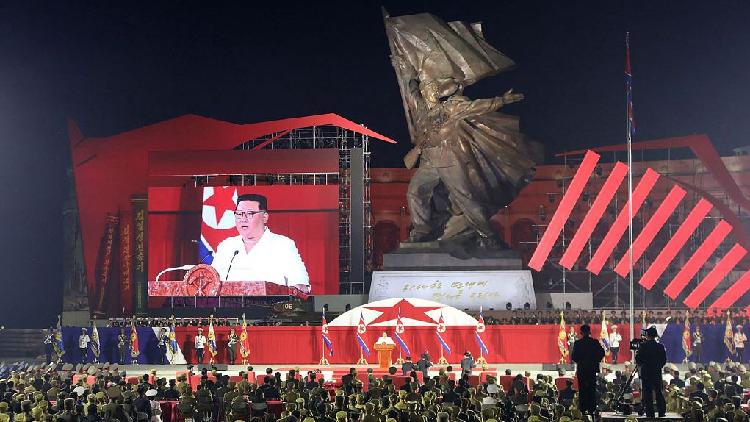 This picture taken on July 27, 2022 and released by the DPRK's official Korean Central News Agency on July 28 shows DPRK top leader Kim Jong Un (C) delivering a speech at the 69th anniversary of the victory in the Korean War in Pyongyang, DPRK. /CFP

Kim Jong Un, top leader of the Democratic People's Republic of Korea (DPRK), has said his country is ready to mobilize its nuclear war deterrent and counter any U.S. military provocation, state media reported on Thursday.

Kim made the remarks during a speech at an event to mark the 69th anniversary of the July 27 Korean War armistice, which left the two Koreas – the DPRK and the Republic of Korea (ROK) – technically still at war, according to the official Korean Central News Agency.

"Our armed forces are thoroughly prepared to respond to any crisis, and our nation's nuclear war deterrence is also fully ready to mobilize its absolute strength faithfully, accurately and promptly to its mission," he said.

Kim also warned against any preemptive strikes by the new ROK administration.

His latest warnings come as the ROK and the United States move to ramp up joint military exercises, which have always infuriated the DPRK as Pyongyang considers them rehearsals for invasion.

This week, the U.S. military held live-fire drills using its advanced Apache helicopters stationed in the ROK for the first time since 2019.