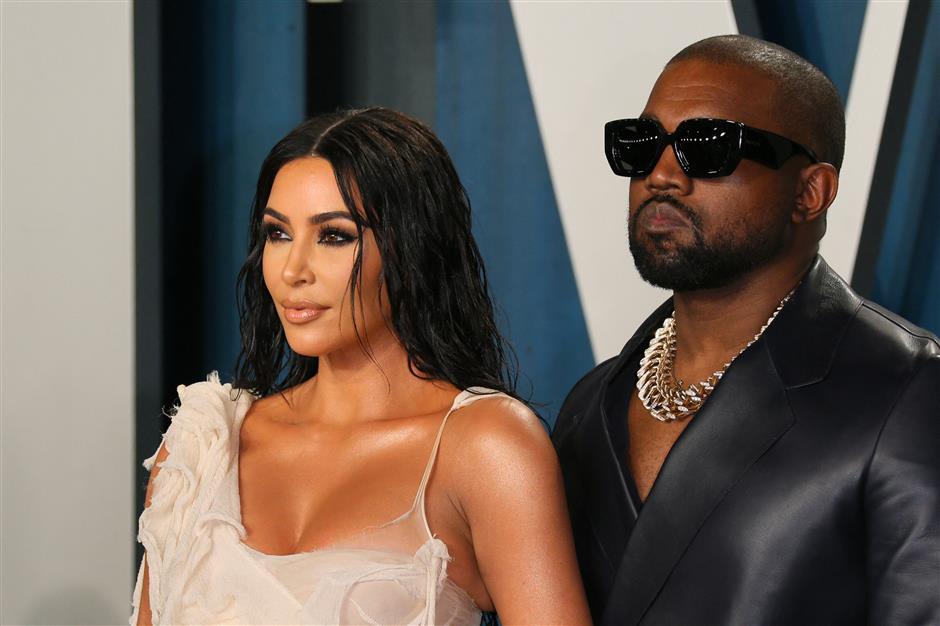 In this file photo US media personality Kim Kardashian (left) and husband US rapper Kanye West attend the 2020 Vanity Fair Oscar Party following the 92nd Oscars at The Wallis Annenberg Center for the Performing Arts in Beverly Hills on February 9, 2020.

The mega-celebrity couple's divorce proceedings come just weeks after US media reported the pair were living separately and going through counseling dealing with "regular relationship issues."

Celebrity gossip site TMZ — which broke the news on Friday — said the separation was "as amicable as a divorce can be."

Kardashian, 40, is asking for joint custody of the couple's four children, it added, with her lawyer Laura Wasser reportedly handing in the divorce papers on Friday.

Kardashian's publicist confirmed the divorce filing but did not provide further details.

The pair, who began dating in 2012 and married in a lavish ceremony in Italy two years later, rapidly became one of the world's most instantly recognizable couples.

But their union has been dogged for months by reports in the gossip press that their marriage was on the rocks as West has battled with mental health issues and launched an improbable and controversial foray into US politics.

West, 43, has opened up about his struggles with bipolar disorder.

In July last year the mercurial entertainment mogul launched a bid for the US presidency with a rambling speech during which he revealed he had wanted to abort his daughter, and broke down in tears.

He also posted a series of tweets, later deleted, that accused his wife and mother-in-law of trying to lock him up, and suggested he was seeking a divorce.

Kardashian called on the media and public to show "compassion and empathy" following her husband's erratic behavior.

"Those that understand mental illness or even compulsive behavior know that the family is powerless unless the member is a minor," Kardashian said in her lengthy Instagram post in July.

Aside from family visits, West has been living at his sprawling ranch in Wyoming in recent months, while Kardashian and the children stayed in California.

It would be the first divorce for West and the third for Kardashian, who came to fame with the US reality TV series "Keeping Up with the Kardashians" which followed the lives of her family members in Los Angeles.

Chicago-raised rapper and record producer West has won 21 Grammys. He burst onto the rap scene on his production chops, before delivering a string of critically acclaimed studio albums, selling over 20 million copies.