North Korean leader Kim Jong-un and US President Donald Trump signed an agreement after their historic summit on Tuesday in Singapore under the gaze of the world, committing to "new" diplomatic relations. 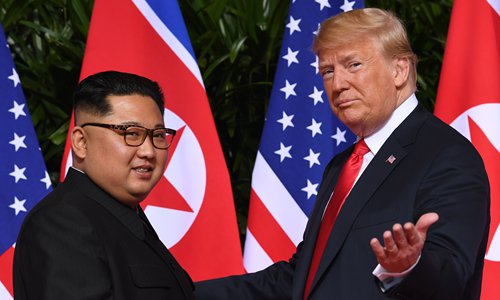 US President Donald Trump (right) gestures as he meets with North Korean leader Kim Jong-un at the start of their historic US-North Korea summit, at the Capella Hotel on Sentosa island in Singapore on Tuesday. Trump and Kim became the first sitting US president and North Korean leaders to meet, shake hands and negotiate an end to a decades-old nuclear standoff. (Photo: AFP)

The other two articles of the agreement were North Korea's commitment to work toward complete denuclearization, and the recovery of the remains of prisoners of war and soldiers who went missing during the 1950-53 Korean War.

Trump declared his summit with Kim a "success" during a press conference Tuesday afternoon. He told reporters that "my meeting with Chairman Kim was honest, direct and productive… We are prepared to start a new history… and write a new chapter between our nations."

The Chinese Foreign Ministry released a statement on Tuesday, saying that "China appreciated the political decisions made by the leaders of US and DPRK, welcomed and supported the achievements of the summit, and praised the efforts made by all relevant parties to promote the summit."

China insists on denuclearizing the Korean Peninsula, firmly safeguarding the peace and stability of the peninsula and making constant efforts to deal with problems through negotiations, the statement said.

The changes on the Korean Peninsula, especially achievements from the summit, fit China's expectations. China hopes and will support the two sides to further carry out ensuing negotiations and the consensus reached in the summit in an effort to make the peaceful process irreversible, read the statement.

South Korean President Moon Jae-inhailed the outcome of the summit on Tuesday, calling it a historic event that will end what he called the last remaining conflict of the Cold War and write a new history of peace and cooperation on the Korean Peninsula, Yonhap News Agency reported.

Sanctions on North Korea should be adjusted depending on the situation and to the extent North Korea has fulfilled the UN resolutions. China has always insisted that sanctions are not the purpose, and that the UN Security Council's moves should help the Korean Peninsula peace process, Geng said.

Lü Chao, an expert on Korean studies at the Liaoning Academy of Social Sciences, told the Global Times on Tuesday that China has always been a participant in the process.

"China's role is that of an intermediary, a coordinator, a supervisor, and a conciliator. If North Korea resumes nuclear or ballistic missile tests, China will stand up against it. But if the US again threatens the security of North Korea, China will be against it, too," Lü said. "This is fair."

Foreign media has wrongly interpreted China's role, saying China has been marginalized. This is not consistent with the facts, Lü said. He added that China and North Korea are friendly neighbors.

As to when China thinks the treaty on ending the state of war on the Korean Peninsula should be prepared, Geng said the settlement of Korean Peninsula issues is consistent with China's dual suspension proposal.

As an important concerned party and signatory of the Korean War armistice, China has the responsibility and obligation to play an active role in promoting a peace treaty for the Korean Peninsula, Geng said.

The two Koreas technically remain at war as the 1950-53 Korean War ended in an armistice. It was signed by China, North Korea and the United Nations, which was led by the US. Those signatories would need to approve a peace treaty.

Chinese experts also welcomed the Kim-Trump summit, saying that although the agreement did not cover details on denuclearization and succeeding moves, it would still serve as a start for improving US-North Korea ties.

Da Zhigang, director of the Heilongjiang Provincial Academy of Social Sciences' Institute of Northeast Asian Studies, told the Global Times that "the Kim-Trump summit has a positive effect pragmatically and historically. Relations between the US and North Korea have entered a new phase."

Lü said he was impressed by Kim and Trump's first meeting on Tuesday.

"Kim greeted Trump in English. The two also stayed alone together for a while after the meal… it gave us the impression that both leaders were eager to solve the Korean Peninsula issues and the confrontation between the US and North Korea. Generally, mutual trust has been strengthened," Lü said.

Da said the agreement did not include the phrase, "a complete, verifiable and irreversible denuclearization," which the US wanted to include. But this is to be expected. The commitment to US-North Korea relations is only a start and there are many possibilities in the future.

Trump said during the Tuesday press conference that the two sides "are starting the process of denuclearization very quickly."

Trump said that he had invited Kim to visit the White House at "the appropriate time" and that Kim had accepted his invitation.

The two leaders also agreed to have follow-up negotiations led by US Secretary of State Mike Pompeo and a senior North Korean official.