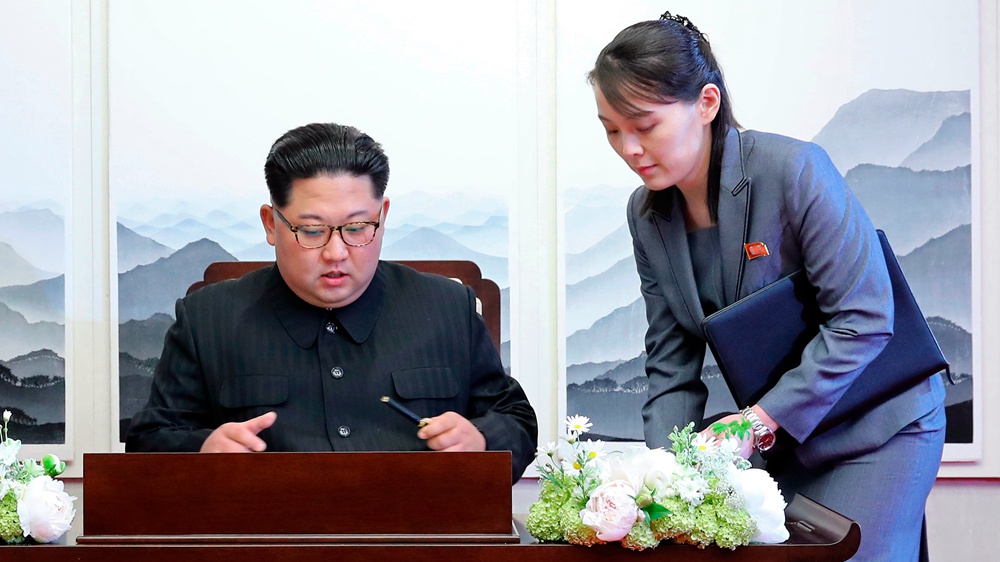 Kim Yo Jong (R) stands next to her elder brother, DPRK leader Kim Jong Un, during an inter-Korean summit in the border village of Panmunjom, April 27, 2018. (Photo: AP)

"I feel it is high time to surely break with the South Korean (ROK) authorities. We will soon take a next action," Kim Yo Jong, first vice department director of the Central Committee of the Workers' Party of Korea, said in a statement carried by the DPRK's official Korean Central News Agency (KCNA).

"By exercising my power authorized by the Supreme Leader, our Party and the state, I gave an instruction to the arms of the department in charge of the affairs with enemy to decisively carry out the next action," she said.

"The right to taking the next action against the enemy will be entrusted to the General Staff of our army," she added.

Kim Yo Jong's threats came amid renewed tension on the Korean Peninsula as Pyongyang blames Seoul for failing to stop anti-DPRK leaflets from being sent into the North.

Jang Kum Chol, director of the United Front Department of the Central Committee of the Workers' Party of Korea, on Friday dismissed Seoul's promise to stop "defectors" from sending balloons carrying leaflets as "lip service" and warned that the DPRK will take "regretful and painful" retaliation soon against the ROK.

The ROK's Unification Ministry called for the DPRK's compliance with the agreements signed between the two sides. The Defense Ministry said the ROK is closely watching the DPRK's military moves and will maintain a "staunch posture against all situations."

Pyongyang announced on Tuesday to cut off all inter-Korean communication lines. The joint liaison office set up in 2018 was shut down by the DPRK a few days earlier.

Relations between Pyongyang and Seoul warmed up in 2018 with three summits between DPRK leader Kim Jong Un and ROK President Moon Jae-in. The two sides signed the Panmunjom Declaration, which called for complete denuclearization of the peninsula and improving inter-Korean ties.

However, inter-Korean cooperation has stalled since the second summit between the DPRK leader and U.S. President Donald Trump in Vietnam's Hanoi last year collapsed over differences on denuclearization and sanctions relief.

A senior DPRK diplomat on Saturday urged the ROK to stop "nonsensical" talk about denuclearization, saying Seoul is not qualified to discuss or "poke their noses into" nuclear talks between Pyongyang and Washington.

On the other hand, Pyongyang also urged Washington to "keep its mouth shut" on inter-Korean affairs.