For the first time in history, leaders of Japan and South Korea joined the NATO Summit in Madrid on Wednesday to express their interest in underpinning a security alliance with the US' Western allies, following an "unprecedented" tough stance against China in a joint statement released after the G7 leaders' meeting wrapped up in Germany on Tuesday. 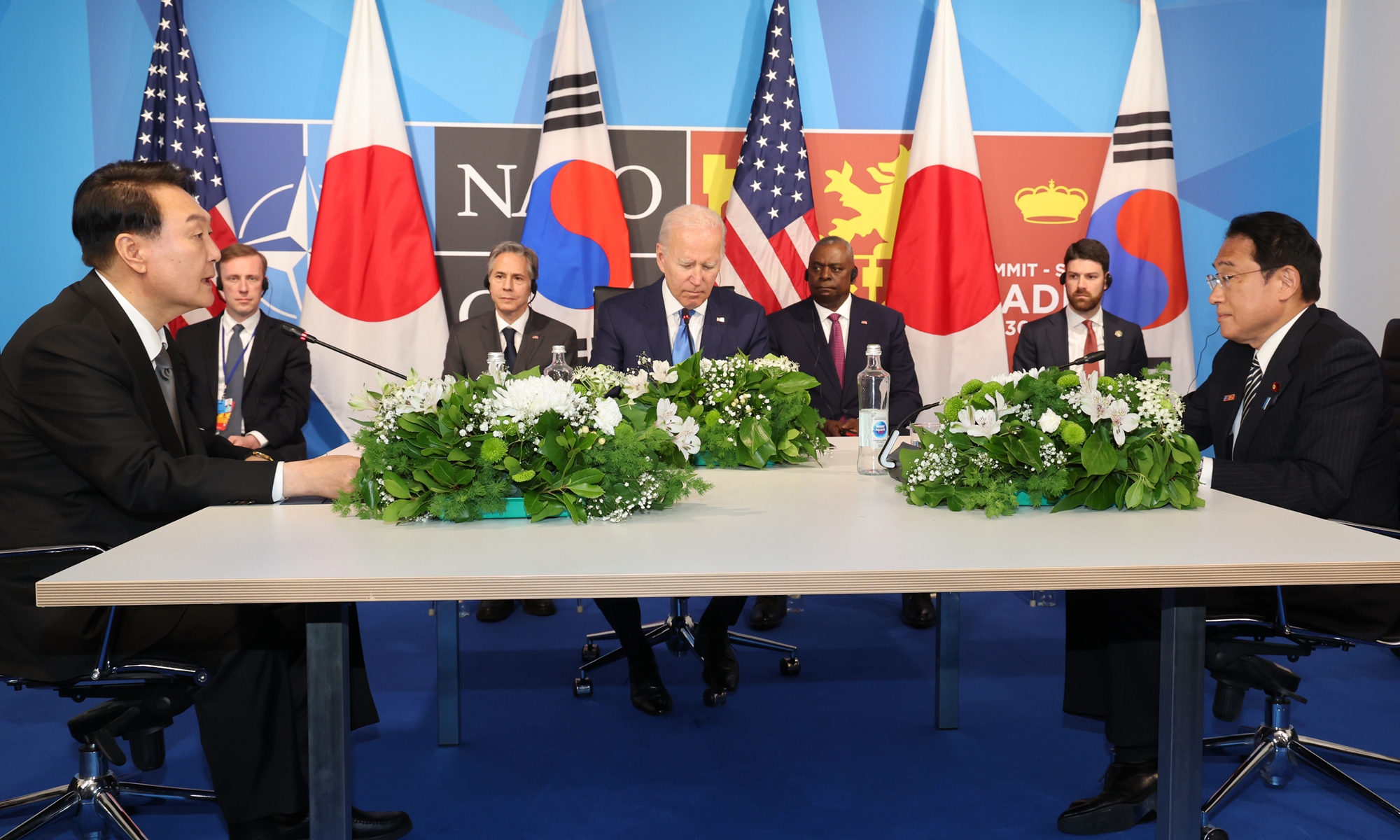 On Wednesday, NATO members approved a "new Strategic Concept for the Alliance," setting out the priorities, core tasks and approaches for the next decade. NATO official website said that the document defines Russia as the "most significant and direct threat" to Allies' security, while addressing China for the first time and the challenges that Beijing poses toward Allies' security, interests and values.

China is closely paying attention to the three-way summit between US, Japan and South Korea on the sidelines of the summit, in which the Korean Peninsula issue will be discussed along with NATO's Asia expansion against China.

As for China's two neighbor, Chinese experts warned that guiding the way for the US-led NATO into Asia-Pacific at the expense of diminished diplomatic autonomy will not serve economic and security interests in the long run, and will no doubt exacerbate regional confrontation and division.

Citing a government official, the Yonhap News Agency reported Tuesday that South Korean President Yoon Suk-yeol will pledge to start a new cooperation program with NATO in the second half of 2022 and will set up a mission to NATO in Brussels.

Japanese Prime Minister Fumio Kishida said on Sunday at the G7 Summit that the group should form a united front to prevent other countries "drawing the wrong lessons," from the Ukraine crisis, a veiled shot at China, the Japan Times reported.

Similar to the G7 leaders' meeting, the NATO Summit was described by some Western media as an occasion to embrace confrontation with China, after NATO Secretary General Jens Stoltenberg recently said the summit would directly address China for the first time, not just Russia. Earlier this month, US national security advisor Jake Sullivan said China "will feature in the communiqué in a more robust way than we've ever seen before," the Guardian reported.

Prior to the NATO Summit, China was already high on the agenda of the G7 meeting. In the joint statement released on Tuesday, China was addressed 14 times in this year's communiqué compared to four mentions in the 2021 edition. The joint statement hyped China's internal affairs like Xinjiang, Hong Kong, as well as the Taiwan question, groundlessly criticizing China for alleged "economic coercion" and "forced labor."

Chinese Foreign Ministry spokesperson Zhao Lijian said at a Wednesday press briefing that the G7, accounting for only 1/10 of the world population, is not qualified to represent the world, and not eligible to take their values and standards as universal ones.

The G7 used its post-summit communiqué to advocate "democracy against authoritarianism," grossly interfered in China's internal affairs, attacked and discredited China and incited confrontation, Zhao said. "This fully shows that the G7 has no intention of conducting dialogue and cooperation on the basis of equality and respect. Instead, it adheres to the Cold War mentality, adheres to ideological prejudice and pursues bloc politics based on the interests of small groups."

The G7 members have benefited the most from globalization and are supposed to promote globalization and world economic growth… However, at a critical time for the international community to fight COVID-19 and recover, the G7, instead of seeking unity and cooperation, is keen on creating division and confrontation, without any sense of responsibility or morality, Zhao noted.

The G7 summit opened Sunday in Schloss Elmau amid protests as hundreds of people took to the streets in the southern German town, the Xinhua News Agency reported.

In Madrid, thousands of demonstrators rallied on Sunday to call for peace and protest against a NATO summit to be held this week, Xinhua said.

Wang Yiwei, director of the Institute of International Affairs at the Renmin University of China, told the Global Times on Wednesday that as some Europe countries are gradually adopting a mindset of confrontation, the so-called unity within allies is offensive and aggressive to others.

China should be on guard against the trend of the US and its allies to hype the "China threat" theory, as well as Washington's new plan, Wang said.

The US is turning globalization into a bloc-oriented globalization, Wang said. He explained that in the economy and supply chains, the US emphasizes so-called resilience, safety, autonomy and control, and in the security sphere, security with allies to counter "China and Russia's threats" is stressed.

The Asianization of NATO is the US' way to reintegrate its alliances in Asia, which used to be a "hub-and-spoke" system centered on the US, but now it wants to strengthen intelligence and science and technology cooperation within allies, Wang said.

There is nothing new with the cliché rhetoric of the G7, behind which is the intention of escalating the situation and offering excuses for NATO's Asia expansion at the NATO Summit, Da Zhigang, director of the Institute of Northeast Asian Studies at the Heilongjiang Provincial Academy of Social Sciences, told the Global Times on Wednesday.

NATO's Asia expansion is the ultimate goal of Tokyo and Seoul, as the two are betting that after the Russia-Ukraine conflict, collective security defense would become "mainstream" under the US' peddling, Da said.

On Tuesday, Stoltenberg announced that NATO reached a deal to admit Finland and Sweden after a last-minute deal was made with NATO member Turkey to support the Nordic nations' membership, media reported.

Due to the unpleasant wartime history in the WWII, Japan actually does not much trust the US although they are allies in defense, Da said. "Therefore Japan wants to use NATO to drag its European members into the situation in northeast Asia, saving the cost and sharing the risks of a confrontation against Russia and China," Da said.

Even so, the complex interweaving of interests in international politics means that the economic and security order within the US-led bloc needs a long period of convergence and coordination, analysts said.

Japan and South Korea, in their first appearance at NATO, seemed to have lost their independence by courting the Americans too much, and only they themselves know whether the two Asian heads of state are getting enough respect after flying long hours to boost support for US President Joe Biden, a Beijing-based expert told the Global Times on condition of anonymity.

In one of the group photos of the G7 leaders circulating online, the Japanese Prime Minister was blocked by British Prime Minister Boris Johnson, which caused strong dissatisfaction among Japanese net users.

In a video clip posted by Korea Herald reporter Yim Hyun-su on Twitter with the words: "When someone you think is your bestie doesn't acknowledge you at a party," South Korean leader Yoon, smiling and nodding his head, was given a "no look handshake" by Biden. Yim's video is trending in South Korea and some described it as "pathetic."

Describing NATO's possible Asia expansion as "setting the wolf the keep the sheep," the expert said participation in US-led organizations is more about serving the interests of Washington, which has long been advocating "America first."

Japan and the South Korea should stick to the bottom line when it comes to their China policies. After all, the three nations are geographically close neighbors, but also highly complementary to each other in their economies. Following the US to contain China is clearly detrimental to Tokyo and Seoul's security and economic interests and is unwise, the expert said.