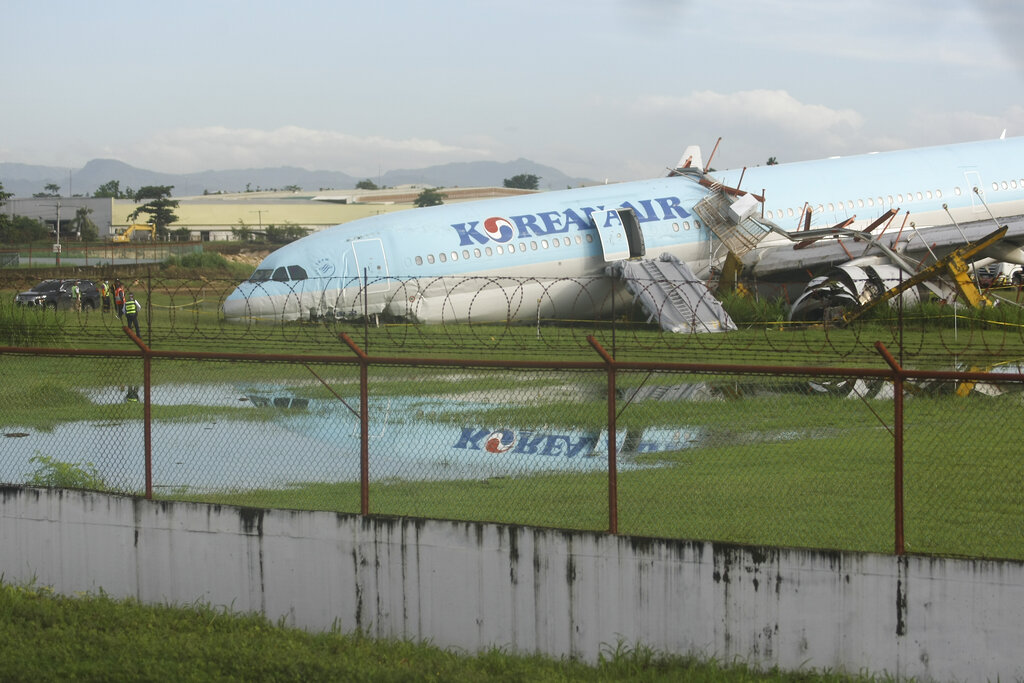 A damaged Korean Air plane remained stuck in the grass at a central Philippine airport Monday after it overshot a runway in rainy weather the night before. No injuries were reported among the 162 passengers and 11 crewmembers who escaped from the aircraft using emergency slides.

Dozens of flights have been canceled and Mactan-Cebu International Airport, one of the country's busiest, remained closed due to the stalled aircraft at the end of its lone usable runway.

The terrifying close call prompted a public apology from Korean Air's president and a vow from one of Asia's most prominent airlines to take steps to prevent a recurrence.

"We always prioritize safety in all of our operations, and we truly regret the stress and inconvenience brought to our passengers," Korean Air President Woo Keehong said in a statement.

The front underbelly of the plane was sheared off and its nose was heavily damaged. The plane lay tipped forward on a grassy area with its front landing wheel not visible and emergency slides deployed at the doors. A ripped-open hole was also visible at the top of the plane near a front door.

Philippine officials said the plane's remaining fuel would be siphoned off before efforts begin to remove the aircraft at the runway's end. Authorities were also assessing if the other aircraft that are stranded at the airport could be allowed to fly out safely.

Dozens of flights to and from Cebu province were canceled, including those of flag carrier Philippine Airlines, which initially announced more than 50 canceled domestic flights.

A Philippine investigation of the accident was underway.

The Airbus A330 flying from Incheon, South Korea, attempted to land twice before overrunning the runway on the third attempt, Korean Air Lines Co. said in a statement.

"All passengers are safe and being attended by ground personnel," the Civil Aviation Authority of the Philippines said in a statement.

In 1981, A Korean Air Lines Boeing 747 jetliner overshot the runway while taking off from Manila's international airport and skidded to a stop at the edge of a major highway. The accident injured more than a dozen of about 350 people onboard.

The plane hit a concrete fence and skidded to a halt on its belly with its front section frighteningly protruding over a busy side road of a key highway south of metropolitan Manila.