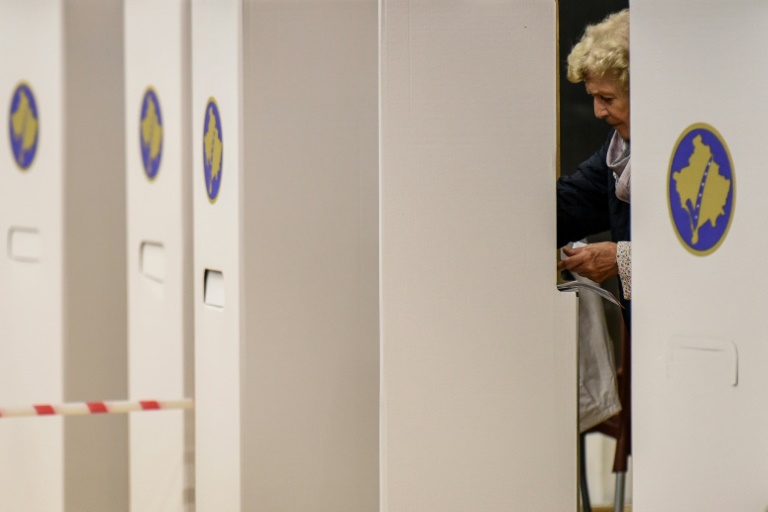 Despite diplomatic hopes for the polls, local people are far more concerned with issues like high unemployment and widespread graft.  (Photo: AFP)

Kosovo voted Sunday for new leaders who will be under pressure to tackle corruption at home and resolve lingering tensions with former war foe Serbia, a nagging source of instability in Europe.

A decade after it declared independence from Serbia, former province Kosovo is still struggling for full recognition on the world stage.

Belgrade denies its independence and Brussels has been unable to get the neighbours to make progress in talks to resolve their conflict.

The West is hoping Sunday's poll will offer a chance to re-energise the deadlocked dialogue.

"We need freedom, a state governed by the rule of law, prosperity," voter Mentor Nimani, 47, told AFP in Pristina shortly after casting his ballot.

"I would like to have more social stability, employment," and better "basic primary services like healthcare and education," added Fat Limani, a 30-something voter in the capital.

For the past decade Kosovo has been dominated by members of the guerrilla forces who waged an insurgency against Serbian repression in the late 1990s -- a war that cost 13,000 lives, mostly Kosovo Albanians.

Sunday's snap poll was called after then-Prime Minister Ramush Haradinaj, a former guerilla commander, resigned in July to face questioning by a special court in The Hague investigating war crimes from that era.

Opposition parties hope to block him and other ex-fighters from regaining power by harnessing frustration with the graft and poverty that have blighted Kosovo's first decade of independence.

Analysts say two opposition camps -- the centre-right LDK and the leftist, nationalist Vetevendosje -- have a shot at coming out on top.

But they would likely need to join forces to oust the PDK, which has been in power since 2007.

With no party expected to carve out an absolute majority, coalition talks could last for days or weeks.

At noon turnout was 19 percent, up from the 13 percent seen at that time in the last 2017 poll, according to a coalition of NGOs monitoring the poll.

Kosovo has been recognised by around 100 countries but it needs Serbia -- and its allies Russia and China -- to accept its statehood so it can get a seat in the United Nations.

Serbia is also under pressure to make peace with Kosovo in order to move forward with its EU accession process.

Yet their EU-led dialogue has been at a standstill for more than a year, with frequent diplomatic provocations, souring efforts to build goodwill.

One of the core obstacles to resuming talks is the 100-percent tariff that Haradinaj slapped on Serbian goods a year ago.

Having resisted heavy Western pressure to remove the tariff, the former commander is hoping voters will reward his tough stance with re-election.

All the other top candidates, however, have shown a willingness to reconsider the tariff for the sake of dialogue.

Kadri Veseli, leader of the PDK, which was part of the coalition with now-rival Haradinaj, has condemned the tariff move as "amateur", and said he would honour Washington's calls to remove it.

If the dialogue with Belgrade does resume, one of the most sensitive issues will be settling what powers to grant Serb-majority administrations in Kosovo.

There are approximately 40,000 Serbs living in the north and 80,000 scattered in and around a dozen enclaves in other parts of Kosovo, whose population is overwhelmingly ethnic Albanian.

Serbs have 10 reserved seats in parliament, a bloc that could be decisive in coalition-building.

The dominant Serb party is Srpska Lista, which considers itself an extension of Belgrade.

Serbian President Aleksandar Vucic has been urging Kosovo Serbs to vote for the party, leading critics to decry an atmosphere of intimidation.

For the first time Pristina has required voters there to show Kosovo documents, causing some tensions in the afternoon but no serious incidents.

Many there are also weary of the so-called "frozen conflict".

"Let them negotiate, but I don't believe in it. Nothing will come of it," Jokic Svetomir, a 70-year-old Serb in the north, told AFP.