Kurdish-led group agrees with Damascus on roadmap for ending war 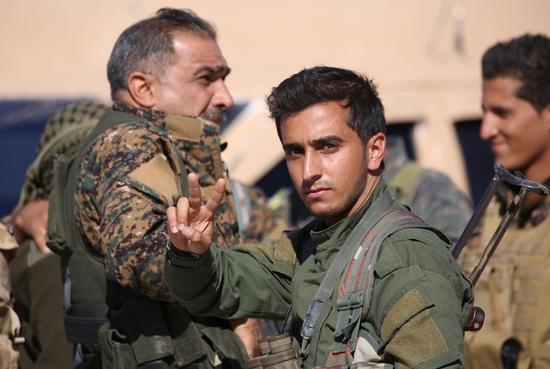 The Kurdish-led Syrian Democratic Council (SDC) announced on Saturday that it has agreed with the Syrian government on forming negotiation committees to end the current war.

In a statement, the SDC, the political wing of the US-backed Syrian Democratic Forces (SDF), declared that an agreement has been reached "to draw a roadmap that would lead to a democratic, decentralized Syria."

Such a declaration came after a delegation of the SDC arrived in Damascus on Thursday and held talks with representatives of the Syrian government, according to the pan-Arab al-Mayadeen TV.

According to the SDC statement, the meeting in Damascus aimed at laying the foundations that will pave the way for embarking on broader negotiations to resolve "lingering problems."

The meetings in Damascus had been preceded with meetings between both sides in the city of Tabqa in the countryside of Raqqa province, according to the statement.

Sihanouk Debo, advisor to the joint presidency of the Kurdish Democratic Union Party, told al-Mayadeen TV Saturday that the meeting with the Syrian government was a "first good step."

He noted that the meeting has "turned the table on all those betting on fragmented Syria."

Debo said the SDF, the armed wing of the SDC, "has always seen itself as part of the future Syrian army."

The talks marked the first public dialogue between the SDC and the Syrian government to look into the future of the Kurdish-controlled areas in northern Syria.

Meanwhile, the Qatari al-Jazeera TV on Saturday cited Riad Darar, the co-chairman of the SDC, who said that the SDF will hand over areas under its control to the Syrian army.

Darar said that the meeting in Damascus came upon the invitation of the Syrian government.

The Syrian Kurds in northern Syria seemed to be more willing to negotiate with Damascus after President Bashar al-Assad's remarks about opening door for negotiations last month.

The pro-government al-Watan newspaper said last month that the Syrian Kurds in northern Syria wanted to negotiate with Damascus without preconditions.

Mays Kreidi, the spokeswoman of the National Democratic Front, Syrian opposition group, said recently that the atmosphere is positive in the predominantly Kurdish areas in northern Syria about negotiating with Damascus, citing Kurdish figures.

Last month, Kreidi said that a delegation of her group met with Elham Ahmad, co-chair of the SDC, in the northern city of Qamishli. She added that the council agreed to send a delegation to negotiate with Damascus without preconditions.

Darar stressed that the negotiation with the Syrian government is the best way to reach results that serve Syria, according to the al-Watan newspaper.

He said that the SDF has prepared itself to fight Islamic State (IS), and the SDF is ready to be a part of the Syrian army after a settlement, adding that the SDF alliance with the foreign forces was to get rid of terrorism.

This came as the Syrian government forces have been making strides in the battles against the rebels in key Syrian areas nationwide. Assad has recently stressed the Syrian army's determination to capture all Syria areas and said that the United States must withdraw from Syria.

The SDF has spearheaded the war on the IS in the northern province of Raqqa, which was the de facto capital of the terror-designated group.

Observers believe that the positive interaction came apparently after Kurdish political groups in predominantly Kurdish areas in northern Syria sensed the risk of keeping on reliance on the United States after such dependency made them lose the Afrin enclave to the Turkish-backed rebels earlier this year.

Also, the Russians, Syrian government's main ally, have been active diplomatically to reach a formula to put the foundations for a political solution to Syria's seven-year-long war.