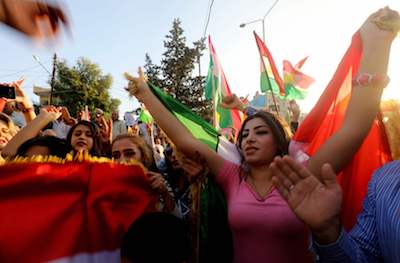 Syrian Kurds demonstrate in the northeastern Syrian city of Qamishli on October 23, 2017 against Iraqi forces operation in the multiethnic city of Kirkuk and calling upon the international community to defend Kurdish regions in Iraq. (Photo: VCG)

BAGHDAD, Oct. 24 (Xinhua) -- The parliament of the semi-autonomous region of Kurdistan in Iraq on Tuesday postponed the regional presidential and parliamentary elections for eight months, local media reported Tuesday.
The parliament also extended its own legislative term for eight months, the Kurdish media Rudaw reported.
A majority, or 60, of 68 Kurdish lawmakers attending the session voted in favor of delaying the general elections and extending the parliament term.
The postponement came after the Iraqi security forces took control of the oil-rich Kirkuk province and most of the disputed areas. It also paved the way for the electoral commission to prepare for the presidential and parliamentary elections, Rudaw said.
Major Kurdish opposition groups, including the Gorran (or Change) Movement and Kurdistan Islamic Group, did not attend the session of the 111-seat regional parliament, Rudaw added.
On Oct. 18, the Kurdish regional electoral commission halted preparation for the elections scheduled to be held on Nov. 1, due to the recent violence in Kirkuk and other disputed territories.
The elections, which were set to include the disputed areas outside the Kurdistan region, came after the Kurdish independence referendum held last month that sparked tensions between the Kurds and the central Iraqi government in Baghdad.
On Monday, Iraqi Prime Minister Haider al-Abadi, also the commander-in-chief of Iraqi forces, ordered the government forces to enter the oil-rich Kirkuk province in northern Iraq to regain control of the ethnically-mixed disputed areas.
Disagreements between Baghdad and the Kurdish regional government have been running high for years.
The ethnic Kurds consider the northern Kirkuk province and parts of Nineveh, Diyala and Salahudin provinces as disputed areas and want them to be incorporated into their region, a move fiercely opposed by the Arabs and Turkmens in the region as well as the central government.
The independence of Kurdistan is opposed not only by the Iraqi central government, but also by most of other countries as it would threaten the territorial integrity of Iraq and undermine the fight against the militant group Islamic State (IS).