WORLD Kurz favored to return as chancellor in Austria election

Kurz favored to return as chancellor in Austria election

Austrians vote Sunday in an election meant to restore political normality after a scandal that brought down ex-Chancellor Sebastian Kurz's coalition with the far-right Freedom Party in May. 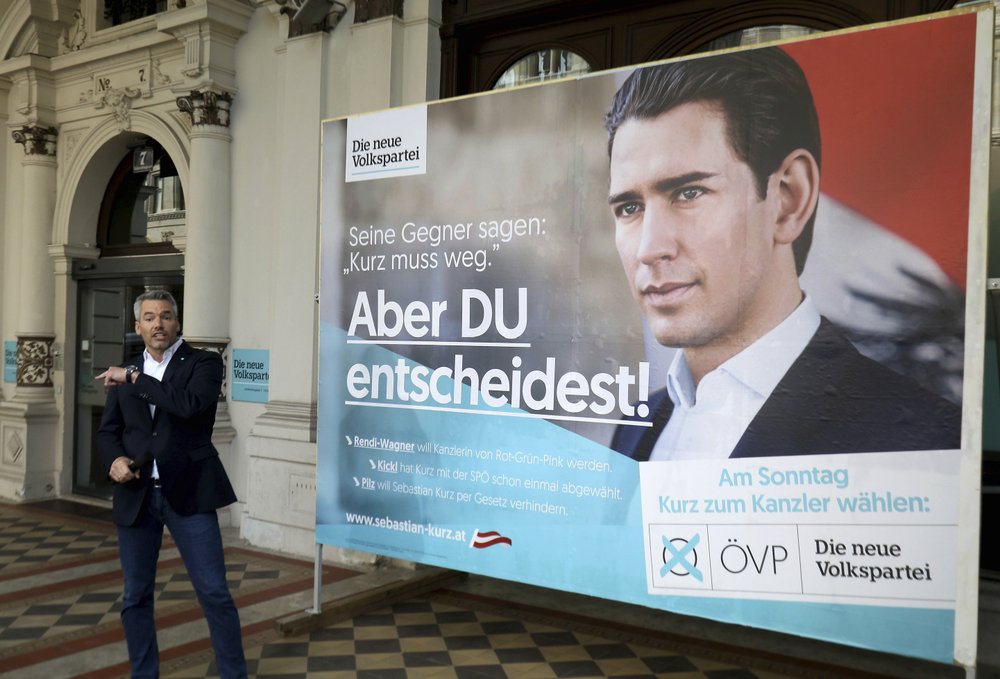 The 33-year-old conservative is strongly favored to return to power, but it is unclear whether Kurz would return to the same coalition with the nationalists whose troubles finished off his previous government or tack leftward to seek an alliance with new partners.

The country of 8.8 million people in the heart of Europe has been run by a non-partisan interim administration under Chancellor Brigitte Bierlein, a former head of its top court, since the drama in spring. The election offers a test of the far-right party's recovery from the scandal that forced out its leader of the past 14 years, Heinz-Christian Strache.

Strache resigned following the publication of a video in which he appeared to offer favors to a purported Russian investor. The video prompted Kurz to end his governing coalition, in which Strache was vice chancellor. Other parties then ganged up in parliament to remove Kurz in a no-confidence vote.

Four months later, polls show a big lead for Kurz's center-right People's Party. The Freedom Party is vying for second place with the center-left Social Democrats, which led many of post-World War II Austria's governing coalitions but are struggling under leader Pamela Rendi-Wagner.

A parliamentary majority for a realistic coalition led by anyone but Kurz appears unlikely. Though he may be able to choose between two or more potential coalitions, he could find they all have drawbacks.

Kurz, who rose to power in 2017 after focusing heavily on restricting migration, has kept his intentions vague in a campaign that has centered firmly on him personally and lacked major policy discussions. He insists that he expects a narrower outcome than polls predict and told supporters at a recent rally in Baden, near Vienna, that "being No. 1 is not enough" in this election.

"I guarantee you: when there is a majority against us then this majority will be used," he said.

That may help rally supporters, but doesn't change his position as the overwhelming favorite. The Social Democrats under Rendi-Wagner "never managed to really enter the race for the position of chancellor," said Thomas Hofer, a leading political analyst.

"If the polls are even halfway correct then there will be a big gap between first and second place, maybe even the biggest gap in the history of the republic," he said. In this campaign, "if there's an issue, then it's not really a factual matter but the question who should govern with whom."

Recent polls put support for Kurz's party at 33% or 34%, with the Social Democrats and Freedom Party at between 20% and 23% each. They show the Greens set to return to parliament with 11-13% after losing their seats in the last election two years ago, and the broadly liberal but pro-business Neos at around 8%.

Kurz's People's Party won the 2017 election with 31.5% of the vote, with the Social Democrats taking 26.9% and the Freedom Party 26%. The latter appears to have lost some voters with this year's scandal but kept a very substantial core of support.

The Freedom Party is angling to return to government with Kurz. A recent election ad even showed new leader Norbert Hofer undergoing relationship counseling with an actor portraying Kurz and declaring that "often it just takes a little shove to carry on together."

Kurz speaks well of Hofer, who is relatively moderate at least in tone. But those ambitions could be complicated by animosity between Kurz's party and Herbert Kickl, the Freedom Party's hard-line parliamentary caucus leader and Kurz's former interior minister — a favorite with grassroots members.

Kurz told ORF last weekend that "as good as the substantive work was" in the last coalition with the Freedom Party, "at the same time it was difficult with rat poems and other individual cases." That was an allusion to an incident this year in which a local Freedom Party official published a poem comparing migrants with rats, and various other incidents involving party members.

On election night, Kurz could face "the choice between pestilence, cholera and Ebola," said Thomas Hofer, the analyst. A new alliance with the Freedom Party would be feasible in terms of policies but would be unstable, he said, as would a potential three-way alliance with the Greens and Neos.

Then there would be the option of a "grand coalition" with the Social Democrats — a familiar combination that governed Austria for much of its post-war history. Kurz helped end a Social Democrat-led "grand coalition" in 2017, and forming a new one would force him "to write off his story of change, which made him popular in the first place," Hofer said.

Kurz has been keeping his options open, telling ORF that "every democratically elected party can potentially be in a government."

"My favorite option is to form a coalition that does good work for Austria, in which we can continue along the path of change, we can carry out the necessary reforms, in which we don't argue and work for the country," he said.

And if a stable coalition isn't possible, he said, "a minority government is also an option."