Kyle Kuzma "clicked" to drain two clutch three-pointers as the Los Angeles Lakers bounced back to score a 123-115 road victory over the Phoenix Suns on Tuesday. 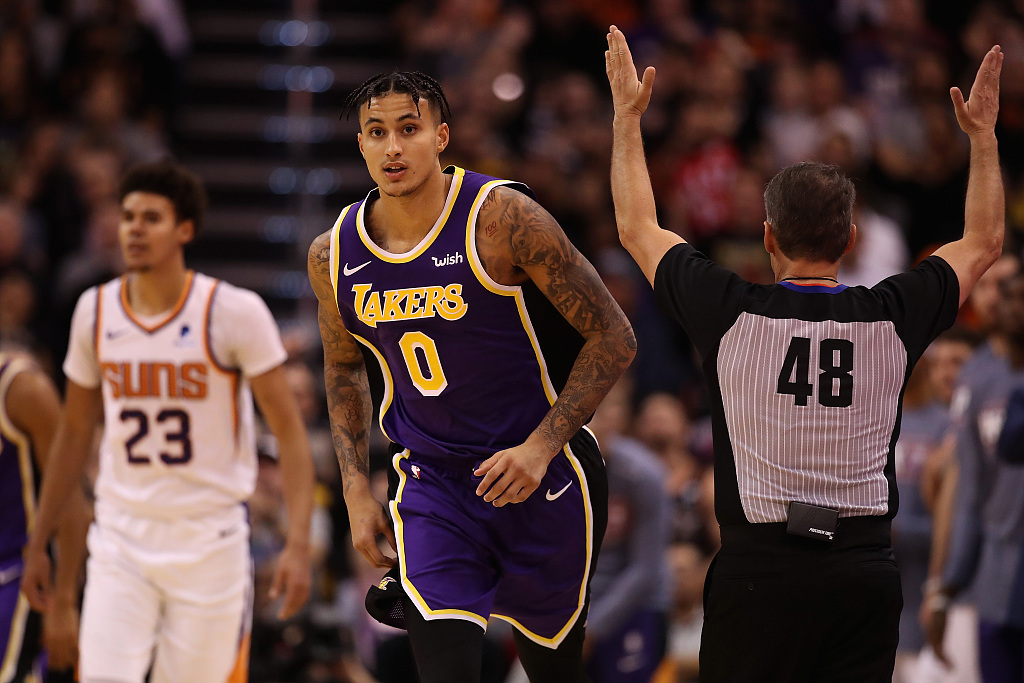 Kyle Kuzma #0 of the Los Angeles Lakers reacts after hitting a three point shot over Cameron Johnson #23 of the Phoenix Suns during the second half of the NBA game at Talking Stick Resort Arena on November 12, 2019 in Phoenix, Arizona. (Photo: VCG)

Kuzma hit back-to-back threes in the final three minutes of a see-saw battle to finally sink the Suns, shortly after Phoenix had taken a 113-111 lead with 3min 29sec left at the Talking Stick Resort Arena.

"I've been finding my rhythm all season," Kuzma said of his crucial pair of late three-pointers.

"I feel like every single game I've been getting better with my rhythm and timing.

"It kind of clicked a little bit. I know I can shoot," added Kuzma, who finished with 23 points off the bench while Anthony Davis led the Lakers with 24 points and 12 rebounds.

James added 19 points, 11 assists and seven rebounds as the Lakers made an instant return to winning ways following Sunday's loss to Toronto.

James meanwhile praised the contribution of Kuzma, saying he had never doubted the 24-year-old's ability to deliver.

"It was only a matter of time," James said. "And it came at the right time, against a tough team. It was great to have the Kuz that we know he's capable of.

"He was very patient, took the shots that came to him ... Kuz is a huge piece of this puzzle."

The win saw the Lakers improve to 8-2 at the top of the Western Conference, continuing the franchise's resurgence under head coach Frank Vogel.

Phoenix meanwhile fell to 6-4 with the defeat. Devin Booker and Ricky Rubio led the Suns scoring with 21 points apiece.