TOKYO, May 27 (Xinhua) -- The suspect in the deadly arson attack last July at a studio of Kyoto Animation Co. in western Japan was arrested Wednesday on suspicion of murder and other charges, local police said. 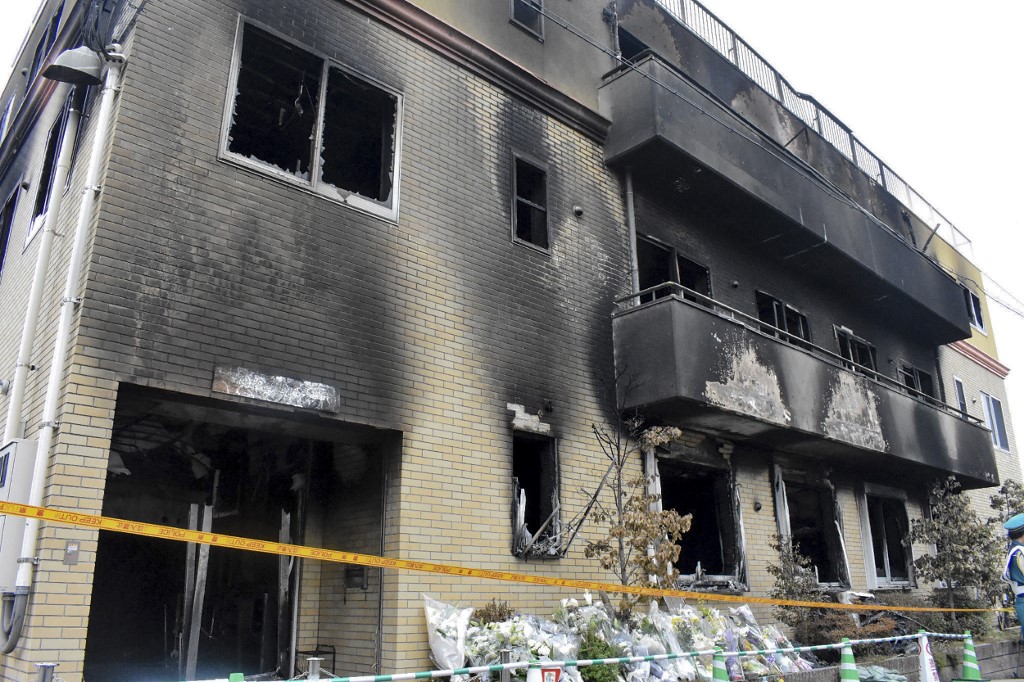 A general overview of the Kyoto Animation studio building hit by a fire on July 18, killing dozens of people, in Kyoto on July 20, 2019. (File photo: AFP)

The arrest of Shinji Aoba, 42, was made following the alleged arsonist being judged to have recovered enough from the serious burns he sustained during the attack, to face charges against him, police added.

Aoba had undergone multiple skin grafts at a specialist facility to help him recover from the life-threatening burns he allegedly sustained during the alleged attack, with police holding back on arresting and fully interrogating him until medical staff deemed the suspect fit.

Although still largely confined to a bed due to his injuries, police arrested him Wednesday at a hospital in Kyoto Prefecture and relocated him to a police station for questioning around 10 months after he is suspected of carrying out the fatal attack.

Local police said Wednesday the suspect had admitted to carrying out the arson attack, with Aoba quoted as saying, "There is no mistake."

KyoAni, as is known affectionately not just in Japan but worldwide, saw its studio in Osaka go up in flames as the result of the suspected arson attack, which claimed the lives of 36 talented individuals, injured 33 others and left a deep scar on the animation industry that will take years to heal.

According to local police reports, on July 18 at around 10:30 a.m., a man in his 40s believed to be Aoba from Saitama Prefecture near Tokyo entered the studio building with two 20-liter cans of gasoline that he had bought from a nearby gas station.

He is then alleged to have shouted "Die!" while dousing the building and possibly its occupants in the vicinity in the flammable liquid, before igniting it.

Neighbors at the time said they heard numerous loud explosions and saw black smoke billowing from the three-story building.

At the time of the alleged attack, there were believed to have been around 70 people inside the building, some of whom were animators, others who were studying to become artists in the industry, among other professionals.

Firefighters and police said that most of the 36 people killed in the blaze were found on a stairway that led to the building's roof.

They said that around 19 victims were found collapsed on the stairs connecting the third floor to the rooftop.

The door to the flat rooftop, the only lifeline and escape route for the victims, was locked when the firefighters arrived, they said.

On the second floor, around 11 others were found dead, and more lives were lost on the first floor and on the stairs between the second and third floors, the firefighters said.

Firefighters on the scene at the time recounted heinous images of bodies being piled up on stairwells as the victims presumably tried to flee from the blaze to the roof top, only to be overcome by carbon monoxide poisoning.

More than 30 people were also injured in the inferno, which firefighters finally extinguished at 6:20 a.m. the following day.

The fire, which saw 30 fire engines deployed, was one of the worst seen in decades in Japan, fire officials said.