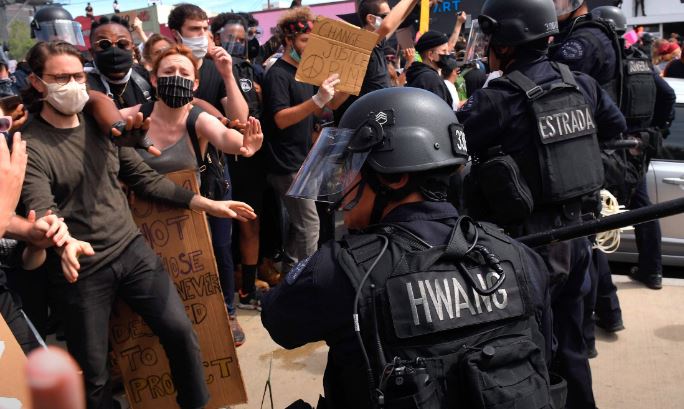 California Governor Gavin Newsom declared a state of emergency in Los Angeles County, the most populous county in the United States with over 10 million inhabitants, after protests over the killing of George Floyd turned violent on Saturday.

Newsom also authorized assistance after a request from the city and county of Los Angeles, and will deploy members of the National Guard to assist Los Angeles and neighboring communities, according to a statement released by the governor's office Saturday night.

Los Angeles Mayor Eric Garcetti announced earlier that a curfew will be in effect in the city beginning from 8:00 p.m. Saturday to 5:30 a.m. Sunday local time.

Protests against police brutality spread across America, leading to one of the country's worst nights of civil unrest in years with police cars and other property set alight and destroyed in New York, Dallas, Atlanta, Los Angeles and other cities.

In an extraordinary move, the Pentagon said it put military units on a four-hour alert to be ready if requested by the Minnesota governor to help keep the peace.

In a surreal moment for Miami on Saturday, police sirens and lights flooded downtown neighborhoods as fireworks began crackling and booming over Biscayne Bay to honor healthcare workers fighting the pandemic. Hundreds of police in riot gear swarmed the area, threatening to arrest anyone, including media, who ventured onto the streets.

It marked the fifth night of such clashes, the second since Friday's announcement that Derek Chauvin, the policeman seen kneeling on Floyd's neck, had been arrested on murder charges in Floyd's death.

"We cannot and must not allow a small group of criminals and vandals to wreck our cities and lay waste to our communities," Trump said. "My administration will stop mob violence. And we'll stop it cold."

The full Minnesota National Guard was activated for the first time since World War Two after four nights of arson, looting and vandalism in parts of Minneapolis, the state's largest city, and its adjacent capital, St. Paul.

Minnesota Governor Tim Walz said the deployment was necessary because outside agitators were using protests over Floyd's death to sow chaos.

"We are under assault," Walz, a first-term governor elected from Minnesota's Democratic-Farmer-Labor Party, told a briefing on Saturday. "Order needs to be restored."