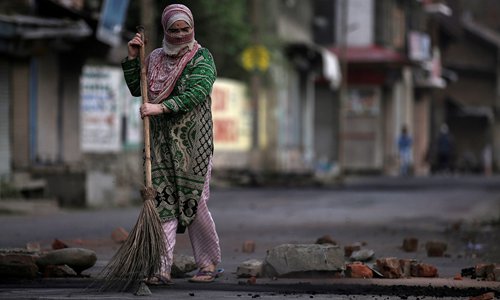 India's rise is not directly linked to the move revoking the special status of Kashmir, but it will help the economic rise of Jammu, Kashmir and Ladakh, which is home to 1 percent of the Indian population, Shakti Sinha, director of India's Nehru Memorial Museum and Library (NMML), told the Global Times.

Sinha was once part of the Indian Administrative Service from the 1979 batch, and also previously served as a Joint Secretary in the Prime Minister's Office.

"Corruption is rampant in the local government. The lavish funding it has received from the central government has not benefitted the common citizens as much as it should have. This had to change," Sinha claimed.

He believed that it is necessary to give Ladakh its "own identity." "The Ladakh region, with a population of less than 300,000, has been consciously discriminated against by successive regimes, which have always been dominated by Kashmiri politicians. The Ladakhi have always objected to being a part of the State of Jammu & Kashmir," he said.

"The Jammu region also suffered from neglect but not to the same effect," he added.

According to Sinha, Narendra Modi's Bharatiya Janata Party won the Ladakh parliamentary constituency with the promise that Ladakh would be separated from Jammu & Kashmir and made into a Union Territory. The Jammu region and Kashmir valley are now together as a Union Territory with a legislature.

Sinha noted that the population of the soon-to-be-­established Union Territory of Jammu and Kashmir is 12.5 million, of which Muslims make up more than 68 percent and Hindus around 28 percent. Muslims are also the largest religious denomination in Ladakh at around 46 percent. Buddhists make up 39 percent.

"Therefore, to link this move with an alleged effort to further the so-called 'Hindu' agenda has no basis," he said.

"The new Union Territories are expected to improve public order and create conditions that would facilitate economic growth, including in the sparsely populated Ladakh region. There are no international implications to the new Constitutional setup in the State of Jammu & Kashmir."

Sinha told the Global Times that he thought the Modi government has acted on its promise after its re-election in May. He said that many opposition parties supported Modi's move in Kashmir. "Without [their] support the Parliamentary Motion would not have passed in the Upper House [Rajya Sabha] of Parliament."

Talking about Modi's foreign policy, Sinha said that the Modi government acts in the country's national interest. "It believes in working with other countries like China since economic interdependence is in both our interests. It does not seek confrontation, and does not believe in ganging up against anybody."