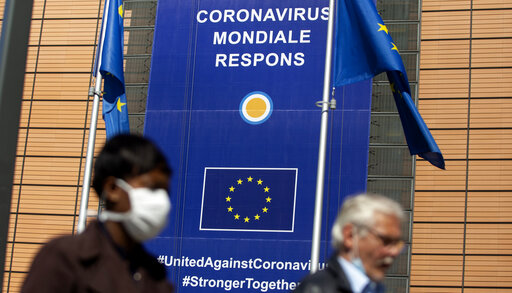 A woman wearing mouth mask, to prevent against the spread of the coronavirus, COVID-19, walks past EU headquarters in Brussels, Thursday, May 7, 2020. (File photo: AP)

European Central Bank chief Christine Lagarde said Monday it is "crucial" that the EU's 750-billion-euro coronavirus recovery plan succeeds and that the promised funding is disbursed.

"If (the money) is not targeted, if it disappears into the administrative machinery and does not reach down into the real economy to drive our countries toward the digital and green (economy), then we will have missed a historic opportunity to change direction," Lagarde said in an interview with Le Monde published on the newspaper's website.

The plan, unprecedented in its scope and commitments, was agreed by European Union leaders in July but has since been held up in the European Parliament by disputes over whether payments should be linked to strict implementation of EU rights policies by member states such as Poland and Hungary.

Asked whether she was concerned that the rescue funds might be delayed and arrive too late, Lagarde said: "The European Commission's objective is to be able to disburse the money at the beginning of 2021 and that absolutely has to be kept to.

"It is now up to the member states, who have to submit their recovery plans -- some are already done -- and up to the Commission, which must review them quickly," said Lagarde, a former French finance minister and head of the International Monetary Fund before taking over at the ECB.

"It is crucial that this exceptional plan, which broke important taboos (on the EU's role) in several countries, should be a success," Lagarde added.

The key breakthrough in the EU package came from Germany and its agreement to borrow money and spend it collectively to help states whose weak finances it had up to then deemed to be an insuperable obstacle to such joint action and responsibility.

On Friday, French President Emmanuel Macron called for a "spirit of compromise" to resolve the differences over the recovery plan in the European Parliament.