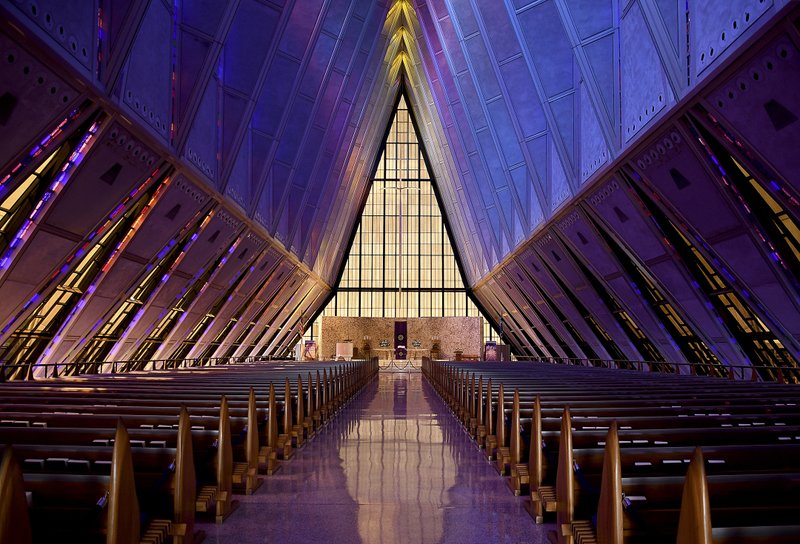 Light shines through the stained glass at the Cadet Chapel at the US Air Force Academy outside Colorado Springs, Colorado on April 12, 2017. (Photo: AP)

The landmark Cadet Chapel that towers over the US Air Force Academy in Colorado is suffering from leaks and corrosion, so the school has drawn up the most ambitious restoration project in the building’s 55-year history.

But the repairs have been on hold for months while officials try to settle on a contractor for the long and complicated project.

Water has been seeping through seams in the chapel’s aluminum skin for years, said Duane Boyle, the academy’s campus architect. Repeated applications of caulk to seal the seams have contaminated and degraded the metal.

“We had to make a serious decision on what the future of the building was going to be,” Boyle said.

The chapel, completed in the early 1960s and dedicated in 1963, is easily the most recognizable building on the campus. The 17 gleaming spires that form the jagged exterior walls resemble rows of jet fighter wings taking aim at the sky.

“From the outside, it invites participants to come indoors,” said Lt. Col. Lance Giannone, a protestant chaplain at the academy. “It has a design that reflects upward toward the heavens and God.”

The chapel attracts 800,000 visits a year, the academy said, including 500,000 by tourists and another 300,000 by people attending services, weddings and funerals.

The design incorporates many traditional elements of a church, including a simple nave in the main-floor chapel with a central aisle that divides rows of pews. It also uses some traditional church materials such as stained glass and stone.

But the exterior is a striking departure into modernism, with its aluminum panels and angular, wing-like spires, said Bill Richards, an architectural historian.

“I would consider it a real high point for modern architecture,” he said.

The American Institute of Architects honored the chapel in 1996 with its Twenty-five Year Award, for precedent-setting buildings that still stand out after 25 to 35 years.

Netsch wanted to make a “living building” that would change appearance during the day, so he used aluminum panels with striations or lines in the surface that reflect light differently depending on the sun’s position, Boyle said.

“Light from the sun catches those striations so the building actually changes tone,” he said. “The other buildings stay static all day. That was part of Walter’s vision.”

The main floor is the protestant chapel. The building has separate spaces for Catholic, Jewish and Muslim services, and a multipurpose room is used for Eastern Orthodox and other faiths.

The leaks and corrosion can be traced to cost-cutting that dictated construction compromises, Boyle said.

Necht’s design called for installing sections of sheet metal called internal flashing beneath the seams of the aluminum skin to intercept rainwater and melting snow that got through. The flashing would have carried the water to the ground without reaching the structure underneath.

To keep the chapel within budget, the Air Force skipped the flashing and opted to seal the seams with caulk.

“At that point, nobody really thought the chapel would leak as it has,” Boyle said.

The restoration plan calls for replacing all the aluminum skin and installing the internal flashing that Netsch wanted, but using silicone instead of metal.

The chapel’s structure needs strengthening to reduce swaying in the winds that sometimes blast the campus at the foot of the Rocky Mountains outside Colorado Springs. Officials also plan to remove and clean about 24,000 pieces of stained glass.

The construction budget forced other compromises. Netsch designed a chapel that had 21 spires and stretched 284 feet (87 meters). To cut costs, it was trimmed to 17 spires, which made the length 236 feet (72 meters), Boyle said.

Netsch, who died in 2008, left room on the site in case the four sacrificed spires could be added someday, Boyle said.

Asked if that might happen, Boyle replied, “Need to fix the leakage problem first.”

The academy said the fixes could cost anywhere from $25 million to $100 million and take up to four years. The chapel will be closed to the public for the duration.

The repairs were originally scheduled to start last summer but have been postponed twice as academy officials ask bidders for clarification, Boyle said. The start date is now June 2019.

Boyle said the price of the bids was not a factor in the delays.

“This is a very large, complicated project,” he said. “We’d rather get it right going in.”