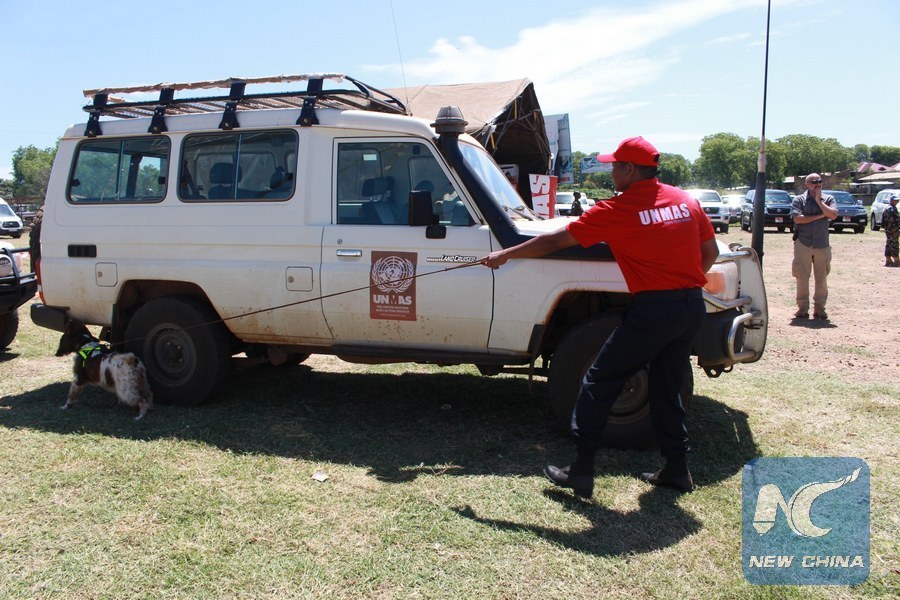 A UNMAS worker demonstrates how bomb and land mines detecting sniper dog works, during an event to mark the 71st anniversary of the UN in Juba, South Sudan, Oct. 24, 2016. (Xinhua/Julius Gale)

Some 6 million people in South Sudan live in areas with the presence of landmines and explosive remnants of war, the UN mines agency in the East African country said Saturday.

The agency said an estimated 150 previously unknown hazards are discovered each month, with the full extent of contamination unknown, calling for a countrywide survey.

UNMAS said the existence of explosive hazards prevent the delivery of humanitarian aid and hinder socioeconomic development in the world's youngest nation.

"In addition to the threats posed to the safety of conflict-affected communities, explosive hazards prevent the safe movement of the population including those who must flee active conflict," UNMAS said in a statement marking the UN body's 20th anniversary.

UNMAS said since it started operations in the war-torn country in 2004, it has surveyed, cleared and released 1.184 million square meters of land back to the people of South Sudan.

As the UN body celebrates its 20th anniversary Saturday, it pledged commitment to implements all aspects associated with mitigation of the threats from mines and explosive remnants of war.