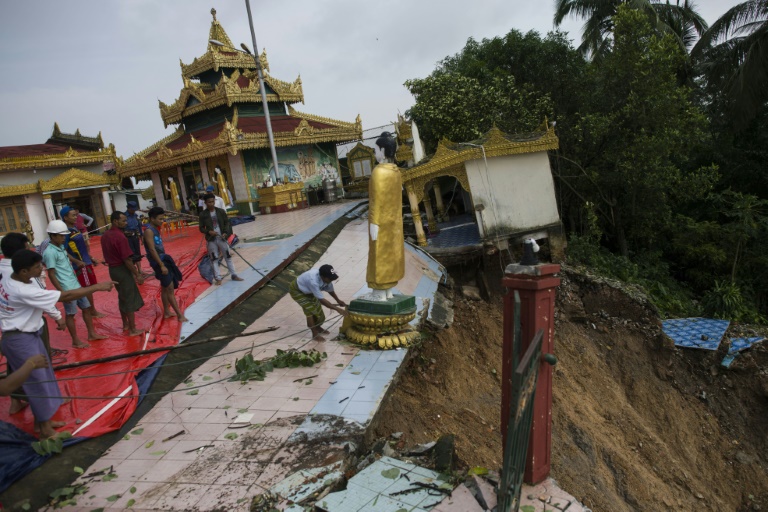 Workers are helping to relocate Buddha statues from a pagoda in Mawlamyine that was damaged in a landslide (Photo: AFP)

Flooding in southern Myanmar has caused a landslide at a famed Buddhist pagoda, submerged homes and displaced hundreds of people as monsoon rains batter the country.

Several parts of Myanmar's southern Mon state are facing flash floods due to heavy rains since the weekend with no relief in sight, according to a report in the state-run Global New Light of Myanmar on Monday.

Rains triggered a landslide that damaged the hilltop Kyeik Than Lan pagoda, whose golden stupa towers over state capital Mawlamyine.

AFP correspondents on Monday saw workers helping to relocate Buddha statues and novice monks helping clean up debris at the religious site after a wedge of hillside slipped away.

Bo Win, a resident helping with the flood response, told AFP that around 1,000 people were sheltering in several sites around Mawlamyine.

"This is the worst flood in the state that I have ever seen," said Nyan Soe, another local resident.

About 150 residents further south of Mawlamyine were evacuated to a government school after dozens of homes and bridges were submerged, while a monastery was destroyed across the river from the city, the New Light reported.

So far no casualties have been reported in the state, but rains continue to pound swathes of the country.

Last week five people were killed after monsoon rains triggered a landslide in Mogok, a northern Myanmar town famed for its ruby mines.

Myanmar is one of several countries in the region to face severe yearly flooding. In 2015 it topped a global list compiled by climate scientists of nations hardest hit by extreme weather.

That year more than 100 people died in floodwaters that also displaced hundreds of thousands across the country.

Some 138,000 people died in 2008 when Cyclone Nargis lashed vast stretches of Myanmar's coast.