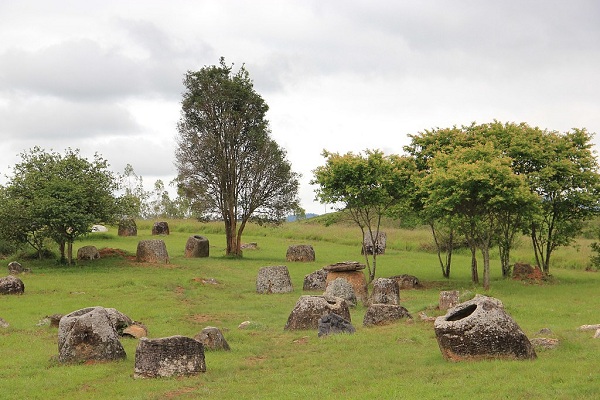 The Landscape of the Plain of Jars (File Photo: VCG)

"I would like to express my deep gratitude to the UNESCO World Heritage Centre, all members of the World Heritage Committee, advisory bodies and ICOMOS experts for precious contribution and support to the protection of this archaeological site as a common heritage of humanity, without their support, expertise, hard work this inscription would not have been possible, " said Minister Bosengkham Vongdara.

Minister Bosengkham also expressed highest appreciation and acknowledgement to the Lao government for contributing and supporting the inscription of the megalithic jar sites, whick lies some 180 km northeast of Lao capital Vientiane.

The Plain of Jars has become the third Lao UNESCO World Heritage site, after Luang Prabang inscribed in 1995, and pre-Angkor Vat Phou (Champasak province) in southern Laos listed in 2002.

"We will submit the first application for a world heritage status for Hin Nam Nor and we hope to be able to submit the final application in 2020,” said Bosengkham, adding that the Lao government is preparing for a new listed site.

The UNESCO recognition of the Plain of Jars was officially announced last month, during the 43rd session of the World Heritage Committee in Baku, the Republic of Azerbaijan.

“The grand celebration of the Plain of Jars in Xieng Khuang province as a UNESCO’s world heritage site will be held in Xieng Khuang on the beginning day of the National Games, also hosted in Xieng Khuang, on March 22, 2020,” said Bountone Chanthaphone, governor of Xieng Khuang Province at Thursday's press meeting.

The Plain of Jars gets its name from more than 2,100 tubular-shaped megalithic stone jars used for funerary practices in the Iron Age, according to UNESCO.

Located on hill slopes and spurs surrounding the central plateau, the jars are large, well-crafted, and required technological skill to produce and move from the quarry location to the funerary sites.

The jars and associated elements are the most prominent evidence of the Iron Age civilization that made and used them, about which little is known. The sites are dated from between 500 BCE and 500 CE (and possibly up to as late as 800 CE).

The plain of jars is located at an historical crossroads between two major cultural systems of Iron Age southeast Asia, the Mun-Mekong system and the Red River/Gulf of Tonkin (Beibu Wan) system. Because the area is one that facilitated movement through the region, enabling trade and cultural exchange, the distribution of the jars sites is thought to be associated with overland routes, according to Lao News Agency (KPL) on Friday.