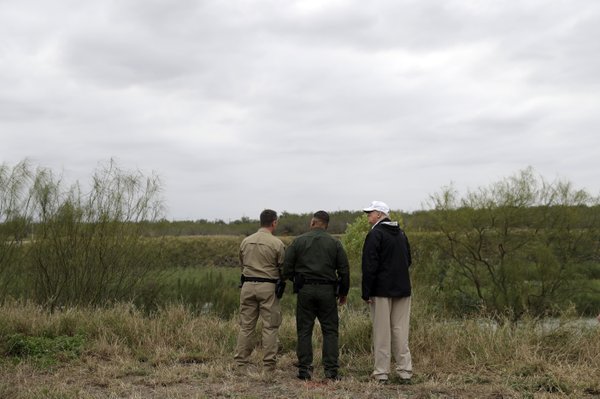 In this Jan. 10, 2019, file photo President Donald Trump, far right, tours the US border with Mexico at the Rio Grande on the southern border in McAllen, Texas.  (Photo: AP)

Central Americans are increasingly entering the United States illegally in groups of at least 100 people in rugged, remote stretches of the Mexican border, authorities said Friday upon releasing January figures that show total arrests fell for a second straight month.

A group of 325 Central Americans surrendered to agents Thursday near Lukeville, Arizona, according to Customs and Border Protection. Migrants told authorities that buses and trucks dropped them off throughout the night on a nearby Mexican highway that runs parallel to the border and they entered the US together to wait for agents to find them. There were nearly 150 children, including 32 who were traveling alone.

The Border Patrol has encountered groups of at least 100 people 60 times since Oct. 1, compared to 13 during the entire 2018 fiscal year and two in the 2017 fiscal year, officials said. Many are in the desolate New Mexico Bootheel and Arizona deserts

It is unclear what’s driving the sudden uptick of large groups in remote areas but families, many of them Central American asylum seekers, make up a large and growing percentage of arrests across the border.

US authorities arrested or stopped people for immigration violations 58,207 times in January, down 4 percent from 60,779 in December but up 62 percent from 35,905 in January 2018. It was the second straight monthly decline, though arrests typically fall from December to January.

Families and children traveling alone accounted for 33,861 of those encounters, or nearly 6 of every 10 stopped at official crossings or arrested for entering the country illegally between crossings, mostly from Guatemala, El Salvador and Honduras. That’s a dramatic change from several years ago when most people who crossed illegally were single Mexican adults.

The January numbers are unlikely to swing public opinion either way in President Trump’s showdown with Democratic leaders in Congress over funding to replace and extend border walls with Mexico. The impasse led to a five-week partial government shutdown that ended when Trump agreed to reopen the government until Feb. 15.

The large percentage of families and young children has stretched US authorities, even more in remote areas where staffing is thinner. Customs and Border Protection says medical attention was needed about 12,000 times for border crossers in the 12-month period ending Sept. 30.

On Jan. 14, a group of 376 Central Americans was arrested near San Luis, Arizona, the vast majority of them Guatemalan families who dug short, shallow holes under a barrier to cross the border, according to authorities.