Las Vegas torn by virus as casinos clamor to reopen 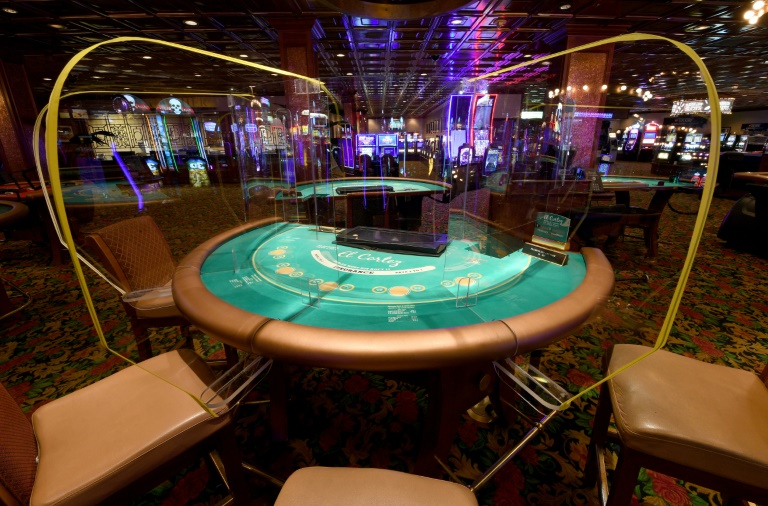 The length of time of the Las Vegas shutdown -- and whether it was even necessary -- has triggered heated debate. (Photo: AFP)

A smattering of cars drove past the eerily quiet hotels and casinos, shuttered since mid-March, while a handful of tourists gathered by the "Welcome to Fabulous Las Vegas" sign to take photos.

But beneath the quiet of the world-famous Strip, Sin City is in turmoil.

A tug of war has emerged between the need for safety during the coronavirus pandemic and the survival of the gambling capital's tourism industry, which some casino operators fear will never be the same.

Nevada's Culinary Union Local 226, which represents some 60,000 casino and hotel workers, has had 98 percent of its members laid off, according to secretary-treasurer Geoconda Arguello-Kline.

At least 12 union members have died from the COVID-19 outbreak, out of Nevada's total death toll of 243.

Arguello-Kline said the union fully supports Nevada Governor Steve Sisolak's decision to extend the lockdown until at least May 15.

"He is doing what he can to protect us," she told AFP. "I know it is tough for people, but if you lose your life, you have lost what is most important."

But the length of time of the shutdown -- and whether it was even necessary -- has triggered heated debate in Las Vegas.

Mayor Carolyn Goodman has called the shutdown "insanity," and has pleaded for the city to be reopened.

In a statement released last week, Goodman –- who still enjoys support among many Las Vegas residents eager to get back to work -- emphasized the need to reopen in the "safest" way.

"Las Vegas is in a unique economic crisis," she wrote.

Key to the debate is how Las Vegas casinos could safely reopen their doors if the restrictions were lifted.

Inventors have touted Plexiglas barriers at blackjack tables and other card tables, which would separate the dealer and each player.

Some resorts have rolled out thermo-imaging plans to check patrons' temperatures at a casino entry.

Arguello-Kline said social distancing measures must be put in place, from restaurants to elevators, along with personal protective equipment such as masks and gloves for workers.

"Extra cleaning and sanitizing at restaurants" is needed, she added.

But Tim Brooks, the owner of the Emerald Island Casino in neighboring Henderson, is leery of any plans that would intrude on his customers' privacy.

"I don't want to be taking everybody's temperature who comes through the doors, as we are not medically trained," he said.

"And, it is going to be 104 or 105 degrees outside in the summer. So, how can you tell who really has a temperature?"

Las Vegas gaming historian David Schwartz admitted nobody really knows what a reopened Las Vegas -- and its many casino nightclubs, pools and buffets -- will look like.

"No matter when they open (Las Vegas casinos), the question will be, 'How many visitors will come back?'" he said, flagging the international travel bans in place.

"There's a way to adapt, but I don't know what that would be."

Even if his Skyline Hotel-Casinos and other properties can be safely reopened, owner Jim Marsh said social distancing measures could be too onerous and cost prohibitive.

"If it drives up the overhead too much, we might stay closed," Marsh explains. "You can't have people sit four feet apart at a bar and make money."

"I have live entertainment seven nights a week, but the band members stand close to each other, and it is close to the bar," he added. "I would have to get rid of it."

Brooks, whose casino operates on a small margin, said he was disappointed and confused by the decision to extend the lockdown.

He had already furloughed 131 of his 166 workers at Emerald Island, trying to find enough work for the few employees essential to maintaining operations while closed.

"I may have to lay off more people," Brooks said of the reopening delay. "There are on only so many railings to polish."

For the furloughed workers themselves -- 350,000 have claimed unemployment benefits across the state -- the situation is even more urgent.

Bob Aquino, a 66-year-old restaurant manager at Brooks' casino, was lucky enough to get his unemployment. His wife was laid off from a local chamber of commerce, losing her health insurance, and is unlikely to be rehired.

"Without that, I would be on a street corner with an 'I will work for food' sign," he said. "I would tell the governor: 'Open Nevada. Let's get back to work. Enough is enough.'"