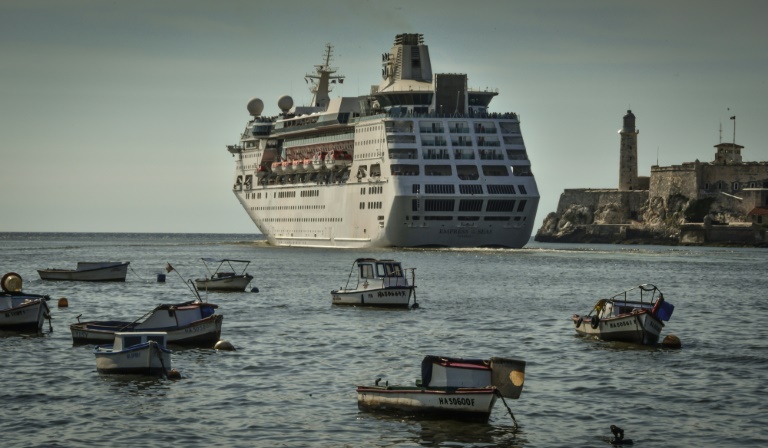 The Empress of the Seas, the last US cruise ship to stop in Havana, heads out to sea after the Trump administration orders a halt to such visits. (Photo: AFP)

The last US cruise liner to stop over in Cuba sailed out again Wednesday as stepped-up US sanctions against the country came into force.

Cubans who have welcomed and benefited from such visits as part of a rapproachment with the United States under Barack Obama in 2015 and 2016 watched sadly as the Empress of the Seas headed out to sea.

Passengers waved from the deck of the huge white vessel and waved small red, white, and blue Cuban flags.

The Bahamian-flagged ship operated by US company Royal Caribbean Cruises docked in Havana on Tuesday just as the new sanctions were announced, taking many passengers by surprise. It was supposed to stay for two days, but has now left early.

President Donald Trump ordered a halt to these cruise ship stopovers and a clamp-down on US visas for visiting Cuba as part of a strategy to cut the flow of dollars to a country that Washington accuses of helping prop up Venezuelan President Nicolas Maduro.

Mario Diaz, a 19 year old disc jockey waiting for a bus as he watched the cruise ship depart, said Obama's visit here a year after the longtime Cold War foes restored relations in 2015 was an unforgettable event and one that brought great hope.

"All this is so sad, really," said Lopez, "for Trump to come in and turn everything back from one day to the next."

Fernando Santana, a 50-year-old fisherman, remembers using his cell phone to film the arrival of the first US cruise ship back in 2016. He recalls how Cubans and visitors alike shouted with joy as blasts from its fog horn echoed across the port of Havana.

Santana said Obama had worked hard to bring Americans and Cubans together. "Then a donkey came along, and with its feet it kicked down everything that the other guy had done with his head," said Santana.

Americans who were on the departing ship said they knew nothing about the new US sanctions. Some found out while walking around Havana during the abbreviated port call.

"Right or wrong, we know nothing about it as American citizens. It was a total surprise to us," passenger Linda Mensure from Texas told AFP.

"We have got people scheduled to come next week and now they won't be able to. It's sad," said Jim Johnson, from Florida, referring to vacationers who had bought tickets for cruises that were to include Cuba on the itinerary. 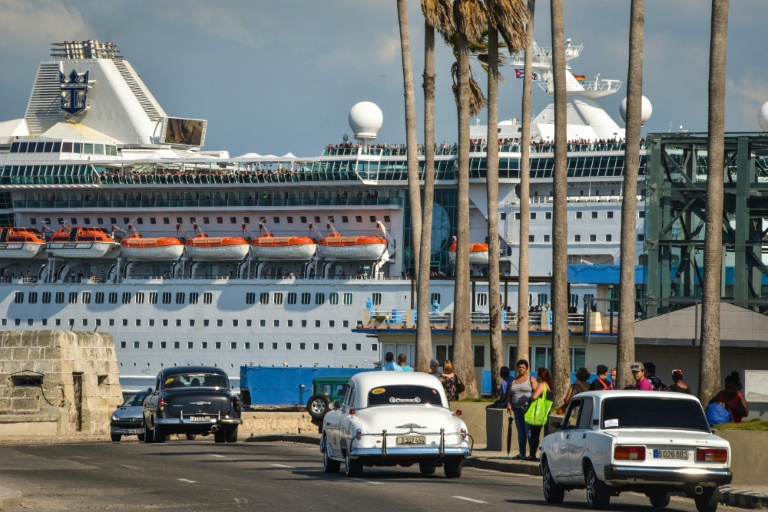 Cubans have come to welcome and benefit from US cruise ship visits since relations between the two foes were restored under Barack Obama in 2015. (Photo: AFP)

"I'm one of hundreds of very angry passengers aboard a cruise ship in the middle of the Caribbean," said Cindy Hamilton, a nurse from Terre Haute, Indiana, said in a tweet. "We all planned this cruise anticipating our stop in Cuba. Very upset!"

The Treasury Department banned group educational travel, cruise ship and private yacht visits by Americans, taking aim at the most common ways US tourists and Cuban-Americans visit the Caribbean island.

The move could constitute a heavy hit on Cuba, which saw more than a quarter-million US visitors in the first four months of 2019, almost double the figure from a year earlier.

The Cruise Lines International Association said the new US measure will affect nearly 800,000 reservations that were already made or being finalized.

Cuba and the United States restored ties in 2015 and Obama himself visited Havana in a historic presidential trip in March 2016, meeting with then-president Raul Castro.

Weeks later, the ban was lifted on US commercial ship visits, opening the door for the Caribbean cruise ship industry to expand stops in Cuba.

American tourism in Cuba had taken off after Obama moved to ease the half-century trade embargo against the Cuban government in 2014 -- even though continuing restrictions kept visits nominally in the realm of cultural and artistic exchanges and business dealings.

However, the Obama initiative was attacked by Trump, who began restricting relations within months of taking power in 2017.