WORLD Last-ditch effort to save Brexit trade talks from failure

Last-ditch effort to save Brexit trade talks from failure 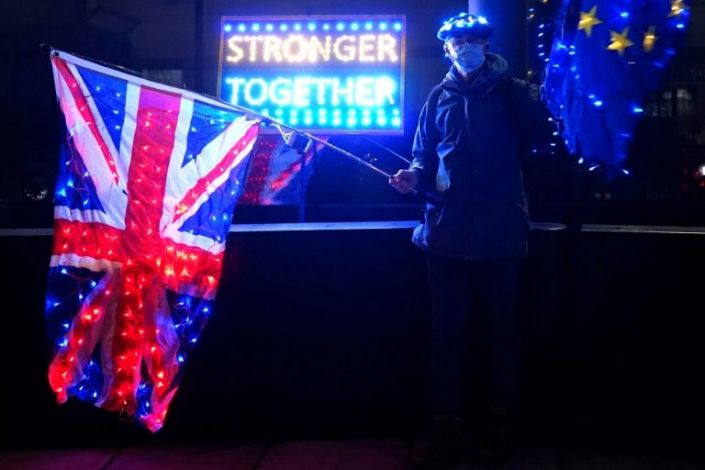 British and EU negotiators embarked on probably their final two-day scramble to secure a post-Brexit trade deal Sunday, after failing for eight months to reach agreement.

David Frost and Michel Barnier took up from where they left off in EU headquarters in Brussels, ending a two-day pause after a fruitless week of late-night wrangling in London.

"We're working very hard to try to get a deal. We'll see what happens in the negotiations today," Frost told reporters as he arrived at the city's Gare de Midi train station.

Talks were expected to go late on Sunday and into Monday, as a small team of the most senior negotiators haggled over the last remaining, but most contentious issues.

The pair's next call will be on Monday evening and then the 27 EU leaders will gather in Brussels on Thursday for a two-day summit planned to tackle their own budget dispute, but which will now once again be clouded by Brexit worries.

Johnson and von der Leyen issued a downbeat joint statement after their call, with divisions still wide over fishing rights, fair trade rules and an enforcement mechanism to govern any deal.

"Whilst recognising the seriousness of these differences, we agreed that a further effort should be undertaken ... to assess whether they can be resolved," they said.

Ireland would be the EU member worst hit by a failure to strike a deal and Foreign Minister Simon Coveney insisted agreement was crucial to avoid more damage to an economy already reeling from the Covid-19 pandemic.

Failure "doesn’t make any political sense and it certainly doesn't make any economic or social sense either", he told RTE news.

"And for all those reasons, I think that the negotiating teams and senior politicians will find a way of getting a deal here, but at the moment we're in a difficult place as we try to close it out," he said.

Britain formally left the EU in January, nearly four years after a referendum on membership that split the nation down the middle and two months after Johnson won an election touting what he claimed was an "oven ready" Brexit deal.

The UK is bound to the EU's tariff-free single market until a post-Brexit transition period expires at the end of the year -- an immovable deadline by which time the two sides must try to agree on new terms for their future relationship.

"We're going continue to work on these negotiations until there's no point in doing so any further."

Without a deal, the bulk of cross-Channel trade will revert to World Trade Organization terms, a return to tariffs and quotas after almost five decades of close economic and political integration.

Johnson has insisted Britain will "prosper mightily" whatever the outcome of the talks, but he will face severe political and economic fallout if he cannot seal a deal.

"If there is no deal now, I see huge international implications... because we would be in an economic war with Europe that would cost us very dearly," former Labour prime minister Gordon Brown told Sky News.

European capitals have remained remarkably united behind Barnier through the fraught Brexit process, but some internal fractures have now begun to surface.

On Friday, France threatened to veto any deal that falls short of their demands on ensuring fair trade and access to UK fishing waters, where they have demanded a durable agreement, whereas Britain wants frequent renegotiations.

"But we need lasting access. The British can't have total access to our EU single market and exclude fish."

Barnier was to brief envoys from the bloc member states early on Monday with several countries sharing Paris's concerns that the EU side could give too much ground, especially on fair trade rules.