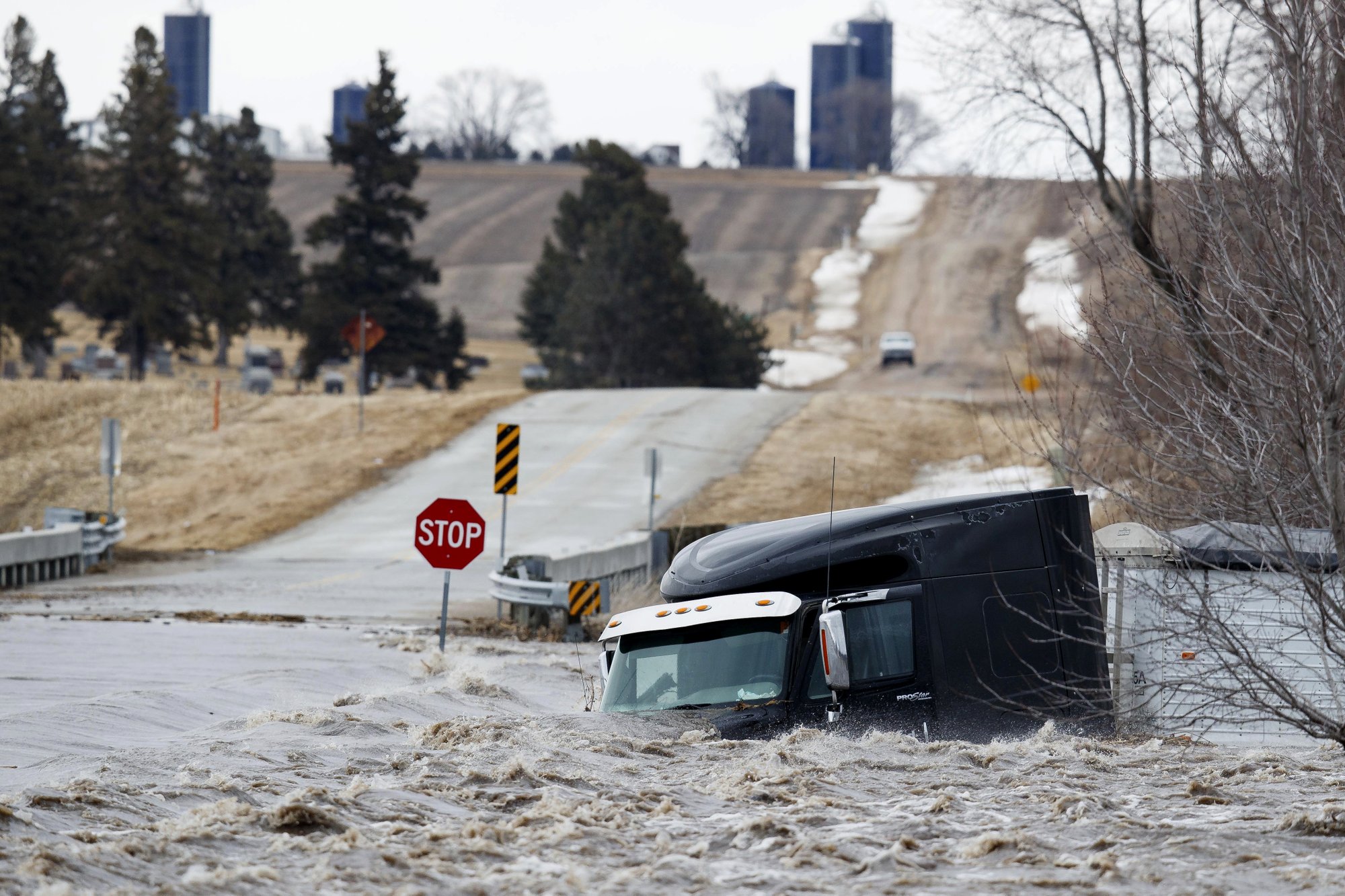 A semi truck and trailer are swept off the road by floodwaters Thursday, March 13, 2019, in Arlington, Neb. (Photo: AP)

A blizzard that paralyzed parts of Colorado and Wyoming barreled into the Midwest on Thursday, bringing whiteout conditions to western Nebraska and dumping heavy rain that prompted evacuations in communities father east.

Emergency crews responded after a vehicle was swept off a road in Norfolk, Nebraska, and rising water along the Elkhorn River prompted evacuations of the eastern side of the city of 24,000 people. The missing individual had not been found by midmorning Thursday.

South Dakota’s governor closed all state offices Thursday as the blizzard conditions moved in, while wind, blowing snow and snow-packed roadways made travel treacherous in western Nebraska. Heavy rain caused flooding in eastern parts of both states, as well as in Iowa.

The massive late-winter storm hit Colorado on Wednesday, causing widespread power outages, forced the cancellation of hundreds of flights and wreaked havoc on roadways as drivers became overwhelmed by blinding snow. A wind gust clocked in at 97 mph (156 kph) in Colorado Springs.

In the Texas Panhandle, a utility worker was killed while working to restore power amid strong winds pushed in by the storm. Wind gusts in the area exceeded 80 mph (128.74 kph).

The storm also contributed to the death of Daniel Groves, a Colorado State Patrol officer who was hit and killed by a car as he helped another driver who had slid off Interstate 76 near Denver.

The Red Cross reported Thursday that 620 people had stayed in shelters overnight in Colorado and Wyoming.

The window-rattling storm brought blizzards, floods and a tornado across more than 25 states Wednesday, stretching from the northern Rocky Mountains to Texas and beyond.

“This is a very epic cyclone,” said Greg Carbin, chief of forecast operations for the National Oceanic and Atmospheric Administration’s Weather Prediction Center. “We’re looking at something that will go down in the history books.”

The culprit was a sudden and severe drop in ground-level air pressure in Colorado, the most pronounced dive since 1950, Carbin said. It was caused by a combination of the jet stream and normal conditions in the wind shadow of the Rockies.

Air rushed into the low-pressure area and then rose into the atmosphere.

“It’s like a vacuum cleaner, really,” Carbin said. When that much air rushes higher into the atmosphere, it causes severe weather.

Meteorologists call the rapid change in pressure a “bomb cyclone” or “bombogenesis.”

A tornado in New Mexico ripped roofs from buildings in the small town of Dexter, about 200 miles (320 kilometers) southwest of Albuquerque. Authorities said five people were hurt, but none of the injuries was life-threatening. A dairy euthanized about 150 cows injured by the tornado.

High winds knocked 25 railroad freight cars off a bridge into a mostly dry riverbed near Logan in northeast New Mexico. No one was injured, New Mexico State Police said.