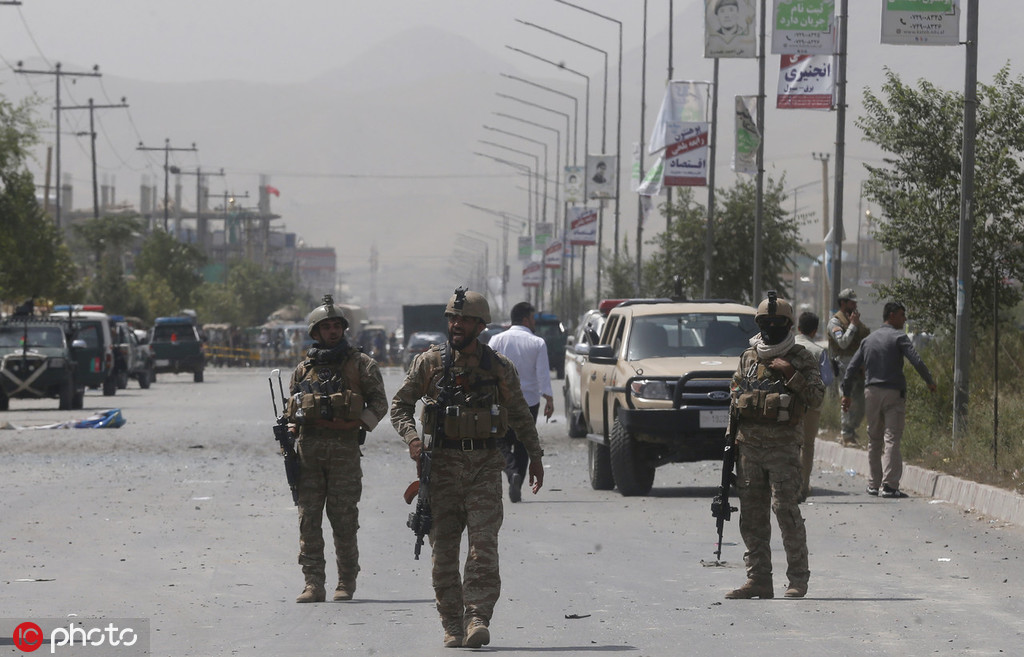 Afghan security men stand guard after an explosion near the police headquarters in Kabul, Afghanistan on Aug 7, 2019. (Photo: IC)

Taliban and US negotiators have wrapped up their latest round of talks seeking a deal that would see the United States shrink its troop presence in Afghanistan, a Taliban spokesman said on Monday.

The eighth round of talks in the Gulf Arab nation of Qatar concluded after midnight and was "long and useful", Zabihullah Mujahid said in a statement.

He made no statements on the outcome of the talks.

Last week, another Taliban spokesman had said a deal was expected to follow this round as both sides seek an end to the nearly 18-year war.

An agreement - if reached - is expected to include Taliban guarantees that Afghanistan would not be a base for other extremist groups in the future. However, both the Islamic State group's affiliate and al-Qaida remain active in the country. The Taliban stage near-daily attacks across Afghanistan, mainly targeting Afghan forces and government officials but also killing many civilians.

There was no immediate comment on Monday from US envoy Zalmay Khalilzad, who on Sunday tweeted that "I hope this is the last Eid where#Afghanistan is at war".

Sunday was the first day of the Muslim holiday of Eid-al-Adha, which unfolded without any major violence reported in Afghanistan.

Khalilzad later added that "Many scholars believe that the deeper meaning of Eid al-Hadha is to sacrifice one's ego. Leaders on all sides of the war in Afghanistan must take this to heart as we strive for peace".

Some in Afghanistan saw it as a response to President Ashraf Ghani, who on Sunday declared that "Our future cannot be decided outside, whether in the capital cities of our friends, nemeses or neighbors. The fate of Afghanistan will be decided here in this homeland. ... We don't want anyone to intervene in our affairs."

While Ghani insists that the upcoming Sept 28 presidential election is crucial for giving Afghanistan's leader a powerful mandate to decide the country's future after years of war, Khalilzad is seeking a peace deal by Sept 1, weeks before the vote.

The Taliban control roughly half of Afghanistan and are at their strongest since the US-led NATO invasion toppled their five-year government in 2001 after the group had harbored al-Qaida leader Osama bin Laden. More than 2,400 US service members have died in Afghanistan since then.

The United States and NATO formally concluded their combat mission in Afghanistan in 2014. Around 20,000 US and allied troops that remain are carrying out airstrikes on the Taliban and IS militants, and are working to train and build the Afghan military.