US President Donald Trump's latest round of tariffs on Chinese imports is likely to deliver a direct hit on many consumers, who were largely spared from higher prices in his previous rounds of import taxes. 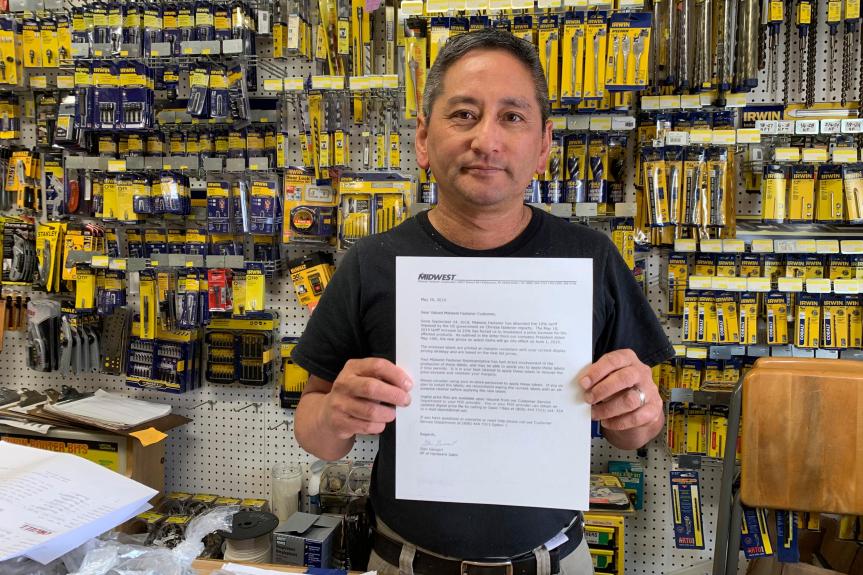 In this photo taken Wednesday, Aug. 28, 2019, Albert Chow, owner of Great Wall Hardware in San Francisco, holds a May 2019 letter from a supplier notifying him that prices will be increasing 10 to 18 percent because of US tariffs on Chinese goods. He says he has no choice but to raise store prices on those products. (Photo: AP)

Beginning Sunday, the US government will begin collecting 15% tariffs on $112 billion in Chinese imports — items ranging from smartwatches and TVs to shoes, diapers, sporting goods and meat and dairy products. For the first time since Trump launched his trade war, American households face price increases because many US companies say they'll be forced to pass on to customers the higher prices they'll pay on Chinese imports.

For more than a year, the world's two largest economies have been locked in a high-stakes duel marked by Trump's escalating import taxes on Chinese goods and Beijing's retaliatory tariffs.

American consumers have so far been spared the worst of it: The Trump administration had left most everyday household items off its tariff list (valued at $250 billion in Chinese products so far) and instead targeted industrial goods.

That's about to change. "They're on. They're on," Trump said Friday about the new tariffs that are set to kick in at 12:01 a.m. Sunday. Under the new schedule, 69% of the consumer goods Americans buy from China will face his import taxes, up from 29% now.

That isn't all. Higher tariffs are set to kick in for another batch of Chinese products — $160 billion' worth — on Dec. 15. By then, roughly 99% of made-in-China consumer goods imported to the United States will be taxed, according to calculations by Chad Bown of the Peterson Institute for International Economics.

"The bottom line is that, for the first time, Trump's trade war is likely to directly raise prices for a lot of household budget items like clothing, shoes, toys, and consumer electronics," Bown wrote in an report.

For months, Trump — who famously declared that trade wars are "easy to win" — falsely claimed that China itself paid the tariffs and that they left Americans unscathed. In fact, US importers pay the tariffs. They must make a high-risk decision: Whether to absorb the higher costs themselves and accept lower profits. Or pass on their higher costs to their customers and risk losing business.

This has become an ever-more-difficult decision. After years of ultra-low inflation, consumers have grown more resistant to price hikes, especially when they can easily compare prices online for household products and choose the lowest-price options. For that reason, many retailers may choose not to impose the cost of Trump's higher tariffs on their customers.

And the higher costs US importers face could be offset somewhat by the declining value of China's currency, which has the effect of making its products somewhat less expensive in the United States.

Still, the prices of certain goods will cost Americans more. Trump tacitly acknowledged this a few weeks ago by announcing a delay in his higher tariffs on $160 billion in imports until Dec. 15 — to keep them from squeezing holiday shoppers.

Even before the December tariffs, though, 52% of shoes and 87% of textiles and clothing imported from China were to be hit by Trump's tariffs, according to Peterson's Bown. And not even counting the increase — from 10% to 15% — that Trump announced for his new tariffs a week ago, JP Morgan had estimated that his import taxes would cost the average household roughly $1,000 a year.

"The story that holiday goods (were) given a reprieve is fake news," said Stephen Lamar of the American Apparel and Footwear Association. Overall, the 15% September and December tariffs will force Americans to pay an extra $4 billion a year for shoes and boots, according to a footwear trade group.

Retailers, engaged for a battle for survival with Amazon and other e-commerce rivals, are bracing for the worst. Macy's raised an alarm when it reported earnings in August: In May, Trump had raised separate tariffs on $250 billion in Chinese goods from 10% to 25%. In response, Macy's tried to raise prices of some items on the hit list — luggage, housewares, furniture. But according to CEO Jeff Gennette, customers just said no.

Some retailers are trying to force their suppliers to eat the higher costs so they won't have to raise prices for shoppers. Target confirmed to The Associated Press that it warned suppliers that it won't accept cost increases arising from the China tariffs. Some small retailers are even more vulnerable.

"Any cost increase puts us in a tough place," said Jennifer Lee, whose family owns the Footprint shoe store in San Francisco. "It makes it tough for business owners because we will have to take a hit on our margins, but it will also be difficult for us to pass it on to our shoppers."

Albert Chow, who owns Great Wall Hardware in San Francisco, said he's already raised prices on some Chinese-made products because an earlier round of tariffs led his suppliers to raise prices 10% to 20%.

"I will try to keep the prices down for as long as I can," Chow said. "But at some point, when the tariffs are just too much, we have to eventually raise the prices, and then it goes down to the end user — the customer."

What's frustrating for retailers is that consumers might otherwise be in an exuberant mood this holiday season: For most Americans, their jobs are safe and their wages are rising. Unemployment is near a half-century low.

Yet the economy itself looks increasingly fragile. Growth is slowing as the global economy weakens. And Trump's mercurial approach to trade policy — imposing, delaying, re-imposing import taxes via tweet — makes it nearly impossible for companies to decide on suppliers, factory sites and new markets. So they delay investments, further straining the economy.

"We worry about the average family in this country paying $500, $600, even $1,000 more annually because of the impact of tariffs," said Myron Brilliant, head of international affairs at the US Chamber of Commerce. "We worry about what it means for business confidence, business certainty and investment."