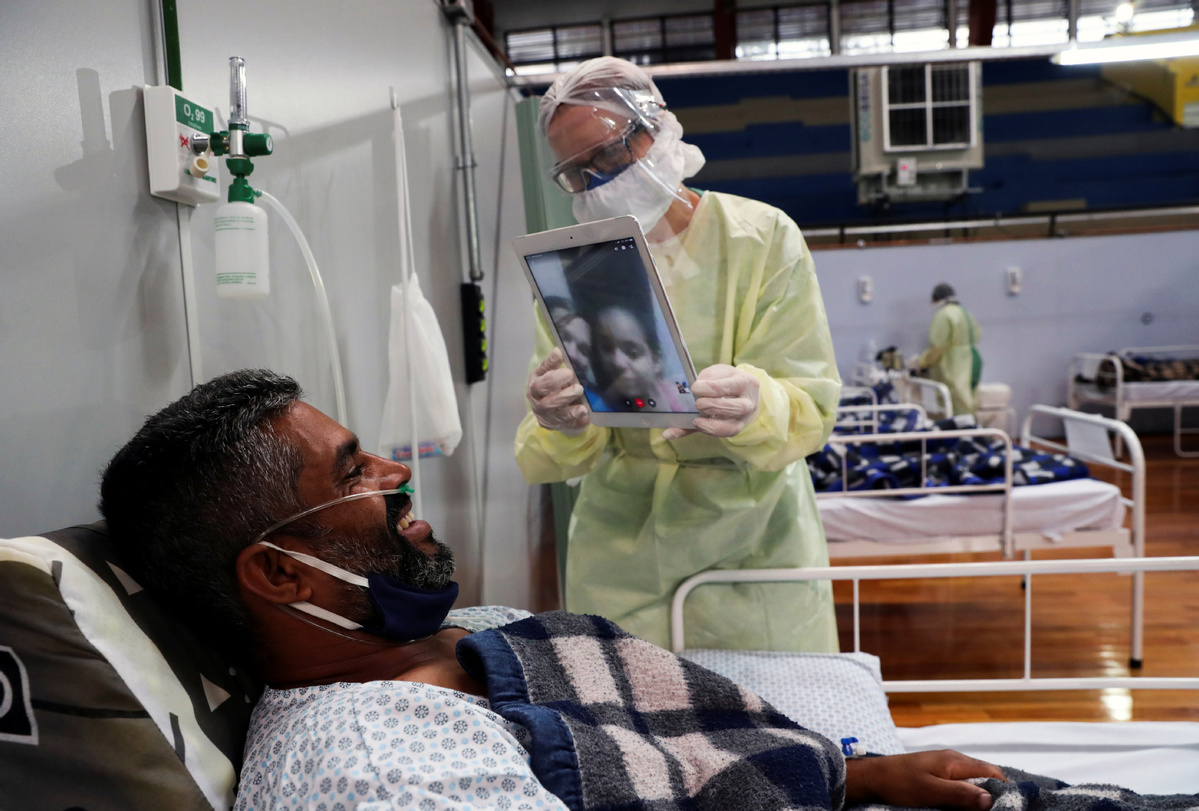 Fabiano Santana de Souza, 37, a patient suffering from the coronavirus disease (COVID-19) talks to his wife and daughter by a video call at a field hospital set up at a sports gym, in Santo Andre, Sao Paulo state, Brazil, May 6, 2020. (Photo: Agencies)

MEXICO CITY - Countries in Latin America on Sunday continued to report increases in COVID-19 infections and deaths, indicating the epidemic has yet to hit its peak in the region.

Brazil, the hardest-hit country in the region, registered 496 deaths in the past 24 hours, taking its death toll to 11,123, as 162,699 people have tested positive for the virus, registering a 6.8-percent mortality rate, said its health ministry.

Sao Paulo, Brazil's most populated state where the nation's outbreak began, continues to be most affected by the virus, with 3,709 deaths and 45,444 infections, followed by Rio de Janeiro with 1,714 deaths and 17,062 infections.

Peru's Health Ministry on Sunday reported a total of 67,307 confirmed cases and 1,889 fatalities.

The capital Lima continues to lead the country with 43,284 cases, the highest number of COVID-19 infections to date, the ministry said.

A lockdown and a curfew is in place nationwide through May 24.

In Chile, health authorities on Sunday reported 1,647 new cases and eight deaths in the past 24 hours, raising the total number of confirmed cases to 28,866 and deaths to 312.

Chile had previously planned to issue a type of discharge card to patients who have recovered from COVID-19, enabling them to return to work. But it has decided to postpone the measure to avoid discriminating against people still affected by the disease, Health Minister Jaime Manalich told reporters at a press conference.

Ecuador on Sunday reported 2,127 deaths from COVID-19, a spike from the 1,717 fatalities reported in the previous 24 hours, and the number of infections reached 29,559.

The substantial one-day increase in deaths was due to "a reclassification of deceased persons," according to the Ministry of Public Health.

"Once we concluded the clinical-epidemiological investigation of 410 deaths, we determined the deaths were caused by COVID-19, which is why they were reclassified as probable fatalities from the disease," the ministry said.

Authorities in the Dominican Republic on Sunday reported a total of 10,347 infections and 388 deaths, after 465 new cases were detected and three more patients died in the past 24 hours.

The average age of those infected is 41, while that of those who have died from the disease is 64, Public Health Minister Rafael Sanchez said.