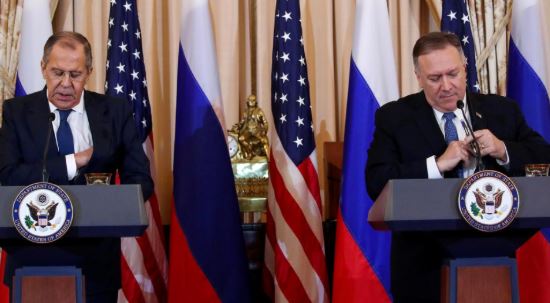 Russian Foreign Minister Sergei Lavrov and US Secretary of State Mike Pompeo held a phone conversation on Friday, discussing issues related to the coronavirus pandemic, oil market crisis and strategic stability, the Russian Foreign Ministry said in a statement.
"The foreign ministers continued to exchange views on the global situation caused by the coronavirus pandemic and instability in world oil markets. Both sides confirmed their readiness to continue coordination of actions in the interests of overcoming these urgent challenges as soon as possible," the ministry said.

Issues of strategic stability were also discussed, it said, adding that Lavrov reiterated the Russian proposal to extend the New Strategic Arms Reduction Treaty (New START), which expires in February 2021.

"It was emphasized that Russia is ready to work on possible new agreements on nuclear weapons," it said.Moscow and Washington signed the treaty in 2010, which stipulates the limits to the numbers of various strategic weapons possessed by both parties. The agreement can be extended for at most five years with the consent of the two countries. Despite Russia's willingness to extend it, the Donald Trump administration has declined to state a position.