WORLD Lavrov says Venezuela dialogue should have 'no preconditions'

Lavrov says Venezuela dialogue should have 'no preconditions' 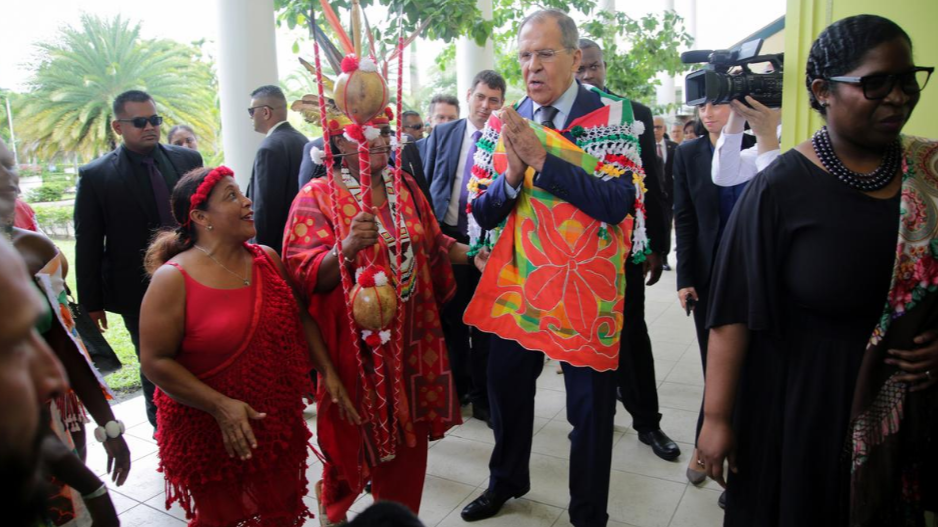 Russian Foreign Minister Sergei Lavrov said on Saturday a dialogue to resolve Venezuela's political crisis should have "no preconditions," as he visited the small South American country of Suriname at the end of a multination Latin American tour.
Venezuela's bitterly divided government and opposition are engaged in a dialogue mediated by Norway's government. The opposition, led by National Assembly president Juan Guaido, has insisted President Nicolas Maduro step down to allow a transition government to call fresh elections.

"We, just like our Surinamese friends, are convinced that it can result through a direct dialogue between the government and opposition with no preconditions, and without any threats that we hear coming from various capitals," Lavrov said alongside Surinamese Foreign Minister Yldiz Pollack-Beighle in the capital Paramaribo.
Earlier this week, Lavrov said Venezuela's opposition was in contact with Moscow, and that the world should foster dialogue in Venezuela rather than impose its own agenda.

Pollack-Beighle did not mention Venezuela during her remarks. During a meeting of the Mercosur trade bloc earlier this month, Suriname’s ambassador to Cuba, Marciano Edgar Armaketo, said the country’s position on Venezuela was based on "non-interference in the affairs of states."
Meanwhile, Venezuela's Supreme Court of Justice (TSJ) annulled on Friday the opposition-controlled National Assembly's decision to reinstate the country into the Inter-American Treaty of Reciprocal Assistance, commonly known as the Rio Pact.
The court said the decision to rejoin the pact "is an assault on the rule of law and to all the public powers of Venezuela" and that only the head of state has the authority to direct the nation's foreign relations.
Signed among many countries of the Americas in 1947 in Rio de Janeiro, the pact was designed to be a mechanism of mutual defense and states that an attack on any of the region's countries is tantamount to an attack on all.
Venezuela withdrew from the pact on May 14, 2013.