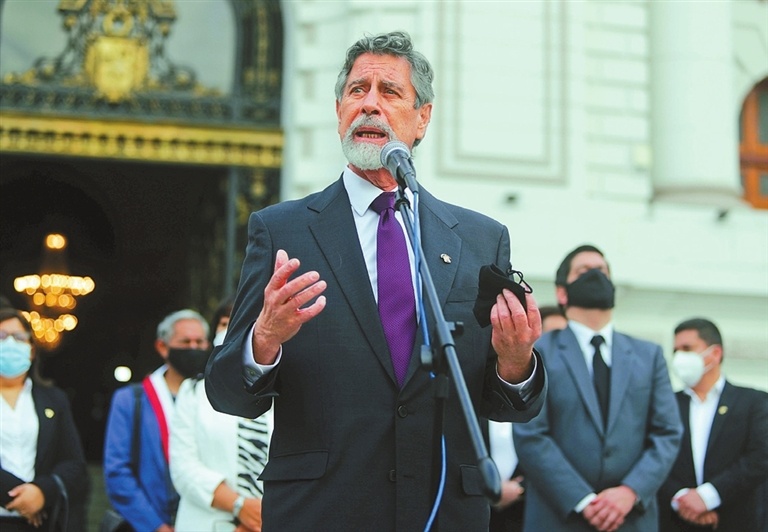 PERU’S Congress on Monday chose legislator Francisco Sagasti as the Andean country’s caretaker president, in an attempt to defuse a sharp political crisis after angry protests and the departure of two presidents in the past week.

Sagasti, 76, from the centrist Morado Party, won enough votes to head Congress, which means he will constitutionally assume the presidency of Peru ahead of national elections called for April.

Sagasti will be Peru’s third president in a week, after interim leader Manuel Merino resigned Sunday, five days after being sworn in following the ousting of centrist Martin Vizcarra.

The removal of Vizcarra, who was popular with many Peruvians but angered lawmakers with his push for anti-corruption measures and attempts to curb parliamentary immunity, sparked days of protests that led to the deaths of two men.

“Today is not a day of celebration,” Sagasti said, striking a somber tone in his first words after taking office in Congress. “We cannot go back, bring them back to life, but we can take action from Congress, from the Executive, so that this does not happen again.”

Sagasti, a former World Bank official and engineer, faces a formidable challenge to bring stability to the world’s No. 2 copper producer, which was already hard hit by COVID-19 and heading for its worst economic contraction in a century.

Shortly after the vote, Sagasti stepped outside the Congress building, raising his hand to the cheers of onlookers. Crowds in Lima’s central plaza also greeted his election with jubilee.