Lawyer's office shot at after cop's acquittal in teen death 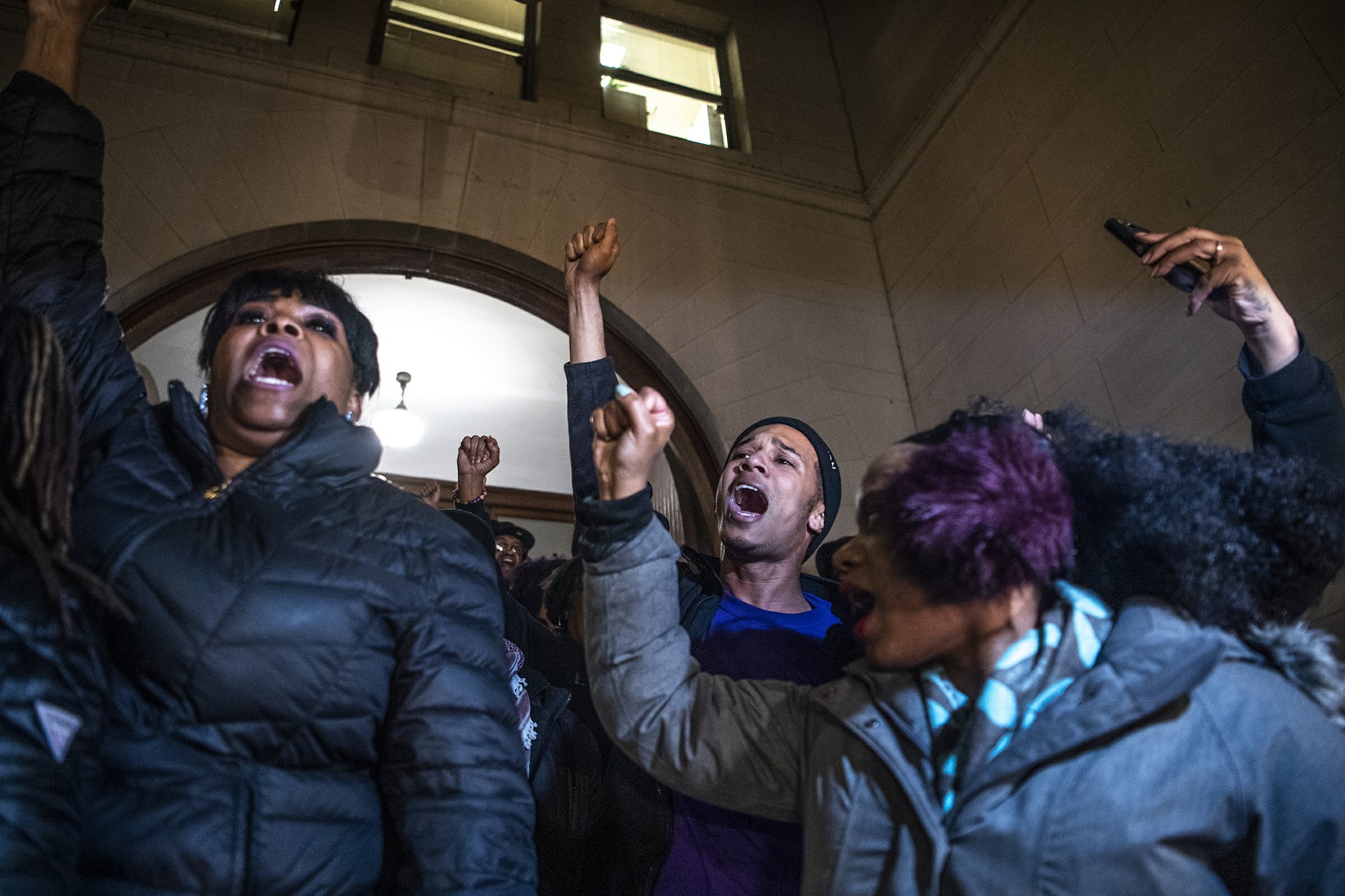 Gunshots were fired overnight through the office window of the attorney for a white police officer acquitted in the shooting death of an unarmed black teenager — a verdict that left Pittsburgh a city on edge Saturday.

The jury’s decision late Friday in the killing of 17-year-old Antwon Rose II left his family distraught but not surprised and touched off a nighttime demonstration by about 100 people that led to no arrests or property damage.

Five to eight shots were fired into the building where defense attorney Patrick Thomassey works, police in nearby Monroeville said. Police said they had been staking out the place as a precaution when they left to answer another call around midnight, and that was when bullets hit a window and the front wall. No one was hurt.

Former East Pittsburgh Police Officer Michael Rosfeld was charged with homicide for shooting Rose in the back as the teenager ran away from a traffic stop last June. Rosfeld walked out of the courtroom a free man Friday after jurors rejected the prosecution’s argument that he acted as Rose’s “judge, jury and executioner.”

“I hope that man never sleeps at night,” Rose’s mother, Michelle Kenney, said of Rosfeld, according to the Pittsburgh Post-Gazette. “I hope he gets as much sleep as I do, which is none.”

The verdict leaves Rose’s family to pursue the federal civil rights lawsuit they filed last August against Rosfeld and East Pittsburgh, a small municipality about 10 miles (16 kilometers) from downtown Pittsburgh.

Rose’s death — one of many high-profile killings of black men and teens by white officers in recent years — spurred angry protests in the Pittsburgh area last year, including a late-night march that shut down a major highway.

After the verdict, a group of about 100 protesters headed to the trendy East Liberty neighborhood, a few miles from the downtown Pittsburgh courthouse, where they blocked intersections and briefly entered two hotels, chanting “17” for Rose’s age and reading a poem written by Rose.

Police said the demonstrations were peaceful and only a few garbage cans and newsstands were kicked over, both of which were quickly picked back up.

Rose was riding in an unlicensed taxi that had been involved in a drive-by shooting minutes earlier when Rosfeld pulled the car over and shot the teenager in the back, arm and side of the face as he ran away.

The former officer told jurors he thought Rose or another suspect had a gun pointed at him, insisting he fired to protect himself and the community. Neither teen was holding a weapon when Rosfeld opened fire, though two guns were later found in the car.

The 12-person jury — including three black members — saw video of the fatal confrontation. The acquittal came after less than four hours of deliberations on the fourth day of the trial.

Rose “posed no threat whatsoever to Rosfeld or others,” said the family’s lawyer, Fred Rabner. “Make no mistake, there is nothing reasonable or appropriate about the manner Officer Rosfeld took Antwon’s life.”

Thomassey, the defense lawyer, told reporters that Rosfeld is “a good man. He said to me many times, ‘Patrick, this has nothing to do with the kid’s color. I was doing what I was trained to do.’”

Thomassey said he hopes the city remains calm and “everybody takes a deep breath and gets on with their lives.”

Rosfeld had worked for the East Pittsburgh Police Department for only a few weeks and was sworn in just hours before the shooting.

Prosecutor Jonathan Fodi argued that Rosfeld had acted as “judge, jury and executioner” and that the video evidence showed “there was no threat” to the officer. “We don’t shoot first and ask questions later,” the prosecutor added.

But a defense expert testified Rosfeld was within his rights to use deadly force to stop suspects he thought had been involved in a shooting. Prosecutors did not call their own use-of-force expert.

“The prosecution’s handling of this case, particularly the decision not to call a police expert, raises many questions,” said Reggie Shuford, executive director of the American Civil Liberties Union of Pennsylvania.

Shortly before the traffic stop, Rose had been riding in the front seat of the cab when another occupant, Zaijuan Hester, in the back, rolled down a window and shot at two men on the street, hitting one in the abdomen.

Hester, 18, pleaded guilty last week to aggravated assault and firearms violations. He told a judge that he, not Rose, did the shooting.

Prosecutors had charged Rosfeld with an open count of homicide, meaning the jury had the option of convicting him of murder or manslaughter.