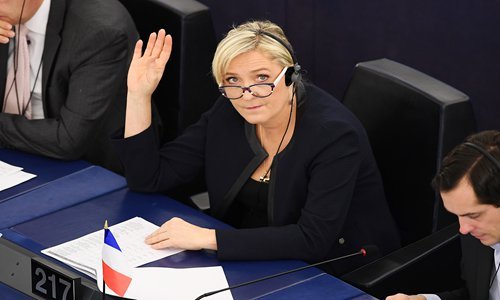 Marine Le Pen takes part in a voting session at the European Parliament in Strasbourg, eastern France on November 22.

The French far right of Marine Le Pen failed to win any region while the centrist ruling party of President Emmanuel Macron suffered another poll drubbing in the second round of regional elections Sunday, again marked by a woeful turnout.

In a confirmation of trends set in the June 20 first round, partial results showed the National Rally (RN) of Le Pen was thwarted in its main ambition of winning the Provence-Alpes-Cote d'Azur (PACA) region that includes Marseille and Nice.

Macron's ruling party could not even break into double figures nationwide let alone win any region, in a jolt as the president begins to turn his sights on re-election in 2022.

Victory in the Mediterranean region would have given Le Pen control of one of France's 13 mainland regions for the first time and added impetus to her challenge to Macron in the presidential elections.

"This evening we have not won any region," said a disappointed Le Pen, blaming "unnatural alliances" between foes and saying that "mobilisation is the key" to victories in the future.

But the outcome marks a boost for the traditional right-wing The Republicans as well as the Socialist Party, who were squeezed after the centrist Macron surged into power in 2017 with his brand-new Republic on the Move (LREM) party.

While analysts warn against extrapolating too much from regional elections, they underline that it is not a forgone conclusion that the 2022 presidential race will be a straight Macron-Le Pen duel.

There was cross-party concern over the turnout for last week's polls and the second round marked barely any improvement, with over 66 percent of the electorate not casting their votes, according to an estimate by Ifop Fiducial.