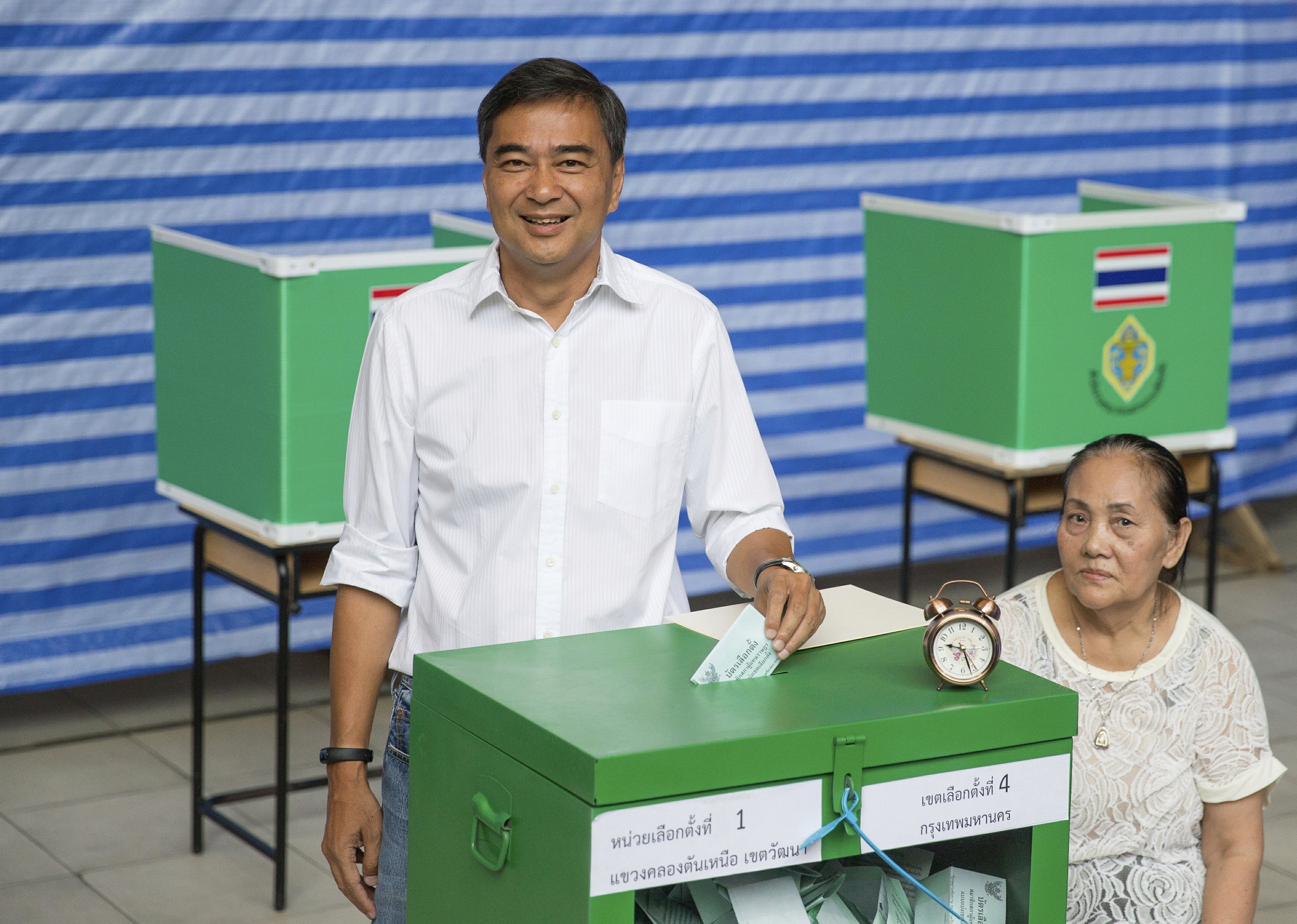 Democrat Party leader Abhisit Vejjajiva casts his vote at a polling station in Bangkok, Thailand, Sunday, March 24, 2019, during the nation's first general election since the military seized power in a 2014 coup. (Photo: AP)

The leader of Thailand’s oldest political party has resigned after his party’s poor showing in the country’s general election.

The Democrats received about 2.98 million votes out of a preliminary total vote count of about 33 million.

Abhisit told The Associated Press this past week that he would resign if his party won fewer than 100 seats in the House of Representatives. Projections suggest that the Democrats might win about half that number or less.

Figures from Thailand’s Election Commission show a military-backed party has taken the lead in the country’s first election since a 2014 coup.

With 89 percent of votes counted, the Palang Pracharat party has 7 million votes and Pheu Thai, which was the governing party ousted by the coup, has 6.6 million.

The vote counts suggest coup leader and prime minister Prayuth Chan-ocha has a chance of staying in power by forming a coalition government with the help of a 250-member junta-appointed Senate.

A poll for Thailand’s first election since a 2014 coup predicts the Thaksin Shinawatra-allied Pheu Thai party will win the most parliamentary seats by a large margin but not enough to choose the country’s next prime minister. The poll, taken in the days before the election, was released after voting closed Sunday.

The Suan Dusit poll of nearly 80,000 voters forecasts Pheu Thai to win 173 seats in the 500-member parliament, compared with 96 for the military-backed Palang Pracharat party.

Parliament plus 250 junta-appointed senators will decide the next prime minister by simple majority.

Small parties are likely to have a big say in which party leads a coalition government, with groupings of the major pro- and anti-junta parties neck and neck in number of seats, according to the poll.

Voting has ended in Thailand’s first election since a 2014 military coup. Some results are expected within several hours, but the formation of a government may take weeks of horse-trading.

About 51 million people were eligible to vote Sunday in an election that pitted a military-backed party against the populist political force the generals overthrew.

Thais voted for a 500-member parliament, of which 350 lawmakers are elected from constituency races and 150 based on parties’ share of the overall vote. Those 500 combined with a 250-member junta-appointed Senate will decide who becomes prime minister.

Thailand’s prime minister and junta leader has played golf after voting in the country’s first election since the 2014 coup he led.

Prayuth Chan-ocha appeared to be in high spirits, but his security team did not allow reporters to follow him on to the golf course.

Prayuth left the golf club midafternoon Sunday and went to an army base to await election results.

Voting stations close at 5 p.m. and some indication of results is expected later Sunday evening.

Prayuth is hoping to stay in power through a military-allied political party and measures that dilute the influence of other political parties.

The leader of the Pheu Thai political party that was ousted as Thailand’s government in a 2014 military coup says she’s confident of winning Sunday’s election.

Speaking to reporters after voting in Bangkok, Sudarat Keyuraphan said: “I don’t say it’ll be a landslide. I don’t know. Depend on the people. But I think we can win this election.”

Thais are voting for a 500-member parliament that along with a 250-member junta appointed Senate will decide the country’s next prime minister.

Prime Minister Prayuth Chan-ocha, the army chief who led the 2014 coup, is hoping to stay in power through a military-backed political party and measures that dilute the influence of other political parties.

Thailand’s King Maha Vajiralongkorn has issued a statement as Thais vote in their first election since a 2014 coup that says the role of leaders is to stop “bad people” from gaining power and causing chaos.

Invoking a speech by his father, the previous Thai king who died in 2016 after reigning for seven decades, Vajiralongkorn said not all citizens can be transformed into good people so leaders must be given support in ruling to create a peaceful nation.

He urged government officials, soldiers and civil servants to look after national security.

Prime Minister Prayuth Chan-ocha, the army chief who led the 2014 coup, is hoping to extend his hold on power after engineering a new political system that aims to stifle the influence of big political parties not aligned with the military.

Voting is underway in Thailand’s first election since the military ousted an elected government in a 2014 coup.

Prime Minister Prayuth Cha-cha, the army chief who led the coup, is hoping to extend his time in power after engineering a new political system that aims to stifle the influence of big political parties not aligned with the military.

About 51 million Thais are eligible to vote Sunday. Leaders of civilian political parties have urged a high turnout as the only way to derail Prayuth’s plans.

The election is the latest chapter in a nearly two-decade struggle between conservative forces including the military and the political machine of Thaksin Shinawatra, a tycoon who upended tradition-bound Thailand’s politics with a populist political revolution.