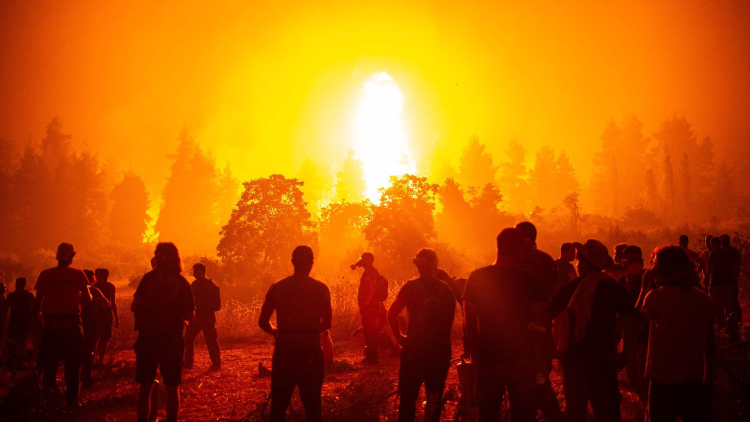 A UN-appointed panel of experts said Monday that the Earth is getting so hot that temperatures in about a decade will probably blow past the most ambitious threshold set in the Paris Agreement, increasing the risk of extreme weather and long-term climate-related disasters.

Politicians, scientists and activists were swift to react:

"(The report is) a code red for humanity. The alarm bells are deafening, and the evidence is irrefutable: Greenhouse gas emissions from fossil fuel burning and deforestation are choking our planet and putting billions of people at immediate risk."

"The new IPCC report contains no real surprises. It confirms what we already know from thousands previous studies and reports – that we are in an emergency. ... It is up to us to be brave and take decisions based on the scientific evidence provided in these reports. We can still avoid the worst consequences, but not if we continue like today, and not without treating the crisis like a crisis."

"The impacts of the climate crisis, from extreme heat to wildfires to intense rainfall and flooding, will only continue to intensify unless we choose another course for ourselves and generations to come. What the world requires now is real action. All major economies must commit to aggressive climate action during this critical decade."

"To those who seek to argue that it's too hard, or too late, and so not worth trying, the report is a reminder that every fraction of a degree of warming really does matter."

— Mary Robinson, former Irish president and chair of The Elders, an independent group of former world leaders campaigning for peace and human rights

"We know what must be done to limit global warming – consign coal to history and shift to clean energy sources, protect nature and provide climate finance for countries on the front line."

"Those of us living in Africa have been aware of the urgency of the climate crisis for many years. Lives and livelihoods have been shattered by overwhelming heat, rising seas and extreme weather."

"The world must urgently wind down fossil fuel supply in an orderly and transparent way and halt high-risk high-cost oil and gas exploration now. That, or face physical catastrophe, stranded assets costs in the hundreds of billions to our infrastructure and a shock to the world economy a thousand times greater than the COVID-19 pandemic."

"Africa, which has contributed only 3 percent to global historic emissions, needs big emitters to take responsibility."

"The climate emergency is intensifying each day, and we in the Climate Vulnerable Forum, representing the most climate-vulnerable nations in the world, are on the front line – our nations battered by storms, droughts and rising seas."

— Mohamed Nasheed, former president of the Maldives who now represents a group of 48 countries particularly at risk of global warming

"The report confirms in an impressive way the connection between man-made climate change and weather extremes. Floods after heavy rains, as we have just experienced, are increasing, as are heat waves and forest fires, which have plagued us in recent years."

"This report is yet more unimpeachable proof that climate change is happening now, and that global warming is already one of the most harmful drivers of worsening hunger and starvation, migration, poverty and inequality all over the world."