Leaders struggle to make sense of fatal attack on synagogue 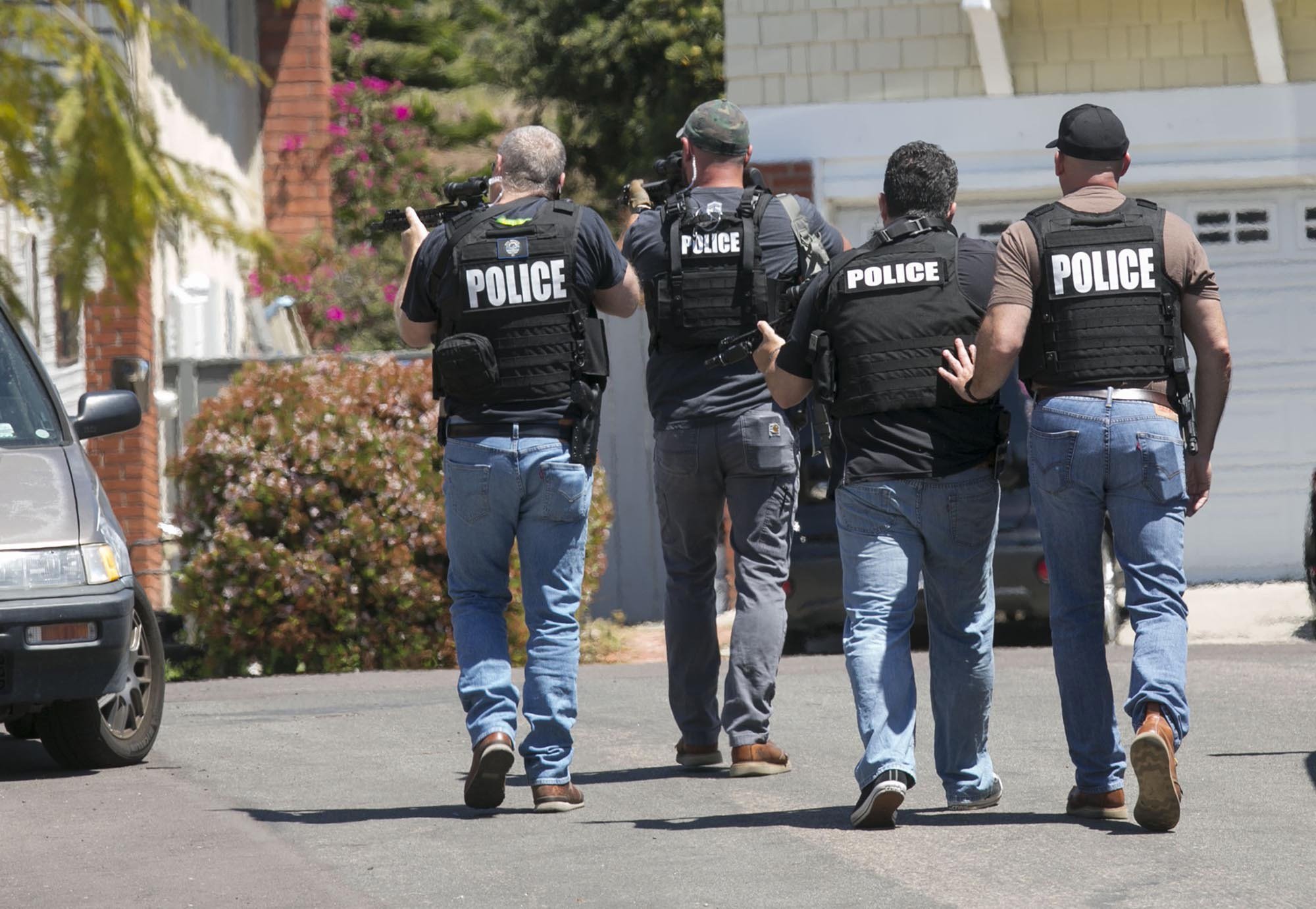 Heavily armed San Diego police officers approach a house thought to be the home of 19 year-old John T. Earnest, who is a suspect in the shooting of several people in a Poway synagogue in San Diego, California on April 27, 2019.  (Photo: AP)

The rabbi who led a service on the last day of Passover suffered a gunshot wound to his hands and two others endured shrapnel wounds as political, civic and religious leaders across the country struggled to make sense of another fatal attack on a house of worship six months after a mass shooting in a Pittsburgh synagogue.

John T. Earnest, 19, surrendered to police after bursting into Chabad of Poway, north of San Diego on Saturday and opening fire with about 100 people inside, killing Lori Kaye, 60, and injuring Rabbi Yisroel Goldstein, Noya Dahan, 8, and Almog Peretz, 34, authorities said.

Earnest, who had no previous contact with law enforcement, may be charged with a hate crime in addition to homicide, San Diego County Sheriff William Gore said. Earnest is also being investigated in connection with an arson attack on a mosque in nearby Escondido, California, on March 24.

Goldstein told “Today” in a phone interview he was in the middle of his sermon when he heard loud noises. He turned around and saw he was “face-to-face with this murderer, this terrorist.” He said he put his hands up to protect himself and lost one of his fingers in the shooting.

There were indications an AR-type assault weapon might have malfunctioned after the gunman fired numerous rounds inside, Gore said. An off-duty Border Patrol agent working as a security guard fired at the shooter as he fled, missing him but striking his getaway vehicle, Gore said.

Shortly after fleeing, Earnest called 911 to report the shooting, San Diego Police Chief David Nisleit said. When an officer reached him on a roadway, “the suspect pulled over, jumped out of his car with his hands up and was immediately taken into custody,” Nisleit said.

Goldstein described Kaye as a “pioneering, founding member” of the congregation and says he is “heartbroken” by her death.

A friend of Kaye’s, Audrey Jacobs, said on Facebook that she was “taking bullets” for the rabbi to save his life, and the rabbi continued to give his sermon after being shot.

Almog Peretz, who had moved to California a few months ago from the rocket-battered town of Sderot in southern Israel near the Gaza border, said a man entered the synagogue and started shooting in all directions.

“I was with my back to the shooter. I heard a shot or two and then turned around to face him and that’s when he fired at me. I ran quickly, picking up a small girl in my hands,” he recalled in conversation with the Israeli YNet news site. “He hit me once in the leg and I kept running. I didn’t feel it much since there we so many bullets flying by. I heard them and I saw them right next to me.”

Gore said authorities were reviewing copies of Earnest’s social media posts, including what he described as a “manifesto.”

A person identifying themselves as John Earnest posted an anti-Jewish screed online about an hour before the attack. The poster described himself as a nursing school student and praised the suspects accused of carrying out deadly attacks on mosques in New Zealand last month and at Pittsburgh’s Tree of Life synagogue Oct. 27.

“It was a hate crime, no doubt about it,” national security adviser John Bolton said on “Fox News Sunday.” He said investigators have not seen any connection between the suspect and other extremist groups.

California State University, San Marcos, confirmed Earnest was a student on the dean’s list and said the school was “dismayed and disheartened” that he was suspected in “this despicable act.”

There was no known threat after Earnest was arrested, but authorities boosted patrols at places of worship as a precaution, police said.

Minoo Anvari, a member of the synagogue, said her husband was inside during the shooting. She said he called to tell her the shooter was shouting and cursing.

She called the shooting “unbelievable” in a peaceful and tight-knit community. “We are strong; you can’t break us,” Anvari said.

Rabbi Yonah Fradkin, executive director of Chabad of San Diego County, said that “in the face of senseless hate we commit to live proudly as Jews in this glorious country. We strongly believe that love is exponentially more powerful than hate. We are deeply shaken by the loss of a true woman of valor, Lori Kaye, who lost her life solely for living as a Jew.”

Donny Phonea, who lives across the street from the synagogue, turned off his power drill and heard someone shout, “Police!” Then he heard three or four shots.

The 38-year-old bank auditor looked over his backyard fence facing the synagogue and saw people hiding behind an electrical box in the parking lot of a neighboring church. At that point, he knew something was “very, very wrong,” went inside and closed his doors and garage.

“I’m a little taken aback,” said Phonea, who moved to Poway two weeks ago. “I moved here because safety was a factor. Poway is very safe.”

“Our entire nation mourns the loss of life, prays for the wounded and stands in solidary with the Jewish community,” Trump said later at a rally in Wisconsin. “We forcefully condemn the evils of anti-Semitism and hate, which must be defeated.”

Gov. Gavin Newsom said he joins the community in grief.

“No one should have to fear going to their place of worship, and no one should be targeted for practicing the tenets of their faith,” he said.